From RationalWiki
(Redirected from En Marche!)
Jump to navigation Jump to search
This

is also a macron. 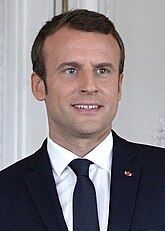 That's the face of a man who thinks, "How bad were you that people looked to me for help?"

Emmanuel Jean-Michel Frédéric Macron (1977–), commonly known as Emmanuel Macron, is the 8th President of the Fifth Republic of France, having twice defeated the then-leader of Front National (which, after the meteoric loss, was renamed to National Rally) turned independent Marine Le Pen in the second round of the 2017 and 2022 elections. He won in a landslide: 66.1% to Le Pen's 33.9%; but since then his approval ratings dropped considerably, though he was still able to win a 58% of the vote in 2022. A former member of the centre-left Socialist Party, which he left in 2009, in 2016 he founded La République En Marche !, a centrist and pro-European coalition. From tax cuts to "Islamo-Leftism", the default state of his presidency has always been "controversial."

The age difference between him and his wife attracted significant media attention (as well as the inevitable jokes referencing a certain Van Halen song, once people know the full story).

He wants a two-state solution to the Israel-Palestine crisis.[3]

He said that France must acknowledge responsibility for deporting thousands of Jews to Nazi Germany in WWII.[3]

He wants a gender-balanced cabinet.[3]

He opened medically-assisted procreation to all cisgender women.[4]

He implemented a system of bonuses and penalties to encourage companies to make more unfixed term contracts.[5] He's a typical (classical) "liberal", which in Europe means he supports free markets over a welfare state (the U.S. idea of a liberal is very different from the rest of the world). As President, in order to fight unemployment, (something that every French president failed at since 1980) he signed into law several reforms that, according to critics, would gut labour in France, including giving employers more flexibility to negotiate pay and conditions with their workers and makes it easier to lay off staff. A cap has also been set on the "amount of compensation awarded by industrial courts" in cases of unfair dismissal — a "key demand of bosses" who complain that "lengthy" and "costly" court cases discourage them from hiring staff in the first place.[citation needed] The reforms, in fact, were inspired by the models adopted in Germany, Denmark and Sweden, and even received overall support from the CFDT, France's most influential union.[6][7] The reforms did succeed at tackling the chronical unemployment problem in France,[8][9][10] with some regions of the country even facing labor shortages,[11] something impressive considering that the world faced an economic slowdown in the years after the reforms.[12] Macron resorted to executive orders for these labour reforms, with the blessing of a parliament dominated by his Republic on the Move (LREM) party.[13]

He wants to create a European minimum wage.[14]

He said that Africa's problems are 'civilizational' and happen because of women having '7 or 8' kids (which is true for only one or two out of over fifty African states),[15] not because of colonialism.[note 1] Never mind that Africa is a giant and extremely diverse continent with each country varying a lot from each other.

Many have argued that Macron's tax-cuts (e.g., his 70% reduction of the wealth tax) overwhelmingly benefit the top 0.1%.[3] However, Macron has argued that the higher taxes of the past have backfired and resulted in many successful people leaving the country.[16] He argues that these cuts are necessary to stimulate economic growth.

He effectively made the state of emergency permanent by granting police unprecedented powers to harass citizens for the sake of anti-terrorism.[17] His labor reforms caused a string of layoffs throughout French society, and despite having a supermajority, accomplished these reforms by executive order, completely undercutting parliamentary debate and any potential amendments to soften its blow.[18]

En Marche! is a centrist French political party founded by Macron himself after ditching the Socialists. It literally translates to something along the lines of "On the March!", which would sound very odd in English. A better translation would be "forward" or "onward". It also shares Emmanuel Macron's initials... Founded in 2016, the party took France by storm in the 2017 elections, making Macron president, winning an absolute majority in the National Assembly, and winning a decent minority of the French Senate. The party is arguably the most pro-European major party in France.

On 17 November 2018, the Yellow Vests (Gilets jaunes) protests began, protesting over high fuel tax, low minimum wage, and high living costs. On its first day of protests, one person was killed and over a hundred were injured.[19] The protests stopped in March 2020, with the emergence of Covid and bans of gatherings, though some did resume again in September when restrictions loosened. Since they began, 11 people have been killed and over 4,000 have been injured.

Some protests took place in Paris following his 2022 re-election.[20]