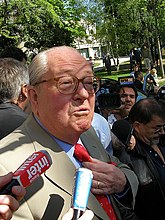 Jean-Marie Le Pen in 2007, ready to discharge verbal feces at you.

Jean-Marie Le Pew Le Penis (1928–) is a holocaust denier and co-founder and former leader of the French far-right party Front National (renamed in 2018 as National Rally). He was the president of that party since its creation in 1972 until his retirement in 2011 when he was succeeded by his also-racist daughter Marine Le Pen. He is a zealous Roman Catholic and, in accord with his socially conservative views, one of his primary goals was to "clean up" France of "lazy immigrants" and to put Catholic policy back into French politics.

He is notable for having managed to advance to the second round of the 2002 presidential election, partly due to left-wing division, earning a "democracy defense" victory for his mainstream conservative rival Jacques Chirac. Also noteworthy: in August of 2015, he was kicked out of the party he founded, which is good even if it was largely a cynical PR move. Of course, he is also admired by American counterparts Ann Coulter and Pat Buchanan notwithstanding his anti-Americanism.

See the main articles on this topic: Racism and Holocaust denial

He said that the gas chambers were "a minor point" in the history of the Second World War, proclaiming his belief in the "inequality between the races".

See the main article on this topic: Algeria
Le Pen was accused of torture by French mainstream newspaper Le Monde, which Le Pen has repeatedly denied[3] even though he was quoted by the newspaper Combat in 1962 as saying:

We tortured in Algeria because it had to be done.[3]

Le Pen lost a defamation lawsuit against Le Monde regarding their accusation of torture against him.[4] Committing torture during war is considered a war crime.

Le Pen has called for the forced quarantine of people with AIDS.[5] And he thinks the Nazi occupation of France "wasn't really so bad".[6]

Lovely guy; his antics eventually became too extreme even for his (slightly-less-bigoted) daughter Marine, leading her to expel him from the party in 2015.[7]