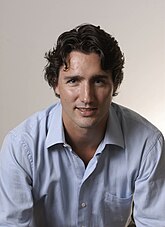 Auditioning for the latest boy band.

Justin "Joe" Pierre James "Comeback Kid" Trudeau (born 1971) is the 23rd and incumbent Prime Minister of Canada, and current leader of the federal Liberal Party of Canada. He is widely accepted as a dreamboat (for a politician anyway), because he's the hottest politician ever,[2][3][4][5][6] and is a (self-proclaimed) feminist,[7] advocate of legalizing marijuana,[8] LGBTQ-friendly,[9] pro-choice,[10] pro-immigrant,[11] climate science defending[12][13] and as such is antithetical to both his predecessor, Stephen Harper, and his American counterpart, Donald Trump. He is the son of Pierre Elliot Trudeau, the 15th Prime Minister of Canada and reputed "ladies man".[14] Like father, like son,[15] we guess.[16] As a result, Trudeau enjoys a sort of "Canadian royalty" status amongst the media. As a matter of fact, he is a millionaire, who inherited CAN$1.2 million from his father, who, in turns, got his fortune from his father.[17]

Trudeau is bilingual (a fact he really wants you to remember), and as a politician in bilingual Canada this has helped him immensely, especially when compared to the The Conservative Party of Canada's new leadership hopeful's attempts at grasping the language.[18][19] Alas, he could not save himself from probably the most awkward bilingual backfire ever, when he swore allegiance to Queen Elizabeth II, her "hairs" and successors.[20]

Despite his rhetoric on environmental protection, Trudeau supports the further opening up of the Alberta tar sands, some of the world's greatest current climate disasters, thus like his counterpart undermining effective climate change policies, just in a different and, to quote The Guardian, "hypocritical" way. His government spent billions to acquire tar sands pipelines, which effectively makes Trudeau and all future prime ministers oil executives.[21] [22] [23] On the subject of hypocrisy, although Trudeau promised to combat tax avoidance when he was running for Prime Minister, an aide and donor to his campaign, Stephen Bronfman, is linked to an offshore tax evading scheme unearthed by the leak of the "Paradise Papers" in 2017. Notably, Bronfman considers the Prime Minister to be "very, very saleable."[24] Following the leak of the "Panama Papers" in 2015, which implicated numerous Canadians, the Prime Minister was quick to deny any wrongdoing.[17]

Like Trump,[25] he has consented to the sale of arms to Saudi Arabia,[26] a country with a notorious human rights record including involvement in the Yemen Civil War. It should be noted, however that his American counterpart initiated the sale whereas in Trudeau's case, it was his predecessor who started it. His plan for public infrastructure is similar to Trump's: sell off public assets, pay private investors to finance construction, hire private firms to build, and let the taxpayer pay the tab. This includes setting up a private infrastructure bank under Cabinet control, immediately undercutting any independence for the infrastructure bank. [27]

But wait, there's more! He's also a giant media whore... just like his counterpart![28] Which counterpart? That would be Barack Obama (or Tony Blair for that matter), who was also very image-conscious and sensitive to perception changes by the press. Justin's also following his father's footsteps in this, as Pierre was the original "Trudeaumania."

In 2016, after Fidel Castro's death, he described Castro in a favourable light, believing he had "tremendous dedication and love for the Cuban people", and that he "made significant improvements to the education and healthcare of his island nation" without mentioning the horrific human rights abuses or intolerance of dissent.[29] Following this praise, wingnuts at /r/The_Donald decided to concoct a conspiracy theory that Trudeau was literally the son of Castro (spread by the likes of Milo Yiannopoulos), based on the fact that Castro and his mother met at one time in 1971.[30] In a similar case of oddity, Trudeau junior praised, in his own words, the Communist "dictatorship" of China, of all places.[31]

Trudeau has always made clear his support for free trade agreements in general and the Trans-Pacific Partnership (TPP) in particular, even if a key player, the United States, has decided to withdraw from it. Perhaps ironically, Trudeau missed the rounds of negotiations taking place in Vietnam, where he was visiting for the 2017 APEC summit. He blamed his absence on a "schedule mix-up".[32] Either he's lying and thinks he can bargain for a better position, or it really was a schedule mix-up, and if so, this brings into question how organized he and his government are overall. He's also missed a worrying amount of question periods, and his performance in such has been... questionable.[33] In one particular showing, Trudeau set what is perhaps a record in the Commonwealth world by managing to avoid a question over a dozen times and then some more.[34]

In February 2017 he abandoned his campaign promise that the 2015 election would be the last election using the broken first-past-the-post, a promise which is still live on the Liberal party's website.[35] He had been speaking vaguely about "ranked ballots" since before the election, but the all-party committee on electoral reform found that such a system would produce more disproportionate results than even the existing system and instead recommended a referendum on proportional representation. Trudeau thought long and hard about this and came to the decision that proportional representation would hurt the Liberal party was not in the interest of Canadians and that there was no consensus (even though the committee's recommendation was unanimous). In the process of sabotaging reform, the self-proclaimed feminist had his Minister for Democratic Institutions (who holds a science degree) stand up in front of the house and act like math is hard.[36]

His absolute worst issue. Trudeau spends goverment money way, way too much. After over five years, he has managed to get Canada to an outrageous $381,000,000,000 deficit.[37] He seems to be unable to remain transparent about how he is using it, and has managed to appoint two of the worst finance ministers in recent Canadian history, the scumbag Bill "MoneyBags" Morneau, and the newest self-righteous asshole Chrystia Freeland. His cronyism has also been personified through scandals, notably the WE Charity controversy

(page pending). We really do not want austerity to return to Canada, so if Trudeau could stop spending so ludicriously, that would be nice.

Despite his long list of failings, Justin Trudeau has done some truly incredible things since becoming Prime Minister. He pretty much forced the CPC to grow a backbone, and considering their most recent election of leader, this seems to have become tangible. Comparing him to Harper would just be so utterly unfair. Speaking of...

Trudeau overturned many of Harper's most odious policies, like removing the gag rule on scientists, putting actual experts (mostly) in his Cabinet, backing away from thinly-veiled majoritarian democracy, and restoring the census after Harper randomly removed it. Think of any Harper policy and Trudeau most likely removed or watered it down. When next to his American counterpart, Trudeau's social liberalism (pro-gay rights, pro-women's rights, pro-minority rights) feel like a breath of fresh air, or so it seems from the outside.

This includes his resolutely pro-choice beliefs; as soon as he took leadership, he forced the party to support pro-choice policies and candidates regardless of their religious beliefs, which angered many of the Christian old-timers. Republicans must be fuming down south.[38][39][40]

The Senate, long-since mired in partisanship, was pretty substantially reformed under Trudeau. In one of his first moves as Liberal leader, he immediately expelled all Liberals from the Senate by de-registering them as party members; effectively abolishing the Liberal Party caucus in the Senate. This stunned just about everyone, especially "key party operators and fundraisers" in the Senate who had been removed from the party's caucus and forced outside its inner circles with this move. The CBC called this "a foundation-shaking decision in a business where power is derived from membership in a political club and the ability to access its best back rooms." [41] He set up a non-partisan advisory board designed to pick candidates for the Senate based on merit rather than partisan chops, [42] [43] and all of his Senate appointees have been from independents [44] albeit they've mostly toed the Liberal Party line. [45] By June 2018, Trudeau's nonpartisans numbered at 43, the Conservatives at 32, the (former) Liberals at 11, non-affiliated at 6, and 11 vacancies.[46] Since Senators are organized by their party, these independents had barely any organizational support, so they formed the Independent Senators Group, the largest caucus in the Senate as of 2017. The ISG promotes nonpartisanship and accountability for the Senate.[47] By 2020, Trudeau's Senate appointments numbered a staggering 51 out of 95, Stephen Harper had 32 senators, Jean Chretien had 8, and Paul Martin had 4, with 14 mandatory retirements before the end of 2023, the next scheduled general election. Should Trudeau fill the ten current vacancies and the 13 soon to be vacancies before December 2023 (October 2023 is the latest possible date for the general election), he would have appointed 74 out of 105 senators. [48]

Perhaps his signature achievement, because it's the perfect encapsulation of his incrementalism. Marijuana was legalized in the autumn of 2018, nearly three years into his four-year term.[49] His government has also promised to erase the criminal record of anybody arrested for cannabis possession.[50] It is now regulated like cigarettes, with guidelines and "health risks" lists pretty transparently designed to "take the fun out of legal weed." [51]

By October 2018, Trudeau laid out a carbon tax plan that would garner around 2 billion dollars in at least the first year, the majority of which will be given to 70% of all Canadian citizens. It's a net progressive tax that will expand the wallets of many tens of millions of people in the country. It wouldn't affect much in terms of worldwide greenhouse gas emissions, but it's a very apt political move since the rebates will be given to voters mere months before the 2019 elections. [52]

Trudeau's response to the COVID-19 pandemic was resolutely more competent than that of Donald Trump, including giving out a basic income of 2000 dollars per month for workers and enforcing lockdown measures far better than his right wing counterpart. The second wave response, while worse, is still far more apt than the POTUS' entire response.

He's basically Canada's Obama; young, charming, and charismatic. But as is standard with Canadian liberals, he mostly prefers to tweak the system rather than transform it fundamentally (with a handful of exceptions, viz. his Senate approach). Much like Blair or Macron, he's a centrist who doesn't like being challenged for his flip-flops and has a thinly-veiled elitism towards voters who aren't that into him.[53] He even booted hecklers from one of his town halls when they criticized his less than stellar record.[54]

In more recent times, Trudeau has a source of embarrassment to Canadians after his utterly terrible trip to India.[55] Voters became much less likely to say he represents Canada positively on the world stage, when in the previous year, over 50% approved of his image on the world stage.[56] However, Canada's own biased and partisan media aren't much better either, and their own coverage of the India trip leaves much to be desired.[57]

Withdrawing from election reform really soured him to many on the left once he realized proportional representation would cut into his supermajority; he wanted preferential voting (à la Single Transferable Vote or the more watered-down Instant Runoff Voting), which would maintain his power. This decision severely hurt his standing from voters who felt he was being two-faced on election reform. Without this fundamental change, and without much other fundamental changes, you can expect the Conservatives to, eventually, gain power back from the Liberals, and we'd be back here yet again, with small changes to big problems. Either Trudeau is forced to grow a spine, or the country will elect Conservative leader Erin O'Toole as Prime Minister by 2023. A downgrade in Liberal standing from majority to minority government in the 2019 federal election, with the NDP now holding the balance of power, foreshadowed this.