The Enfield Poltergeist refers to dodgy goings-on at a house in Enfield near London, England, in the late 1970s where a brood of badly-behaved children managed to convince gullible adults that a poltergeist was responsible for their mischief. It was widely promoted by book-peddling psychic investigators and the British tabloid press. 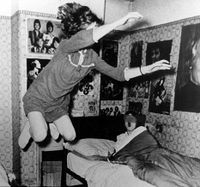 Fooling grownups is such fun!
‬

When four children living in a single-parent household began blaming their destructive antics on a poltergeist, their mother gave in and called the police. Cue the always-looking-for-a-story-that'll-boost-circulation tabloid newspapers and sketchy psychic investigators. Reporters from the Daily Mail flocked to the scene of what promised to be a publicity exploitation bonanza. Society for Psychical Research members like Guy Lyon Playfair and his pal Maurice Grosse spent weeks hanging around the family hoping to get proof of otherworldly phenomena. Even Ed and Lorraine Warren got in on the action.

To say these folks were gullible and credulous is putting it mildly. One time the children instructed investigators to stand facing away from them, then proceeded to pelt them with Lego toys and other objects. The investigators eagerly took their word that a poltergeist had done it.[note 1]

It soon became apparent that the trickster ringleader was 11-year-old Janet, a cheeky, pre-adolescent bundle of energy who could imitate a "demonic voice"[note 2] at the drop of a hat, and excelled at improvising spooky stories the sappy investigators swallowed whole. When she and her sister moved a small metal gas heater away from the wall in their bedroom then called investigators in to show them "what the poltergeist had done", the men excitedly reported "a heavy fireplace ripped from the wall by unseen forces."

Janet and her sister played their credulous audience like virtuosos. They would lock themselves in their bedroom and make weird noises, pretending to be possessed. The girls insisted that visitors could only come into the bedroom if certain conditions were met. As soon as visitors were facing the wall with their eyes covered, slippers and pillows began "miraculously" hitting them.[1]

At one point, the girls agreed to have a still camera timed to snap a picture every few seconds installed in their bedroom. Subsequent photos captured Janet in mid-air, obviously using the bed as a trampoline, but Playfair and Grosse were convinced that a demonic spirit was levitating her. And (foreshadowing modern day TV charlatans like Ghost Hunters) when some piece of equipment like a tape recorder malfunctioned, the investigators were always 100% sure that a supernatural force was to blame for it.

The most embarrassing part of the whole episode is the fact that, more than once, Janet was caught faking actions supposedly by the poltergeist. The investigators argued that just because she faked evidence a few times didn't mean she faked evidence all the time. Which, if you think about it, is the only thing about the affair that actually deserves to be described as "amazing and unexplained". [2][3]

For some reason, the British press go out of their way to treat even the stupidest ghost stories respectfully, and to this day even the venerated BBC goes slightly tabloid when reminiscing about the good old days when tales of spooks and demons could capture national attention.[4]

Operating on the principle that even the most implausible bullshit claims will go unchallenged if driven by a sufficiently energetic marketing campaign, The Conjuring 2: The Enfield Poltergeist is supposedly based on the "true story"… according to Lorraine Warren.[5] It even comes up with an ingenious explanation for the proven fakery on display: the ghosts themselves forced Janet to fake stuff in order to throw off the investigators!