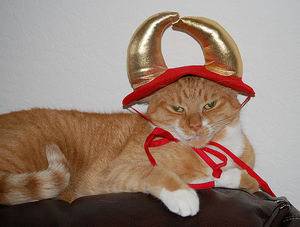 Ed Warren (1926-2006) and Lorraine Warren (1927-2019) were self-styled demonologists and ghost hunters famed for their role in making the already crazy residents of The Amityville Horror house sound even crazier. They enjoyed a decades-long career of enabling, supporting, and exploiting the supernatural fantasies of troubled families struggling with problems like alcoholism, drug addiction, mental illness, and domestic abuse.

The Warrens had been a fixture of the hardcore ghost-busting scene since the late 1950s. Long before TV plumbers were stumbling around in the dark saying, "did you hear that?", the Warrens were poking into houses they thought were haunted and trying to convince people they were infested with ghosts. During their long career, they claimed to have investigated over 10,000 cases of "paranormal activity". That figure is probably accurate since the paranormal activity they investigated consisted entirely of shit they made up.

Throughout the 1950s and 1960s, the Warrens exclusively found "ghosts". But in 1971, William Peter Blatty hit the best seller list with The Exorcist. Abruptly, the Warrens' ghosts suddenly became "demons". Almost overnight, all ghosts were really demons trying to possess the residents of the home.[note 1] In 1977, the Warrens' own breakthrough success arrived with The Amityville Horror. The story: an American family supposedly terrorized by supernatural forces turn to the Warrens and the power of Jesus Christ to help them repel the demonic threat. The Warrens recycled this basic plot formula (occasionally without success)[1] again and again over the years.

In each of the subsequent book and screenplay retellings, much effort was made to portray the Warrens' "clients" as healthy, well-adjusted American families, but this did not reflect actual reality. For example, in Amityville, the Lutz household was fractured by money problems, the intense hatred of a teenaged son for his domineering stepfather, and a disintegrating marriage long before any demons supposedly showed up. And in Connecticut, the Snedeker family was trying to cope with their eldest son's Goth lifestyle that included increasing drug use, vandalism, and sexual misbehavior.[2]

Devout Catholics, the Warrens were strictly Old School. Unlike today's crop of gadget-obsessed ghost hunters, they relied entirely on Lorraine's clairvoyance to "detect" the demons and Ed's prayers to "banish" them.[note 2] For a little extra firepower, the Warrens brought in cooperative priests eager for the chance to kick some demonic ass. Part of the mythology surrounding the Warrens holds that the Catholic Church regularly called them to consult on cases of demonic possession, but it's more likely this was just part of an enthusiastic publicity campaign designed by "America's Top Ghost Busters" to sell books and lecture tickets.[3]

Although the Warrens called themselves demonologists, they were actually skilled packagers of book and movie rights.

In the late 1970s, New York couple George and Kathy Lutz invented a classic horror story over many bottles of wine.[4] The media loved the tale, and the Warrens' kooky demonic embellishments helped make the subsequent book and movie as popular as disco, Rubik's Cube, and the AMC Pacer.

In 1981, an emotionally disturbed Connecticut man murdered his landlord. His attorneys opted for "the Devil made me do it" defense and drafted the Warrens to testify that he was indeed possessed by Satan. The jury was not impressed and the man was convicted, but the Warrens agreed to share the profits of a book and movie with the man's family.[5]

No you didn't read wrong. The Warrens claim to have exorcised a "werewolf demon" in 1983. They wrote a book but failed to sell the movie rights,[6] probably because the movies are presented as being real stories and the public wouldn't buy into an obviously fictional supernatural being, as opposed to a 'realistic' one like a demon.

In 1986, Pennsylvania couple Jack and Janet Smurl tried to hop on board the Amityville gravy train with their own horror story of demons and spooks harassing their household. They went the Lutz's one better and claimed the demon was having sex with them. Unfortunately, even with the Warrens on hand to swear it was all true, they failed to hit the jackpot with a book and only ended up with shares in a crappy TV movie.[7]

In 2013 Hollywood decided to tap into the tired old Warren formula for a new horror film, The Conjuring. A couple's home is supposedly a hellhole of demons and ghosts, but the Warrens show up, there's the inevitable exorcism, and then everything is OK. But not before an avalanche of special effects and gratuitous blood vomiting scenes. Filmmaker brothers Chad and Carey Hayes have expressed hope that this horror film can "lead people to God."[9]

The Warrens cooked up a story about a haunted doll named Annabelle sometime in the early 1970s, which was featured as a minor character in The Conjuring. In 2014, a trashy, mass-market spinoff was released based on the doll resulting in heaps of free publicity for their "Occult Museum".[10]

After the rave reviews of the first movie, it was only natural that it got a proper sequel. The movie follows the Warrens' "investigation" of the Enfield Poltergeist, an alleged haunting of two young girls from 1977 to 1979 in the London borough of Enfield. Skeptics of the claims are convinced that the girls were faking the haunting, and one of the girls admitted to faking "some, but not all" of the paranormal activity.[11] Not only does the movie play up a demonic presence in the case, it also revisits the claim that the Amityville murders were orchestrated by a demon, AND also portrays the skeptic and scientific community as closed-minded fools.

Like Annabelle, this is a trashy, mass-market spinoff of The Conjuring 2 focusing on primary antagonist Valak, "the Marquis of Snakes," who takes the form of an evil nun.[12] Said demon is mentioned in multiple Renaissance-era grimoires, but bears no resemblance to his movie portrayal.