Ghost Hunters is a comedy paranormal TV show featuring the exploits of a group of slow-witted pesky plumbers paranormal investigators as they misuse a bunch of consumer electronics from their local Circuit City Best Buy in an effort to find "evidence" of paranormal activity. The core team is composed of members of The Atlantic Paranormal Society (TAPS). When not appearing in episodes of this series, the crew enjoy posing for photos for the Ghost Hunters website, in which they aim to appear thoughtful, skeptical, or mysterious, but in most cases the overall impression is one of puzzlement and constipation.

To the skeptic, the only reasons to watch are to play the "lowest IQ in this segment" competition, and that some of the team are reasonably attractive in a confused kind of way.

Perhaps the best example of the way the show thinks science works was provided when they heavily emphasized and raved about how one of the images they captured "has NO EXPLANATION whatsoever (and therefore must be a ghost)!"

An episode in a nutshell[edit]

The typical American segment consists of a situation in which someone is under the impression that they're witnessing paranormal activity. They call Ghostbusters TAPS, whose principals quickly slide down the fire pole remove their arms from the s-bends of whatever toilets they were unplugging in order to rush to investigate the alleged haunting.

The investigators then strap on their proton packs pile up a bunch of random electronic hardware in their vans and go blow the crap out of some ghosts interview the deluded people who are convinced that they see dead people and are desperate to have their superstitious ideas confirmed by fully qualified plumbers.

These plumbers then proceed to make the Nixon White House variety look brilliant, as they generally set up gear to record whatever noise, wow, and flutter they can. Cameras are set up in the dark and sound recorders in silent rooms. They let the equipment run unattended for a few hours while wandering around misusing other equipment, such as the magical "EMF detector," which is absolutely not a simple instrument used in zoning and to help isolate lab equipment. Really! It's a GHOST HUNTING TOOL!

They then go home to some dump in Rhode Island,[1] pore over the blank tapes, and get really excited about what white noise sounds and looks like when the gain is turned up all the way.

The last step is to return to the scene of the slime and tell the morons, in most cases, that there really is something going on there!!! Once in a while, they act "skeptical" and say there might be a haunting but that they didn't find strong evidence for it. They also occasionally unclog the mark's haunting victim's toilet — evidently for free!

Pretend skepticism and other ploys[edit]

While watching Ghost Hunters or similar paranormal TV shows, it's helpful to think of the participants as talented actors con artists.[note 1] The shows have the same premise as classic con games: you're promised one thing, but you get another such as promising to show you ghosts but giving you a bunch of adults stumbling around in a darkened room screaming like frightened children ("EEEEEE! WHAT WAS THAT?!!!"). Or "sincere" testimony that something really paranormal happened just out of camera range ("Gosh Darn it! How unfortunate!"). Or grainy video of some household object being pulled by fishing line moving by itself. ("Hey! We caught some evidence!") 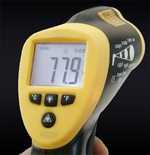 Temperature change means it's paranormal (only on TV!)

The Ghost Hunters team is kind enough to provide Steve's list of equipment for budding paranormal investigators.[4] If you follow the references and read the Ghost Hunters descriptions of these devices, you'll notice a distinct lack of evidence. Claims for the effectiveness of a device will typically be backed by claims beginning with the phrase "many paranormal investigators believe…". As you review the list, consider playing a drinking game. Take a shot each time you see the words "many think" or "some believe" used to support the efficacy of a device.

At the time of writing, the list is as follows:

A digital recorder, such as a portable device for recording voice memos, is perfect for observing electronic voice phenomena (EVP). Steve has the following to say about the digital recorder (our emphasis to highlight vagueness, uncertainty, and anecdotal evidence):

"It's the contention of many paranormal experts, and my own personal experience, that voices from the other side can manifest as EVP (Electronic Voice Phenomena). EVPs are generally inaudible to the human ear, but can sometimes be picked up on electronic recording devices. At TAPS, we use digital and analog recorders to attempt to capture EVPs."[5]

It's also the contention of many paranormal experts that underpants are best worn on the outside, or on the head. As is the case with EVP, we await evidence in support of the outside-underpants contention. The practice of using a digital recorder to capture EVP is the modern version of leaving a cassette recorder running in a darkened room and then turning up the volume on playback to try to make sense of static and naturally occurring background noise.

Based on the progression from analog tape to digital recorders, one can only assume that ghosts in the future will learn to encode their wails as MP3s, conveniently emailing them directly to paranormal investigators.

This device is a lot of fun, particularly if one lacks sufficient knowledge to understand the origin of EMF (hint: it's usually electricity). There are many different sources of electromagnetic radiation, and it's pure guess-work that ghosts have some kind of EMF signature, unless ghosts are actually made of electricity. EMF activity is likely to always be detected to some extent, barring measurements conducted for people who live in Faraday cages or measurements taken 10 miles from the nearest power line. A good analogy would be to compare an EMF detector to an AM radio receiver. The radio will still pick up background noise, even if it's not tuned to a frequency being used for broadcasting. One could cite this static as proof of the existence of ghosts, and that's pretty much what the Ghost Hunters are doing, albeit in a more expensive and complicated way. EMF meters are actually used quite frequently by your friendly local power company to ensure that buildings are kept a suitable distance away from power lines and also in laboratory situations to keep certain equipment from frying everything else. Benjamin Radford of the Committee for Skeptical Inquiry, on Ghost Hunters' nonsensical usage of measuring devices, commented "Just as using a calculator doesn't make you a mathematician, using a scientific instrument doesn't make you a scientist."[6]

Steve's explanation of this device is particularly telling (our emphasis):

"If you're a serious paranormal investigator, the mini-digital video camera is an indispensable part of your arsenal. Not only will it provide a visual and audio record of your investigation, it will give you unrestricted access to locations and allow you to see your own reactions to paranormal activity, when it occurs, in real time."[7]

The emphasized text shows the most important use for such cameras: to get spooky-looking footage. The ideal approach is to stand in a creepy room, point the camera at your face, and babble incoherently about how eerie things feel. For added effect, avoid editing out footage containing rapid camera angle changes. These jerky shots enhance the feeling of trepidation. The only drawback to this type of camera is that pictures of the investigators and their clients don't look freaky enough. What could be done to enhance the "otherworldly" feeling? This technique is basically lifted wholesale from the (fictional!) 1999 movie The Blair Witch Project.

Hooray, this[8] is exactly what we need! A night vision camera will complement the mini-digital video camera by providing the Paris Hilton sex-tape look so highly prized by paranormal investigators.[note 2] It's far easier to convey a sense of fear when people are dimly lit and green.

This technology can identify cold spots in a house that can be attributed to a ghostly visitation or a poorly insulated window-frame. Like the near-infrared night vision camera, it can operate in total darkness.

Paranormal investigation is best conducted in a dark and creepy location. A cynic might suggest that the rationale here is to afford the investigators and their clients' subjects more freedom to confabulate ghosts out of shadows and noises from the darkness. That may be unfair, since many theorists could claim that ghosts won't appear unless the scene is suitably creepy — in the same way that psychotic voices prefer to appear in the heads of the mentally ill.

Steve says that this is no longer used by TAPS, indicating that their credulity has some limits. A skeptic may suggest that their main reason for retiring this device is because white noise

is very irritating to listen to. According to "some" theorists, these devices can generate noise that is subsequently manipulated by ghosts in order to communicate with the living. This could be like modulating a carrier wave, except that there is actually evidence that carrier waves can be modulated.

They used one to see if it would register any "anomalous readings". But no anomalies + no impressive blinky lights + irritating ticking noise = retirement after one episode.

An instrument normally used to measure ground movement. Lots of blinky lights (good!)[9] that flash to the vibrations of camera crew ghost footsteps across a floor.

They called it an "ion generator" because that sounds more "sciencey" and promotes the idea that negative ions somehow "help the spirits manifest."