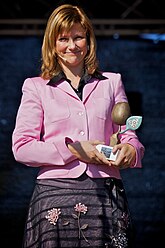 Princess Märtha Louise of Norway (1971-) is the daughter of the current king and queen of Norway. Fourth in the line to the throne, she is fortunately unlikely to ever inherit the kingdom.[1] As an avid proponent of holistic medicine and all things woo, she believes she can communicate with both animals and personal fairies angels.

She is among the world's most famous proponents of angel therapy, and has established her own 'angel school'[2] where students are taught, for a nice price, how to get in touch with their own angels. She has also worked with Lisa Williams, communicating with the dead.[3]

Unlike Snåsamannen, another notable Norwegian woo-meister, she has received much criticism and ridicule nationally - and some interest internationally. The most notable critic is perhaps the state church,[4] as it does not condone belief in spiritualism or the paranormal. Many critics also claim she uses her inherited fame, her royal title, to make a quick buck, even though she doesn't really make that much money from the business.[5]

Her Royal Highness attracted international curiosity after she announced she was seeing the California-born "Shaman" Durek, the American spiritual counselor to Hollywood's "shove rocks in your vagina" princess, Gwyneth Paltrow.[6]

This parapsychology-related article is a stub.
You can help RationalWiki by expanding it.
Retrieved from "https://rationalwiki.org/w/index.php?title=Princess_Märtha_Louise&oldid=2445060"
Categories:
Hidden categories: