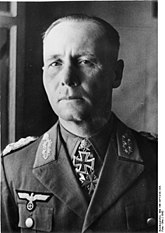 Erwin Johannes Eugen Rommel (5 November 1891 – 14 October 1944), nicknamed the "Desert Fox," was one of the more interesting Nazis – maybe sorta kinda. A German Field Marshal in World War II, he commanded Panzer divisions in the North African Campaign (the Afrika Korps), along with the defense of the Atlantic wall. He managed to become well-respected by his adversaries,[note 1] for reasons explained below.

Early records showed that Rommel had a close working relationship with Adolf Hitler, but he eventually reached the same conclusion that the rest of the world had. On some occasions[citation needed] he refused orders to engage in war crimes;[citation needed] ironically, Hitler couldn't touch Rommel himself because he was responsible for turning the general into a Chuck Norris-esque meme in Nazi propaganda.[1] Rommel also held negative opinions toward his Italian allies, and his rebellious nature left him with many critics in the German military.[citation needed]

In 2011 there was considerable controversy over a German biopic that portrayed him as... just a usual Nazi. David Irving enjoyed it.[2][note 2]

The Nuremberg Trials revealed that Rommel was complicit in the attempt to assassinate Hitler in the July 20 plot (although Rommel seemed to have favored arresting him instead). He could choose to be put on trial and have both him and his family killed or commit suicide to allow his family to survive. He picked the latter. His committing suicide was preferable for the regime, as they could hush it up easier than a high-ranking general whom the Nazis themselves had made into a myth turning against Hitler and getting sentenced to death.[citation needed]

For the members of the 10th Panzer Division whom Rommel commanded and the Field Marshal, the West German "Bundeswehr" named an armored unit 10 "Panzerdivision." Another Bundeswehr Panzerdivision, the 1st Panzer Division, also shared a designation with a Wehrmacht equivalent.[3] The army group's headquarters was at Graf Stauffenberg Kaserne (Count Stauffenberg Barracks), referencing the July 20 plot to kill Hitler.[note 3]

There are also three army bases named after Rommel. This fact, like many of the lines of unbroken tradition between the Wehrmacht and the Bundeswehr, is, of course, controversial among the German left and people with more than a passing knowledge of German history.[4]

His only son, Manfred

, was the post-war mayor of Stuttgart, Baden-Württemberg for over 20 years (as a member of the CDU) and was an advocate of minorities' civil rights.[5] The fact that Rommel Jr. was moderately competent as a mayor and that Stuttgart is a prosperous multicultural city with a low crime rate, even by the crime standards of Germany, and other problems may have helped preserve Rommel Sr.'s positive reputation after the war when more Germans questioned whether a "good Nazi" ever existed, as can be seen by the re-evaluation of figures like Wernher von Braun[note 4] or Albert Speer.[note 5] Rommel personally prevented his kid from joining the SS.[citation needed]