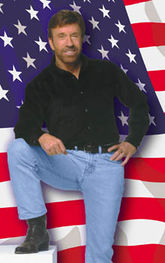 Carlos disobeying the laws of the Flag Police.

Stop the presses! Chuck Norris is running for President… of Texas.

The adventures of the brain-dead[edit]

Through his columns, Norris has been an outspoken critic of the theory of evolution, the teaching of which he holds makes him act like a monkey (this in spite of the fact that he has access to mirrors). He has also worked to uncover a vast atheist conspiracy to outlaw Christianity in the United States, the first step of which is the acceptance of atheists in our government:[2]

Though the majority of Americans continue to claim to be Christians, a Gallup poll discovered 45 percent of us would support an atheist for president. Such a survey is a clear indication that the secularization of society is alive and well.

To thwart this menace of secularization, Norris has menacingly promised that if elected President (as if) he would "tattoo an American flag on the forehead of every atheist," an obvious form of flag desecration (see photo).

Norris is active in many fundamentalist causes, including the Billy Graham Evangelistic Association. He and his wife are the spokespersons for the National Council on Bible Curriculum, which seeks to bring state-certified Bible courses to public high schools nationwide. Godspeed![3]

And just to show that all forms of lunacy tend to converge, he's also an anti-vaxxer[4] and an opponent of genetically modified food.[5] And for a Christian fundamentalist, he sure has no problem defending the authoritarian leader of Azerbaijan slaughtering Armenian Christians in 2020.[6]

Obligatory flogging of a dead meme[edit] 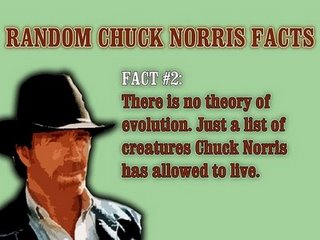 Chuck Norris is the great mutator.

As pretty much everyone with an internet connection in the mid-2000s knows the "Chuck Norris Facts", here are a few of the lesser known ones.[7]

Norris has recently revealed a plan, orchestrated by none other then Barack Obama himself! The plan involves rapidly taking in more immigrants as fresh voters for the Democrats. It's such a brilliant scheme. And here Norris describing the plan in his own words.

Third, to add insult to injury, the White House Task Force on New Americans just announced in April its "federal strategic action plan immigrant and refugee integration." They call it: "Strengthening Communities by Welcoming All Residents." Their strategy is to "seed your communities" with at least 70,000 refugees a year, including Iraqis, Burmese, Bhutanese, Somalis, Cubans, Syrians and others. And the numbers of Syrians, mostly Muslim, will surpass them all.

First, the Department of Homeland Security, or DHS, sent letters to all 9,000,000 green-card holders urging them to naturalize prior to the 2016 election. PJ Media reported how it "obtained an internal 'Dear Colleague' letter written by Leon Rodriguez, the ‘director and co-chair of the Task Force on New Americans.’ The letter refers to a White House report called 'Strengthening Communities by Welcoming All Residents.'"

PJM added: "Leon Rodriguez has a tainted history – not only was he a central player in the radicalization of Eric Holder's Civil Rights Division, he also 'undertook a purportedly illegal search' of a government employee's computer in Montgomery County, Maryland. (Messy details are at the Washington Post.)"[8]

Unsurprisingly, Chuck also believes in global geo-engineering by use of chemtrails.[9]

In 2017, Norris sued medical device manufacturers, claiming that his wife was poisoned by the injected gadolinium compound used in MRI scans to increase contrast.[10] Contrary to Norris' claim, gadolinium-based contrast agents have been used in more than 300 million people worldwide and both the FDA and a European Union agency have found no evidence that retained gadolinium was harmful.[10] The lawsuit apparently did not cite any medical evidence.[10]