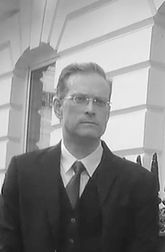 Gregory R. Johnson[2] (1971–) (pseudonyms: The Cat Lady, Dr. R. G. Fowler, T. C. Lynch, Trevor Lynch, Mike Meehan[1][3]) is an American white nationalist notable for his support of holocaust denier and "esoteric Hitlerist" Savitri Devi. Johnson runs The Savitri Devi Archive under the pseudonym "Dr. R.G. Fowler".[4] He also runs the Neo-Nazi website Counter-Currents under his own name.[5] About his youth, Johnson stated, "I was a bit of a boy Objectivist, a bit of an asshole, for a couple of years because of that [watching Milton Friedman's Free to Choose program on PBS]." and "somewhat pro-Zionist".[6] He's no longer a libertarian and he's now anti-semitic,[7] but he's become 100% asshole. He received a Ph.D. in philosophy from The Catholic University of America in 2001 ("A commentary on Kant's Dreams of a spirit-seer").[2][8] He taught at colleges for a few years, specializing in Swedenborgian Studies, (Morehouse College, Spelman College, Georgia State University, Pacific School of Religion) before leaving academia permanently.[7]:205,209

Johnson was arrested in 2019 in Norway under the country’s immigration act. Norway's intelligence service told CNN that he was arrested because they considered him "to be a threat, not because of what he could do but because of his hate speech and his previously expressed support for Anders Breivik."[9] Following his arrest, the Center for Swedenborgian Studies at the Pacific School of Religion issued a statement that they were unaware of of his extremist views during his term of employment (2002-2005) and that the Center condemned his views in no uncertain terms.[10]

book, The Crisis of the Modern World.[11] The specific principles are pseudohistorical, specifically cyclical theory and the idea that there was a golden age:[11]

Johnson's training is strictly speaking in philosophy, not history, although he has claimed legitimately to have expertise in the history of philosophy.[2] This is a case of Ultracrepidarianism.

The idea of living according to "Golden Age principles in the depths of the Dark Age", is reminiscent of Ignatius Reilly, the protagonist of Confederacy of Dunces[12] that is even more pronounced in the neoreactionary movement.

The Counter-Currents was banned from Paypal and Patreon following the aftermath of Unite the Right, and it was also banned from the Amazon Affiliates Program.[1]

Johnson is a promoter in the crank white genocide conspiracy theory.[13][14] Although Johnson has eschewed overt calls for violence, such as from William Pierce's The Turner Diaries (a.k.a. "Day of the Rope"),[7]:211[note 1] Nonetheless, Johnson has advocates "a well-planned, orderly, and humane process of ethnic cleansing."[16] This is duplicitous on the part of Johnson, who is effectively advocating violence by this statement because people do not willingly accede to being ethnically cleansed from their natal homelands and give up their citizenship. The United Nations defines ethnic cleansing as, "a purposeful policy designed by one ethnic or religious group to remove by violent and terror-inspiring means the civilian population of another ethnic or religious group from certain geographic areas."[17]:33

Hegemony of the white races[edit]

Johnson is a fan of the Italian fascist philosopher and rape promoter Julius Evola.[18] He approvingly republished Evola's article "The Hegemony of the White Races". Evola wrote in this article that:[19]

Johnson also believes that people who discuss past crimes against humanity committed by white people should be punished, essentially advocating for a memory hole:[20]

See the main article on this topic: Bait-and-switch

Johnson has engaged in bait-and-switch tactics by hiding his most odious views with pseudonyms. For example in 2003 under the pseudonym T.C. Lynch, he expressed support for ethnic cleansing of Jews on racist and anti-semitic website Vanguard News Network:

In an article with the same title ("To Cleanse America: Some Practical Proposals") by Johnson published on Counter-Currents in 2010, that paragraph was excised; there was no acknowledgement of the previous publication.[22]