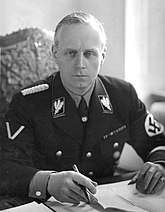 Joachim von Ribbentrop (1893—1946) was Nazi Germany's Foreign Minister. Despite being an international and successful business man, Ribbentrop was the special mixture of pompous and stupid that no one liked. He was regarded as unintelligent by both his Nazi peers and by others outside Germany, despite having an IQ of 129.[1].

Ribbentrop is a perfect example of how thunderously incompetent people can rise to power in a dictatorship by doing nothing, being a yes-man, and looking important.

Ribbentrop got his start as an ambassador to the United Kingdom, where he more or less did nothing but piss off the British and hit the King in the head while yelling "Heil Hitler" and doing the Nazi salute.[2] He tried to get England to give Germany back its African colonies, but the British laughed in his face and Hitler ignored him because he was more focused on trying to kill the people who lived east of him. Also, Hitler had given up on colonies by the mid 1920s as evidenced by his "second book". Ribbentrop failed miserably at Hitler's goal of creating an English-German alliance and ironically created a German-Soviet alliance, something that pissed Hitler off.

His claim to fame was the creation and signing of the Ribbentrop-Molotov pact, which promoted peace between the USSR and Nazi Germany, at the expense of the Polish. After this, he didn't really do much other than help Hitler kill a lot of people. He was hanged in 1946 after having been convicted of being a major war criminal at the Nuremberg Trials, in part for inducing leaders of nominally-independent satellite states to turn their surviving Jews to Nazi Germany for extermination.

His diplomatic style was said to be "a mix of bullying bluster and icy coldness coupled with lengthy monologues praising Hitler."[3] This style was said to alienate many, with then-Under Secretary of State Sumner Welles stating that Ribbentrop had a "completely closed and very stupid mind."[4]

Ribbentrop's successes in pre-war Europe were mostly due to the fact that England, France, and the USSR were focused more on appeasing Germany rather than any skill or competence he had as a negotiator. Unsurprisingly, his racism made it hard for him to win allies in some places like Turkey, where he thought that the Turks were naturally inferior and that only by shouting at them could he get them to understand what he was saying. Turkey responded by lifting both middle fingers up at him and then allied with England.

He also pissed off the Japanese and the Italians, Nazi Germany's major allies.

The crazy leading the incompetent[edit]

Some argue that while Ribbentrop was laughably incompetent, he didn't have much to work with in terms of foreign policy as Nazi Germany's foreign policy was more or less based on how Adolf Hitler felt at the moment.

The "von" in his name has no historical basis, as he didn't have any aristocratic ancestry. He put it there to make himself sound important, even if few Nazis had the nobiliary particle in their names. He got it by arranging an adoption by an aunt with the particle "von" in her name.

He was the only person with the particle "von" convicted at the Nuremberg trials and sentenced to death.