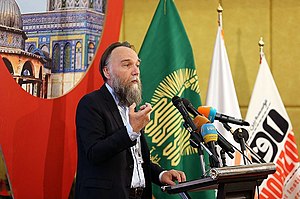 Aleksandr Gelyevich Dugin (1962–) is a Russian neo-fascist, who claims to have created a "fourth political theory" beyond capitalism, communism, and fascism, combining the best elements of all three. Most people in the civilized world (well… except for a few) deem him as a hatemonger and Nazi-Stalinist who rhetorically promotes expansionist wars for reclaiming MOTHER RUSSIA FORMER GLORY without ever having gone to any actual wars himself, despite being (or, much more likely just claiming to be) one of Vladimir Putin's pet ideologues.[1] The Nazi-Stalinist part is actually true: his stated political position is National Bolshevism, which is pretty much the ultimate demonstration of horseshoe theory in action.

His most significant accomplishments are:

This conspiracy theorists-related article is a stub.
You can help RationalWiki by expanding it.
Retrieved from "https://rationalwiki.org/w/index.php?title=Aleksandr_Dugin&oldid=2247318"
Categories:
Hidden categories: