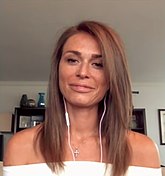 Although Goldy has rejected being labelled as alt-right,[2] her talking points mirror those of the alt-right (e.g. "Diversity" is politically correct code for non-white[3]). Other examples include her scaremongering about people being "replaced" by foreigners,[4] calling people "beta cucks" and "globalists",[5] complaining about "degeneracy",[6] opposing "Cultural Marxism",[7] and accusing every organisation she doesn't like of being "Soros funded".[8] She has also pandered to the alt-right with not-so-subtle videos such as "White Genocide in Canada?"[9][10] and "CBC celebrates white genocide".[11] In August 2017, she was fired from The Rebel Media after she went on a podcast affiliated with The Daily Stormer.[12]

Goldy believes in the "soy boy" pseudoscience and claims that "Soy is giving you b*ch tits & Leftism. This isn't a meme, it's literally destroying us from within".[13]

See the main article on this topic: Fourteen Words

In a livestream with alt-righter Colin Robertson (better known as Millennial Woes), she made multiple references to the white nationalist fourteen words:

...and that I want to secure an existence for my children and a future for my family...[14]

We want to secure a future for ourselves and for our children.[15]

She then obliged when asked to explicitly state the fourteen words:

Goldy: Are you trying to get me to say the fourteen words, chat? Is that what this is? OK, he wants me to say--
Robertson: No. It's that-- No, I don't want you, it's just that the chat were asking you to so I thought "well, should I propose that or not?"
Goldy: OK, all right. Do you want me to do it?
Robertson: Sure.
Goldy: We must secure the existence of our people and a future for white children.
Robertson: Yeah! [laughs]
Goldy: Is that controversial though? Like, I don't see that that's controversial. Is that bad? Like, I think it's controversial to say the opposite. Like, I think it's controversial to say, like, "we must not secure our future and we must not secure the existence." Like, what? Like, that's the whole thing is that once you just think about this, like, very simply and logically you realise that it's not like "ha ha, rah rah" but these aren't sophisticated ideas at their most, like, basest point. Like, we want to survive.[16]

Goldy was born in June 1989 to Michael Bazos, a Toronto-area family doctor whose parents both immigrated to Canada from Greece, and Julia Goldy, a housewife whose mother and father parents immigrated from Greece and Ukraine, respectively. Goldy and her younger sister, Alexandra, were educated at Havergal College, a private all-girls school. Goldy is on record as claiming her father was abusive, but has remained on friendly terms with him. Goldy's mother, Julia, came down with cancer and died when Goldy was in her early 20s; Goldy has repeatedly said that she used a non-medicinal oil to drive her mother's cancer into remission.[citation needed]

In December 2018, Goldy married her long-time partner, Josef Viezner, in a Catholic ceremony in Prague. In June 2020, Goldy gave birth to her first child, Roman.[citation needed]

Retirement and move to Florida[edit]

In 2020, Goldy and her husband moved to Florida, where his father purchased a beachside condominium for them.[citation needed]

In mid-January 2021, having actively joined calls for a violent insurrection to overturn the 2020 US presidential election result, Goldy abruptly deleted all her social media history and ceased to post new commentary. In June 2021 she moved her empty Twitter account to "private" status. Both developments are likely intended to mask her political extremism and ties to political violence as she applies for US residency.[citation needed]