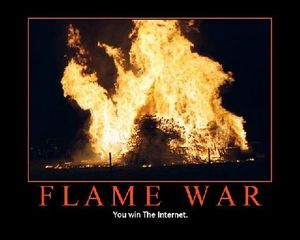 A flame war consuming an entire portion of the internet.

A flame war is the internet term for a war of words exchanged in an online venue (usually a blog, forum, or wiki, although flame wars can happen anywhere people can post their comments) that defies most of the rules of civilized society. As more and more people "join" the internet, the amount of potential flame wars seems to erupt exponentially.

Triggers for a flame war[edit]

A flame war can be explained in much the same way as a fire can be explained. First, a fire needs a source to burn, in the case of the internet, a controversial issue such as politics, religion, or even a YouTube video. Once the fire has a source, it needs something to catalyze the reaction with, usually oxygen. The "oxygen" in a flame war consists of two (or more!) people taking sides on the issue. Finally, once the fuel and catalyst are in place, all that is needed is heat to start the reaction, in this case, is a willing user posting a comment found offensive by the "other" side.

Spread of a flame war[edit]

Conditions on most messaging locations are ideal for a flame war to start and spread. On most forums, whenever a person makes a post, that post slides to the top of the board, which allows bystanders to enter the war of words and place in their own input, placing the message, again, at the top of the page. On wikis, any edit shows up on the recent changes, meaning any person watching the recent changes can see a flame war occurring, and feel obligated to join in. If a flame war goes unextinguished for a period of time, there is almost no limit to how many users can be engaged in the battle, which could lead to the war spreading to other pages, such as a combatant's user page, blogs, or Facebook pages. At this time, the flame war has become a forest fire.