Felix Arvid Ulf Kjellberg (1989–), known by his stage name PewDiePie, is a Swedish internet entertainer who makes video content for the online streaming service YouTube. He makes millions of dollars a year from his entertainment business and is estimated to have a net worth of US$20 million.[1] His YouTube channel first became the most-subscribed channel[note 1] in August 2013, with 11 million subscribers, and has been overtaken several times, most notably by the Indian company T-Series in early 2019.

Outside the YouTube community, he is generally best-known for becoming a human meme,[citation NOT needed] having his supporters hack printers, and paying two Indians to hold up a sign saying "DEATH TO ALL JEWS".[2] Aside from the latter incident, Kjellberg is also infamous for some other slip-ups of a similar nature, as well as his interactions with prominent members of the alt-right.

Is Kjellberg actually racist and/or antisemitic? Possibly, but it's also possible that he tends to trivialize such issues, partly because of his perspective (i.e., that of a white male Swedish millionaire residing in southeast England). That said, he certainly did follow a lot of racists and antisemites on Twitter.[3]

Fiverr and the Wall Street Journal[edit]

In 2017, the Wall Street Journal found that some of PewDiePie's videos contained Nazi references.[4]

The banner in question was held up by two Indian boys, who were paid five dollars through Fiverr

for their efforts. The stated purpose of PewDiePie's video was to test the limits of Fiverr.[6]

The boys then said "SUBSCRIBE TO KEEMSTAR". For many of PewDiePie's viewers, this helped further contextualize this as a joke. For the media, the banner itself was much more important. 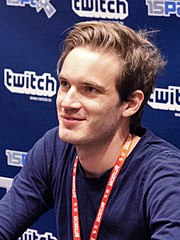 The little twerp in the flesh in 2015

PewDiePie lost a lucrative joint venture with Disney's Maker Studios after this controversy, and YouTube canceled the second season of his YouTube Red series. In a 2019 review, The Verge links the incident directly to the "adpocalypse", the gradual and systemic decrease in ad revenue received by YouTube creators.[7]

PewDiePie milked the controversy to increase views and watch time posted a series of related videos after the initial incident (on 17 January, 22 January, 13 February, 16 February (deleted), 22 February and 24 February). He doesn't initially apologize for any of the incidents, noting in the first video, "it might be just my crude sense of humour, but I think there's something funny about [the sign], and I don't think there's any actual antisemitic thing about it". He also criticizes the media for using parts of his videos out of context and asserts that this constitutes clickbait. The second video (mentioned briefly in the quoted Guardian article) mainly concerns the consequences for the people he paid through Fiverr. The third and fifth videos are more light-hearted videos which are in response to three people in particular.

It finally came to his attention on 12 February that he might be "giving credibility to the anti-Semitic movement", and clarified on his Tumblr blog that he did not support any hate groups. In the deleted video, he eventually apologizes for the Fiverr incident but devotes most of the video to criticizing the media's coverage of him and other YouTubers.[8] Somewhat predictably, the media didn't cover this positively. The last two videos are about the responses to the apology video.

Other YouTube personalities backed PewDiePie in the course of events, arguing that the media had mislabeled Kjellberg as a Nazi and/or antisemite.[9][10][11]

Later in 2017 on a live stream, in a heated gaming moment he called someone "a fucking nigger."[12]

Nothing happened as a result of that one. Also, Kjellberg often used disparate jokes about Asians and autistic people.

In a video uploaded to YouTube on 9 December 2018, PewDiePie accidentally gave a shout-out to some other YouTubers, among them a channel featuring some fairly overt racism and other assorted offensive stuff. Ostensibly, Kjellberg liked their Death Note video essay and didn't notice all of the objectionable content, even though some of it was in the exact video that he mentioned.[14][15] PewDiePie then updated his own video to remove the reference and made another video to address the situation and the Vox article but not before the other channel gained tens of thousands of new subscribers.

The ADL Donation That Never Was[edit]

On September 10th, 2019, PewDiePie announced[16] that he would be donating $50,000 to the Anti-Defamation League in an attempt to make amends for having been invoked by the Christchurch shooter. Naturally, his fans were incredibly supportive of the move -- by which we mean that several of them claimed he was being blackmailed by (((THEM)))[17] into donating. Two days layer, PDP announced he would no longer be giving the ADL the $50,000[18]...and announced while wearing clothing with a symbol that looked a lot like an Iron Cross.[19]

In mid-2018, it appeared that PewDiePie's reign as the most popular YouTuber was close to ending, as the Indian entertainment company T-Series was gaining subscribers at a much faster rate.[20][21] This has been attributed to an increase in the number of Indians with internet access.

In response to this being noticed, PewDiePie vs. T-Series

and "Subscribe to PewDiePie" became a sort of organized campaign, with many YouTubers and other PewDiePie fans showing their support for him in public and on the internet. Some of them asked random strangers to subscribe. Some of them made signs and bought advertising billboards. And some of them hacked thousands of TVs and printers.[22][23] PewDiePie himself later got somewhat fed up with the campaign and issued a statement saying "DON'T Subscribe to Pewdiepie".[24] The campaign has been remarkably effective, with T-Series's takeover being averted for several months.

Despite Kjellberg's prior history of doing just a little too much racist dog-whistling, many supporters were keen to view him as an individualistic

symbol of the "old YouTube",[25] where individual creators like Kjellberg (as opposed to companies like T-Series) could succeed with nothing more than the YouTube algorithm and their fans. The campaign was perhaps more symbolic than practically useful, as Kjellberg's YouTube channel had made him a millionaire years before the campaign began.[26][27]

On 15 March 2019, a self-described "Ethno-nationalist, Eco-fascist" far-right gunman shot 50 people dead and injured many others in terrorist attacks on two mosques in Christchurch, New Zealand. At the start of the gunman's live stream, which continued to be broadcast through the attacks, the gunman said, "remember lads, subscribe to PewDiePie".[28] It is likely that just like the other "memes" found in the shooter's mad ravings, the shooter added in a popular Youtuber's name so that the media would spread the story, leading to his hateful ideas being spread further on the back of click-baiting articles and videos. PewDiePie later expressed condolences on his Twitter account and expressed being "sickened" that the shooter mentioned him. On April 28, PewDiePie decided to end the "Subscribe to PewDiePie" meme, citing the shooting as the main reason.[29]

The gunman's manifesto and live stream also contained references to various other memes, including the Navy SEAL copypasta. Arguably, Kjellberg unduly received attention because of his previous slip-ups. On the other hand, PewDiePie and much of his fanbase have reacted quite defensively to his racism-related incidents. Pewdiepie has openly mingled with figures like Ben Shapiro in his YouTube videos[30] and followed several reactionary and far-right characters (including Lauren Southern, Stefan Molyneux, JonTron and Markus Persson

[31][note 2]) on Twitter. Arguably, Kjellberg is not entirely blameless, as he has been careless with his enormously wide platform and (implicitly) allowed his young, impressionable fans to be more easily radicalized. Not to mention his "fake news media" thing[32] after the Wall Street Journal published the initial report on his Nazi stuff, which would have been convenient for certain people.[note 3]

Account", and unfollowed everyone to only follow @BTS_twt.[33] While Kjellberg did not explicitly connect this to anything in particular (besides his apparent interest in BTS), the accounts he had been following might be indicative of a desire to hide that information.[31][note 4]

Six weeks later, a shooter opened fire inside a synagogue in Poway, San Diego County, California, killing one person, an elderly Jewish woman named Lori Gilbert Kaye, and injuring three others such as Rabbi Yisroel Goldstein and a young Israeli girl named Noya Dahan. The perpetrator, a 19-year-old California State University San Marcos student from the Rancho Penasquitos suburb of San Diego, California, named John T. Earnest wrote an anti-Semitic and racist open letter on 8chan similar to the Christchurch shooter's manifesto. The open letter specifically states "Every Jew is responsible for the meticulous genocide of the European race" and for other ills. The open letter cites the Christchurch, New Zealand, Al Noor Mosque and Linwood Islamic Centre shooter Brenton Harrison Tarrant and the Pittsburgh, Pennsylvania, Tree of Life synagogue shooter Robert Bowers including Nazi German leader Adolf Hitler, Jesus Christ, Apostle Paul, Martin Luther and Ludwig von Beethoven as inspirations for the attack. The open letter revealed that the shooter/author was responsible for committing arson against a mosque in Escondido, California, earlier in March 2019 before the shooting in Poway as he made it clear, "I scorched a mosque in Escondido with gasoline after Brenton Tarrant's sacrifice and they never found shit on me".[34][35]

However, Heavy.com notes that "the reference appears to be an effort to troll the media";[35] Kjellberg probably didn't actually "plan and fund this whole operation". Kjellberg has not publicly commented on the shooting.