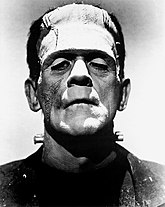 Frankenstein, or the Modern Prometheus is an 1818 Gothic horror and science fiction novel by Mary Shelley (a.k.a. Mary Wollstonecraft). A key work of literary Romanticism, it features one of the first and best known mad scientists in literature, and is often alluded to as a frequent source of anti-science and "who should play God?" tropes. 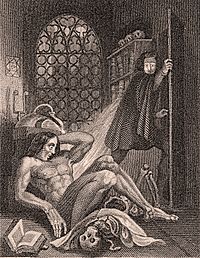 It's hideous! I can't look!

A young scientist named Victor Frankenstein wants to harness unknown forces and methods to create a living human being. (In the popular imagination, influenced by Alessandro Volta

, and Benjamin Franklin he wants to use electricity from lightning. However in the original novel, the method is never stated or described-- Victor says quite specifically that he will not do so, as he now realizes that he should have never created his creature in the first place.) His ambitious starting plan involves building an eight foot tall human being out of dead body parts (Again, in the movies and popular imagination-- in the novel, it's never stated how he makes the creature, but it's implied that he grew it); however, the creature is not only eight feet tall, but has yellow eyes and translucent skin[notes 1]. Its appearance disgusts Victor from the moment it comes to life; hurt by the rejection from his creator, the monster flees.

Victor's brother is murdered; despite evidence that a domestic servant was guilty, Victor is convinced his monster did it, and is powerless to prevent the servant's hanging. This upsets him; he runs away again to the mountains, where the monster catches up to him. During Victor's absence, the monster had taught himself to speak and read, discovered his appearance was so horrific that even he could not stand it, and befriended a blind man who turned against him when he was told of the monster's vile looks. Blaming Victor for dooming him to a lifetime of isolation and rejection, he killed Victor's brother and framed the servant for it.

The monster demands that Victor build him a bride so he might not have to suffer alone, insisting on his right to happiness and promising that they will vanish into the Amazon afterwards; should Victor refuse, the monster will see to it that he will ruin the scientist's happiness just like Victor ruined his. Victor initially complies, but fearing that he might be creating a race of monsters, destroys the bride[notes 2], not knowing that the monster has seen him doing it. The monster confronts Victor over his betrayal, and when Victor refuses to restart his work the monster threatens that he "will be with him on his wedding night".

The monster murders one of Victor's friends, and Victor is accused of it. Cleared of the charge, Victor returns home to marry, only to have the monster murder his bride just as he had previously threatened. Victor pursues the monster toward the North Pole, and is found by an Arctic expedition, half-frozen and on the brink of death. He tells his story to the expedition's captain, seeing in him the same desire for glory that led Victor to lose everything he held dear and expressing the hope that his fate will serve as a warning of the price of ambition. He dies soon afterwards from exposure.

Not long after this, the captain discovers the monster grieving over Victor's body. The Captain confronts the monster to denounce his crimes, only for him to tell him that he knows full well what he has done and deeply regrets all of it. The monster had hoped that achieving his revenge against Victor would bring him peace, but he now realizes that what he had done would ensure that the acceptance he sought from humanity would be forever lost to him. Overwhelmed with guilt and having nothing left to live for, the monster informs the captain that he shall kill himself by immolation, lest somebody find his body and be inspired to create another being that would be just as condemned to a lifetime of torment and ostracism as he was. The novel ends as the monster sails away on an ice raft, never to be seen again.

The enduring popularity of this story has led it to become a frequently referenced trope in tales about the alleged hubris or dangerous recklessness of science, or that genetically modifying organisms is somehow an affront to nature, even though Frankenstein's hubris isn't in "playing God" by creating life so much as refusing to take responsibility for the life that he brought into being.

Isaac Asimov labelled the irrational fear that science is mucking around with nature, and that the process may be on the brink of going terribly wrong, as "The Frankenstein Complex." Activists refer to genetically modified foodstuffs as "Frankenfood". The tale is used to justify vague beliefs that tampering with genetics, subatomic physics, and other fields of physical science will go unpredictably out of control or lead to the loss of our shared humanity.

Victor Frankenstein, repulsed by his creation, abandons it without giving the monster a name. In fact, no name for the monster appears in the novel, part of whose point is that the monster is an initially sympathetic character, sensitive and literate, shut out from human companionship by his hideous appearance and driven to bitterness and hate by the world's rejection of him. Author herself stated that creature's name is/would be Adam.

Purists therefore take offense when the name "Frankenstein" is applied to the monster. But it makes sense for the monster to bear his father's name, as the monster himself reasons. In any case, the name is too universal to change at this point. The monster's name is Frankenstein.[1]