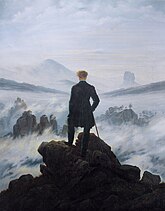 I knew I should have packed the anorak.

Romanticism was a European artistic,[note 1] intellectual, and literary movement that began during the late 18th century and peaked between the years 1800 through 1850, and remained a vital artistic force until at least World War I. Among other things, it was a reaction against both the Industrial Revolution, with its emphasis on commercial production and its disruption of traditional, rural folkways and settlement patterns; and also against the Age of Enlightenment, perceived as a form of haughty "aristocratic" rationalism.

The ideologies of both the French Revolution, and the reaction against it, were key factors in its development; as such it encompasses both the dewy-eyed visions of human potential of Jean-Jacques Rousseau, and the traditionalist authoritarianism of throne-and-altar political philosophers such as Joseph de Maistre, one of the leaders of the Counter-Enlightenment.

Hegel's idea of the zeitgeist, the "spirit of the age," the ghostly embodiment of the most important factors that are acting in human history at any given time, was frequently invoked as an idea conveying a vague sense of historical and natural inevitability to whatever the writer favored; rather like a European version of the "Mandate of Heaven." Hegel's concept of the zeitgeist gave thinkers a carte blanche to imagine sweeping historical scenarios manifesting various historical inevitabilities and grand narratives. As such, it spawned a number of such narratives, including Karl Marx's theory (underpinned by Hegel's dialectic) that civilizations pass through fixed socio-economic stages in a set order with communism at the summit, and other social movements with a strong millennial streak.

Romantics believed in art that cultivated strong emotions such as awe, terror, and fear; the Gothic movement in literature was either a forerunner or an early manifestation. It encouraged poetry to be freer in technique and effects, replacing the insufferably prosy heroic couplets favored by Augustan writers like John Dryden and Alexander Pope. It elevated folk art, folklore, and ancient custom as important artistic values, and frequently prized medievalism as well.

The idea of the genius is another thing we owe to Romanticism; it was the cornerstone of the aesthetic philosophy of the anti-rationalist philosopher Arthur Schopenhauer, who conceived of art as an intellectual refuge from the world of the blind and suffering "Will to Live."[1] In the ideal realm of disinterested contemplation of great art, your perceptions are purely intellectual and you can briefly forget that you are an animal ruled by pain, hunger, boredom, and desire. The idea of a bohemian, artistic lifestyle, of an avant-garde, all speak of a shared idea of romantic genius, so bedazzled by art or learning that they neglect the practical business of life. These ideas are still powerful forces in our world today, and shape our expectations of art -- and also science.[note 2]

Still, many familiar anti-science tropes, such as Mary Shelley's Frankenstein, originate with the back to nature aspect of Romanticism.

The music of the Romantic era shared many characteristics of other art forms of the time: an emphasis on folklore and mythology, medieval history (or popular conceptions thereof), and intent to create strong, often negative, emotions. However, several factors had influences specifically on the period's music.

First, the Industrial Revolution and attendant technological advances meant that instruments could be made to higher standards, smaller tolerances, etc. Winds in particular benefited greatly from improved manufacturing processes.

Second, the growing middle class generated both a growth of audiences and a change in the demographic of audiences, from the aristocratic classes to the (typically less musically knowledgeable) bourgeoisie, leading to works increasingly meant to be memorable and (dare we say it?) catchy rather than exceedingly sophisticated, and also allowing composers to make their living not by patronage but by popularity.

Third, the period saw composers beginning (or, according to some, comtinuing) to rebel against traditional musical conventions. In particular, while the emancipation of the dissonance was by no means in full swing (heh) yet, there are some early hints of experimentation with less-than-consonant harmonies of sorts previously considered anathema, such as the so-called Tristan chord (from Wagner's Tristan und Isolde, can be considered structurally a half-diminished seventh chord, but its function in regard to the surrounding passages is less straightforward).

Romantic nationalism was one of its less fortunate results; this variety of nationalism held that ethnic group embodied national character that should be cultivated, with a particular destiny, often embodied in a romantic legend or national myth, and in the process of inevitably working its way through history in the zeitgeist. National customs and the ties of the heart were more prized than the claims of reason. Johann Gottlieb Fichte expressed this idea with uncharacteristic clarity; ethnic groups united by language manifest a divinity:[2]

This idea in particular was pregnant with the potential of going terribly wrong. Romantic nationalism culminated in a series of nationalistic and democratic revolutions in 1848, which became known as the Year of Revolutions. Revolutionary violence in 1848 struck areas including Sicily, Hungary, France, Denmark, parts of Germany, and Poland. Romantic nationalism, in its political forms, typically included claims of territorial primacy: an "inalienable right" to a particular tract of land that is supposed to be the "heartland" of a culturally, linguistically, and ethnically defined people. Both the Third Reich (consider the motto Blut und Boden: "Blood and Soil") and the more out-there forms of Zionism represent later developments of this belief system born of romantic nationalism.

Hegel had a hand in this. In The Philosophy of Right, he wrote that "War is that condition in which the vanity of temporal things and temporal goods takes on a serious significance and it is accordingly the moment in which the ideality of the particular attains its right and becomes actuality."[3] Or war is an austere "moral tonic" that invests the vanity of material things with idealistic meaning, and directs us to higher goals. Hegel justified war because it generates patriotism, inspires the virile and active virtue of courage, unites nations, and prevents nations from sinking into complacency and stagnation; by war people "escape the corruption which would be occasioned by a continuous or eternal peace." Finally, Hegel believed that individuals have a "universal duty" to sacrifice themselves to the state.[4]

The idea of the genius also had an effect on political thinking. Thomas Carlyle believed that the key to understanding history was through heroes or "Great Men":

Once again, great men, larger than life, and plugged into the zeitgeist, are the movers of history. These great men are sent by divine providence to appear at their appointed times. Carlyle's hero worship was opposed during the 19th century by Herbert Spencer, who suggested that the Great Men were in fact the historically determined products of their societies.