Answers Research Journal (ARJ; ISSN 19379056) is a "peer-reviewed"[Note 1] creation "science" pseudojournal published by Answers in Genesis (AiG). ARJ features pseudohistory, bad philosophy, and Biblical literalist analysis pieces, but not much in the way of science.

As a journal, ARJ has several flaws.

In an article about ARJ and related issues, one of the contributors states the journal's point of view: "'We have a particular viewpoint,' [AiG researcher Georgia] Purdom stated, referring to the ARJ. 'We start with the Bible as being true. And many other journals do not. They are going to start with human reasoning as the basis for truth.'"[10] Given that this journal seeks to prove the truth of the Bible, starting with its truth is circular reasoning, and any actual attempt of scientific inquiry is necessarily riddled with confirmation bias.

Appropriately enough for a journal of pseudoscience, authors are free to publish under pseudonyms, ostensibly to avoid persecution for their beliefs.[5] In some cases, it may be against university or company policies to publish anonymously work that you supposedly did "in the line of duty." Although, quite honestly, if that's the best publishing you can do as an academic, you probably don't deserve tenure.

"Answers" lists a bizarre set of criteria for articles submitted for publication:

Number 4 is by far the most important. The parallel criterion in a science journal would read, "If the paper discusses claimed evidence for science, does this paper offer a very constructive positive criticism and provide a possible pseudoscientific alternative?" Most of the published articles are invalid by criterion 2 as they are mostly re-hashed creationist propaganda.

Unlike a scientific journal, no data or methods section is required for an Answers Research Journal article, which is okay, as pretty much none of the papers have data or methods backing them up any way.

Andrew A. Snelling[12] is the editor-in-chief, who claims to have "more than 24 years of technical scientific publication experience,"[13] including In Six Days, Why fifty scientists choose to believe in creation.[14][Note 2] Unfortunately the highlight of this experience includes founding the Journal of Creation. He is also quoted as saying:

Er... and where does the science come in?

By March, 2008 Snelling had written two of the first six articles in ARJ and had edited the journal in its entirety.[16] He has ties to the Institute for Creation Research, which funded some of his work.[17] What a trooper! 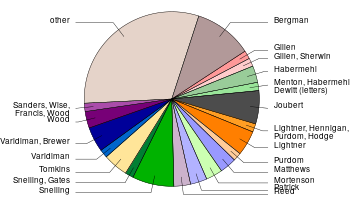 Authors in ARJ, through the 1st article of volume 5.

As of the first article of volume 5, 70% of the articles in ARJ had at least one author that is an author on another paper. Jerry Bergman has seven; Andrew Snelling has five; and Callie Joubert, Georgia Purdom and Larry Varidiman each have four. A very diverse field, indeed!

For AiG's take on an "evolutionist"'s attempt to "discredit" the journal, see their website.[18] Interestingly, no one ever seems to try to discredit science journals for some reason, nor would a science journal editor lambast a creationist for doing so. Interestingly, Snelling comments on the evolutionist's scientific inaccuracies in an e-mail, and comments that "[U]nless you can somehow seriously demonstrate in a proper and rigorous scientific manner and therefore convince me otherwise, I must reject your paper as bogus, and an attempt to claim a prize being offered on the Internet for successful deception."

One must wonder about the journal's peer-review process. Does that mean that Dr. Snelling is hand-picking articles for this journal instead of sending it to a few reviewers and finding the reviewers' consensus? Is it really professional to imply an intent to win an internet prize without more evidence, when the journal could just reject the article on its selection criteria? Why is the submitter's e-mail and the reply to a submitter made public and not kept confidential? Even if the submitter is kept anonymous, to use one's submission to make a point is questionable ethically.

14 volumes of the journal have been produced through 2022.

Highlights of vol. 1 include a piece on peer review, which takes (Sterile 2009) inline Harvard Referencing (McWicked 2007) to extreme (Human 2007, Pi 2010) and quite funny (Bob 2006) levels (Toulouse 2009) and an alternative explanation for the origin of oil that amounts to Goddidit. And the Great Flood also affected Mars.

Volume 2 ran through 2009. The volume contains 16 publications (all papers) and 210 pages. For comparison: one issue of the Journal of Evolutionary Biology - Volume 23 Issue 3 (March 2010) - had 17 research papers, 1 review paper and two communications for 210 page; there were twelve issues in total that year.[19]

Among the notable papers are one that says creationists should stop using conspiracy theories about Darwin as evidence (nice, but hardly science, even by the standards of the ARJ), six papers from a creationist microbes conference that are essentially review papers, and a paper on polonium halos.

The highlight of the year was undoubtedly Jason Lisle's much anticipated solution to the starlight problem, his not-so-groundbreaking anisotropic synchrony convention, where he proposes light moves at different speeds in different directions—an idea explored by real physicists for 50 years, before being dumped on the "interesting but unimportant" pile. More humorously, Larry Vardiman and Wesley Brewer discovered the technique used by mainstream hydrologists of publishing multiple papers with the same basic idea and calling each one a case study, even though on a practical level it is no different than the last paper. Combined with Snelling's two review papers on the geology of Israel, they managed to pad out what would have been a very thin volume (the five papers combining for a total of 163 pages). Although not without controversy, Todd C. Wood proposed that various species of hominids should be placed in the human baramin, sparking the first letters discussion.

Creation science was running a little thin this year, with seven papers being philosophical or theological papers rather than scientific, although it does mean that ARJ is closer to its baramin classification than ever before. A further two more articles were more archaeological in nature, the highlight being Matt McClellan actual padding out Egyptian chronology in his attempt to reduce it to fit the biblical frame work. The most science that took place in ARJ this year was when C. R. Twidal and J. A. Bourne responded to Ken Patrick's article in 2010 on the formation of Uluṟu.