From RationalWiki
(Redirected from Solar)
Jump to navigation Jump to search 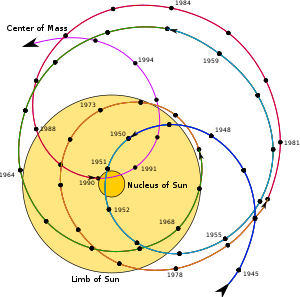 As has been described above, the Sun's luminosity increases during its evolution as its core contracts to maintain energy production with a smaller fuel supply, heating and thus increasing the rate of nuclear reactions. This will have a profound impact on Earth rendering it uninhabitable within around 1-3 billion years. However, by that time, humanity would be able to get off the planet entirely, assuming they didn't do anything stupid beforehand and get themselves killed.

Around five billion years from now, the Sun will exhaust its central hydrogen supply and will go full red giant 2.6 billion years later (yes, stellar evolution takes its time), things becoming really hellish in the planets of the inner Solar System as our star expands before all but Mars are absorbed by the red giant Sun. After burning helium on its core for a 100 million years and other 20 million years of instabilities once core helium is exhausted, the Sun will expel its outer layers to space as a planetary nebula and becoming so a white dwarf, a cooling stellar corpse that will fade into oblivion trillions of years later as a black dwarf.[13][14] Despite the white dwarf being about the size of Earth, it will be about half the mass the Sun is right now.

in 1859, could wipe out power networks over much larger areas.Cite error: Invalid <ref> tag; invalid names, e.g. too many Fortunately, NASA has since started closely observing solar flares so we don't get blindsided by the next major solar storm.