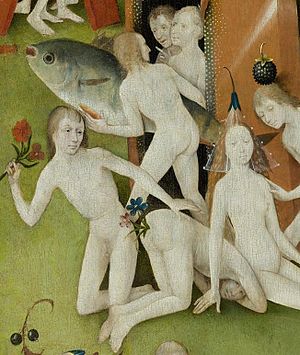 Hieronymus Bosch: the fine art of farting, from The Garden of Earthly Delights

Holding in farts too long causes the gas to dissolve into the bloodstream and exit the body via the lungs, literally causing butt breath. No kidding — holding in farts is a known cause of halitosis

What doesn't? Seriously though...

A fart is composed of:

Farts are caused by a mixture of air inhaled through the nose or mouth and gases produced by one's intestinal microbiome. The different smells attributed to farts are often related to the food consumed by the individual in the hours before digestion takes place, and are produced by hydrogen sulfide (H2S — "eggy") and Methanethiol (CH3SH — "cabbagey").

Both carbon dioxide and methane contribute to global warming, though the amount contributed from farts (and burps) is probably minor.[3]

"Some say that he [the Emperor Claudius] planned an edict to legitimize the breaking of wind at table, either silently or noisily – after hearing about a man who was so modest that he endangered his health by an attempt to restrain himself."[4]

It is safe for surgical personnel to fart in operating theaters, at least as far potential infection goes. An experiment was conducted, whereby 2 Petri dishes were separately farted at from distance of 5cm. The experimenter farted at one fully clothed and at the other without trousers. The clothed fart did not produce a bacteria culture on the Petri dish but the trouser-less fart produced two types of bacterial cultures on the dish. It was deduced that one of the cultures was produced by the fart itself and the other by skin bacteria that was blasted onto the dish. It was further deduced that farting in the operating theater is safe because clothing acts as a filter against bacteria.[5]

Farts are frequently viewed in Western culture as something of a juvenile joke. They are very popular in low-brow comedy programmes[7] which increases this belief, although even grown men and women are known to laugh endlessly when someone farts in a most inappropriate time. However, it is generally considered inappropriate and bad-mannered to fart in the vicinity of other people in certain most basically all social situations. Nonetheless, some people don't take this into consideration.

Farting in any of the following social situations is — generally — frowned upon:

What to do if you have farted[edit]

If you have farted there are many actions one can take. This generally depends on the company. If you have farted in an elevator do not move, stare straight ahead and do not speak. Any kind of movement will be interpreted as guilt. If with friends and you fart at first do not say anything. While the jury is out on whether to immediately blame someone or to wait until someone else brings up so you can blame them you'll still go through three phases (caveat: your friends may operate under the common "he who smelt it dealt it" mentality) —

When with your significant other it is common practice to fart on their face and laugh like a giddy schoolgirl.

Foods that make you fart[edit]

According to Oprah.com [10] in a scientific experiment conducted by Dr. Jeff Leach, two experimental subjects put on special rubber pants with tubes attached. The expulsive gas was directed into airtight bags strapped to their backs. After 24 hours, the gas was released into a measuring jug. The woman subject produced 3 liters, while the man produced 3.3 liters.[11]

These methods are only for advanced practitioners.

Pulling down your pants to fart whilst simultaneously jumping and turning 180 degrees to blast taller people with your in-flight emissions.

Fart on an elevator just before the door opens when you are alone. Rush out, leaving the new passengers to enjoy the aroma.

If flatulence lasts more than 10 seconds, it is commonly referred to as a Rump Roar, since it can often be as startling as the sound of a pouncing lion.

Ask someone to pull your finger, and when they do, let loose a ripper (when with your significant other this can be replaced with "pull my knob").

Can be done walking down a nearly empty hallway or grocery aisle. Works best when you've worked up a fairly large amount of gas (in the Silent But Deadly form), and swiftly walk down the hallway/aisle while expending your "pesticides".

This works best if people either don't know what you ate for lunch, or had the same thing.

Popularized on The Sarah Silverman Show, this involves leaving a serious "breakfast burrito" flavored gift behind in a car that is sealed up and left in the sun all day for your significant other to enjoy.

Mara Sidoli won the 1998 Ig Nobel Prize for Literature for her article "Farting as a Defence Against Unspeakable Dread."[12][13]

Two species of herring have been shown to communicate by farting.[14][15] The researchers involved in this work won the 2002 Ig Nobel Prize in Biology for their efforts.[12] See the National Geographic video.[1]

WARNING: Do not attempt to mimic use of the F.A.R.T. without the supervision of a certified proctologist.

The F.A.R.T. (Flatulent Assisted Rectal Tubing) is a controversial transhumanist device, which allows the human rectal cavity to preserve and direct volumes of butt-belch otherwise reserved for ocean-dwelling mammals, such as whales.[17]

Its documented use in an episode of Kenny vs. Spenny

(in which the competition was Who Can Blow the Biggest Fart?[18]) resulted in what has since been called the "longest fart ever to be captured on film".[19]

The one weakness of the device becomes apparent at 0:50 in the above clip.

The farting competition in question used methane detectors to measure the strength of the farts. The F.A.R.T., relying on air, obviously fails to produce a positive reading for methane. This didn't limit its usefulness as a strategic psyching device, however.

In theory, there is — designwise — nothing stopping a crafty engineer from "loading" the F.A.R.T. with methane, the way Kenny manually does with air at the start of the above clip.

The proper retort to "He who smelt it dealt it." is "He who denied it supplied it."