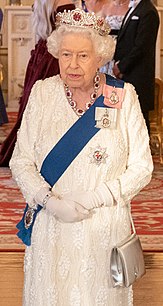 Elizabeth II (1926–2022), better known as "the Queen" if you were one of her subjects, at least. (Unless you lived in the Channel Islands, where she was the Duke — and not Duchess — of Normandy; or on the Isle of Man, where she was the Lord of Mann[note 1])

At the time of her death, she was the monarch of the following countries:

She was, at one point or another, the ruler of some 40 independent nations, all of which were at one point in time British colonies or possessions (except, of course, for the UK itself). The last country to stop having Elizabeth II as head of state, while she was still alive, was Barbados, which became a republic at the end of November 2021.[1]

On her seventieth year as head of state of the United Kingdom, influenced by Black Lives Matter, the Windrush scandal

, the demands for reparations over British slavery in the Caribbean, and the attitude of her family to her mixed-race granddaughter-in-law Meghan, her realms in the Caribbean openly said they were looking to say bye-bye to her. This was started off by Barbados, later followed by Jamaica, which said it was planning to scrap the monarchy as its head of state by August 2022.[2] After that Belize,[3] the Bahamas,[4] Antigua and Barbuda, St. Lucia,[5] St. Vincent & the Grenadines and Saint Kitts & Nevis.[6]

When she first ascended to the throne in 1952, there was some confusion as to her royal title, since Elizabeth I had ruled England, what is now Northern Ireland and Wales in the 16th century, prior to the Union of Crowns, while there had never been a Queen Elizabeth of Scotland.[note 2] There were even a few bewildering lawsuits from angry Scottish people,[7] and bomb threats against various bodies. The compromise they came up with was that for future monarchs, they would use whichever regnal number is higher for England or Scotland (which they'd been unintentionally doing all along). This is why postboxes in Scotland bear only a crown and not the "E II R" insignia seen elsewhere in the UK. Not a lot of people (outside of Scotland, obviously) know that.

Interestingly, she was the one who insisted upon televising her own coronation, and had happily embraced new technologies[note 3] and shown appreciable support for science. She served in World War II as a mechanic and an ambulance driver, which may partly explain her interest in technology. She was also known to be a somewhat avid fan of the BBC science fiction series Doctor Who.[8] In fact, for many years the only BBC director general to not be knighted during Elizabeth II's tenure as monarch was the one responsible for the show's cancellation in the late 1980s. That was before a series of BBC scandals from the Hutton Inquiry to Jimmy Savile

led to DGs falling like flies. There is some suspicion that this may partly explain her apparent boredom during the opening ceremonies of the London 2012 Olympics (one episode of Doctor Who had the titular Doctor light the cauldron for the 2012 Olympics). She was also somewhat known for having a rather "wicked" sense of humour, which was shown quite amusingly by the way her entry into the stadium was portrayed (with the help of a stunt-double) at the aforementioned Olympic Games' opening ceremonies as seen here. This may have more to do with the nature of British humour and wit in general than with the Queen's wit in particular, however.

As she refused to give interviews, her political opinions, as well as any religious beliefs she had, if any, are pretty much unknown to anyone outside her close family and friends (she was, of course, head of the Church of England, but since this position is hereditary, it doesn't necessarily mean she actually believed in God; that said, what little we know of her suggests that she actually preferred the Church of Scotland, which is Presbyterian--of which she was as monarch a lay member, albeit also its former hereditary "defender"--and its low-church piety). With respect to previous monarchs of the United Kingdom, however, she was characterised by her relative sanity; her ancestors were mostly ego-hungry, power-mad and generally off-the-wall mental (also known as German) while one of her direct offspring is considered a bit of a buffoon who has been behind several anti-science lawsuits and seems to think homeopathy works.[9] We all kind of hoped he'd die before his mother so his bullshit would only be enabled for so long. Goat help us all.

From 1993 to her death, she was a full-fledged UK taxpayer.[10] So she basically paid herself 63 pence per year to host parties and wave, which is a nice job if you can get it.

As the Head of State, the queen was supposed to be impartial in political matters. She maintained a fairly good record compared to her son and current king, Charles III, who won't shut up on certain topics. However, there have been lapses in the royal poker face.

One controversial example was the dismissal of Australian Labor Party leader Gough Whitlam as Prime Minister of Australia in 1975, which was done by the Governor General on dubious constitutional grounds; for a long time there were question marks over whether the Queen knew or approved of this act which has been likened by some to a coup against the democratic government. Papers finally released in 2020 after 45 years of campaigning suggested that senior figures trying to get rid of Whitlam (the Governor General John Kerr and the Queen's private secretary Martin Charteris) deliberately kept it from the Queen, preserving her aura of impartiality.[11]

There were a lot of people seeking to uncover her attitude to referenda for Scottish Independence in 2014 and Brexit in 2016. In the run up to the 2014 referendum the Queen advised Scots to "think very carefully about the future". This was interpreted by pro-independence conspiracy theorists as a gross invasion into Scottish affairs, although it's unclear if they didn't want people to think about the future.[12] A feeling that the queen opposed independence (despite the SNP promising to keep her on) was heightened after the result when David Cameron commented that the queen "purred down the line" after Scotland voted no to independence; in saying this, Cameron committed a serious breach of protocol as well as sounding deeply creepy in a sexual way.[13]

The Queen's opinions on Brexit and the European Union were much debated. In March 2016, The Sun, a madly anti-EU and pro-Royalist paper, claimed the Queen backed Brexit. She reportedly made comments at a private party attended by several senior politicians, and Michael Gove was accused of leaking it. Senior BBC journalist Laura Kuenssberg later said that the Queen had commented, "I don't see why we can't just get out. What's the problem?"[14] Whatever the truth, it has not aged very well.

There was an earlier mini-scandal in 2012 when it was revealed that the Queen had made comments about Abu Hamza, a Muslim cleric with pro-terrorist sympathies, and asked why he couldn't be arrested.[15]

Reportedly, she also argued with Margaret Thatcher, demanding the Conservative government take more action against South Africa's apartheid regime in the 1980s, and was critical of Turkey's possibly joining the EU, saying at a Christmas party (possibly after a few gins) "Oh, we don’t want Turkey to come in for a long time."[16]

The Queen Elizabeth 2 (Arabic rather than Roman numeral, colloquially, the QE2) was a ship that sailed the oceans blue from roughly 1969 to 2006 or so. At least one RationalWikian was transported from the Old World to the New stowed aboard her.[note 4]