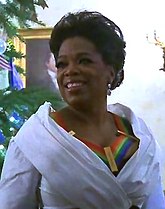 Oprah Winfrey (1954–) is one of America's most popular and influential talk show hosts.

If Winfrey likes your stuff enough to feature it on her show, you'll probably get rich. Your book, your show… your hideously fraudulent woo.[1]

Filming a daily daytime talk show for about twenty years naturally means that there will be a lot of time to fill. Sadly, Winfrey chose to fill this time with woo promoters. She is a relentless promoter of pseudoscience, some relatively benign, some downright dangerous:

A number of notable media charlatans, including McCarthy, Oz, and Dr. Phil McGraw got their own television shows after gaining a measure of prominence through their association with Winfrey.

Miracle Detectives is a show on the Oprah Winfrey Network, featuring Randall Sullivan and neuroscientist Indre Viskontas investigating claims of miracles. Despite Viskontas typically ruling out any supposed miracles with science, the show usually ends with Sullivan ignoring the evidence in favor of a more comforting answer of "I don't know about that."

In an October 2013 show, Winfrey made some cringeworthy comments that revealed that she holds some common prejudices about atheism (and some wooish beliefs about the nature of God). She questioned her guest, Diana Nyad — a woman who had recently swum from Cuba to Florida, and an atheist — how it was possible to be both an atheist and "deeply in awe". After Nyad replied that she sees no contradiction and that she "can stand at the beach's edge with the most devout Christian, Jew, Buddhist and weep at the beauty of this universe, and be moved by all of humanity", Oprah managed to drop something that pisses off both atheists and theologians, denying that atheists can feel awe and making a muddle of the concept of a personal god:

The conversation then went a bit further in the same vein. The exchange caused some predictable reactions in the atheist blogosphere (i.e. ridicule), and that apparently was notable enough to cause further media coverage of the event.[12]

More important, however, was the (unintentional) implication that those of us who find beauty in plants and animals and the universe itself can't possibly be godless. That's a common stereotype atheists face and it's an incredibly pernicious one, made even worse because it was repeated by a celebrity of Winfrey's stature.[13]