From RationalWiki
(Redirected from Geologist)
Jump to: navigation, search

A geologist in the Arctic.

The science of geology ranges from the study of individual rocks, to the study of the composition of the entire Earth. In between, geologists work to explain why the surface of the land looks the way it does, where valuable mineral resources might be found, how the land used to look based on the minerals deposited there, and how the continents have moved over time, creating new mountain ranges and oceans. Much to the dismay of Fundamentalist Christians, all of this provides evidence for the fact that this is a very old planet. Indeed it would be very difficult to conduct any sort of mineral exploration using a young-Earth hypothesis.

Geologically speaking, a rock is a naturally occurring solid aggregate of minerals and mineraloids.[1] To be considered a mineral, a substance needs five traits: one, it is natural, two, it is solid,[note 1] three, it is inorganic, four, it needs a crystal structure, and five, it has a consistent chemical composition.[note 2] Some common examples of minerals include quartz, halite (table salt), and ice. Mineraloids are things that don't necessarily fit all of the criteria, whether due to having no crystal structure (which includes glasses like obsidian and pumice as well as opal), being liquid (like water and petroleum), being organic (like pearls and amber), or having no consistent chemical composition (like coal, which additionally is organic and has no crystals). Some of these definitions have been contested in modern geology. For example, many geological engineers find it easier to ignore the "natural" part of the definition (e.g. by treating concrete as a rock) and may use the term "anthropic rock" to describe materials like these,[2] while many geologists have questioned the "inorganic" part of the definition with the discovery that an increasing amount of supposedly inorganic minerals like magnetite and calcite can be formed by biological processes.[3] Regardless, mineral-stuff and rock-stuff provide important ways of learning about the geological processes and history of the Earth.

The minerals that are used to determine Mohs hardness.

There are around 5,400 known minerals, with around thirty to fifty more being discovered every year.[4] Naturally, scientists have developed a few ways in which these minerals can be identified, with the most common indicators being: 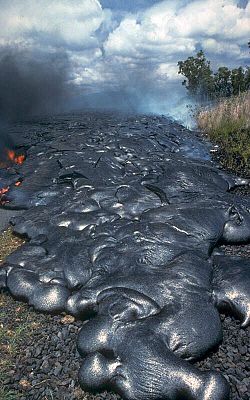 A pahoehoe lava flow in Hawaii, resulting in the creation of extrusive mafic rocks (i.e. basalt)

Igneous (from ignis, Latin for "fire", compare English ignite) rock is produced by the welling up of molten magma from inside the Earth, which then solidifies as it cools. Geologists divide igneous rocks into "intrusive" and "extrusive". Extrusive rock cools quickly and near the surface via volcanoes and rifts, and tends to have small crystals (barely visible with the naked eye), as can be seen in basalt. Obsidian is a special case, as it cools so quickly that crystals don't have time to form and is instead more like glass. Rock is said to be intrusive when magma cools deep under the surface of the Earth. Here the crystals form very slowly and are thus much larger, as for example, the large crystals of quartz, biotite, and feldspar that are visible in plutonic rocks like granite.

Igneous rocks can also be divided based on their silica content. Mafic or basaltic rocks comprise primarily low-silica minerals such as amphibole and olivine and make up most oceanic crust. Felsic or rhyolitic rocks are made mainly of high-silica minerals like feldspar and quartz and make up most continential crust. Rocks with large concentrations of both mafic and felsic content are called intermediate or andesitic and mainly form in oceanic-continental subduction zones (as in the region of the Andes). Sometimes gas bubbles will form in lava (similarly to the dissolved CO2 in soda) and this will result in the formation of vesicular rocks like pumice and scoria that have many visible holes in them.

Igneous rocks are the only type of rock used for radiometric dating, since melting resets the isotope composition of rock. Igneous rocks can also tell about the history of Earth's magnetic field, as the iron in them will point in the direction of the north magnetic pole; this can give us information such as when the poles switched and can allow us to interpolate the movement of the continents.

The Garden of the Gods in Colorado.

Sedimentary rocks are aggregates of smaller bits of rocks, minerals, and other solids that have been compacted and fused together by various processes. They may form from remnants of any rock type, including other sedimentary rocks.

Over time, the action of weathering and erosion (via temperature changes, rain, wind, chemical reactions, and the moving action of streams and rivers) breaks rock down into smaller and smaller pieces. These are washed downstream and eventually deposited in an ocean, river, lake, etc. as sediment. Lithification (turning to stone) of sediments occurs over thousands of years as layers of deposited sediments accumulate, and at depth are compacted by the weight of overlying sediments. The grains are fused together by the dissolution of minerals (just like salt sticking to your body after leaving the ocean) in a process called cementation. As a sedimentary example: quartz sandstones form where quartz sand is the primary sediment, and is typically cemented by silica, though in oceanic settings, calcium carbonate is also quite common.

Sedimentary rocks can also be biological in origin. Limestone, a common sedimentary rock consisting of calcium carbonate, is formed by some shell-bearing organisms like corals, bivalves (clams, oysters, etc.), and foraminifera (or forams: a micro-organism). Indeed, the White Cliffs of Dover are composed almost entirely of the skeletal remains of forams. Coal is a sedimentary rock that is created by the buildup of dead plants. Non-biological sedimentary rocks are typically classified according to their grain size (gravel, sand, silt, clay), from conglomerate/breccia, sandstone, siltstone, and mudstone/shale in order of decreasing grain size.

Uniquely, sedimentary rocks are the only rock type that contains fossils, as the melting of igneous rocks or the heat and pressure that metamorphic rocks are subjected to break down any such structures. Sedimentary rocks can also tell us a lot about the environment where they were deposited millions of years ago. 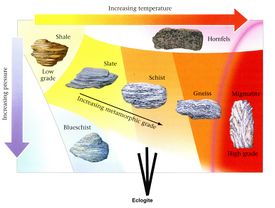 This graph shows how shale (a sedimentary rock) changes as it is subjected to increasing heat and pressure. If it were to go any further on this graph, it would melt and become igneous rock.

The original materials of metamorphic rocks used to be either sedimentary or igneous, but have undergone chemical changes due to being subjected to enormous heat and/or pressure. Through the action of the movement of the Earth's crust, particularly continental collision, or when the Earth's crust is pulled downwards towards the interior in a process called subduction (more about this later), rocks of any kind can be subjected to enormous pressure and heat and may transform (or metamorphose) into metamorphic rock. Geologists classify metamorphic rocks by how strongly they have metamorphosed from the original rock. Low-grade metamorphic rocks look a lot like the rocks they came from (e.g. slate is the metamorphosed form of shale, and they look almost identical, but are different physically), while high-grade metamorphic rocks look like igneous rocks, but differ in various unusual textural features such as strong veining or lineation. Metamorphic rocks can tell us about the processes that have occurred deep underground, although geologists analyze seismic waves to determine structures inside of Earth.

Tectonic plates of the Earth.
See the main article on this topic: Plate tectonics

Extensive exploration and mapping of the seafloor after World War II led to the discovery of a deep rift running down the center of the Mid-Atlantic Ridge. In the early 1960s Harry Hess of Princeton University and Robert Dietz of the University of California suggested that the seafloor separates along the rifts in mid-oceanic ridges and that new seafloor forms by upwelling of hot mantle materials in these cracks, followed by lateral spreading. By 1967, separate lithospheric plates had been identified, which explained phenomena such as high levels of volcanic and earthquake activity that take place between the plates. By the end of the 1960s the theory of plate tectonics proved to be a unifying concept that pulled together diverse theories and explained a the large body of observations in the field.[5]

About twelve large plates, and several smaller plates, slide over a weak asthenosphere, carrying with them the continental and oceanic crust. Where plates collide, tectonic forces cause the continental crust to buckle upward, producing mountains such as the Himalayas or the Rocky Mountains. Oceanic plates are denser than continental plates, and at boundaries called subduction zones, the extra density causes one oceanic plate to sink beneath another, re-entering the mantle and recycling the oceanic crust. Where plates move apart, at mid-oceanic ridges and at continental rifts like East Africa 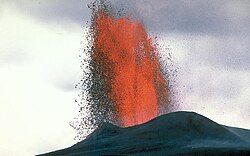 Volcanism and deformation bring rocks to the surface of the Earth from depths as great as 50 to 100 km. Scientists can make inferences about some of the properties of the Earth at these depths by studying these rocks. But far more information has been provided through the use of seismic waves created by natural earthquakes, and by controlled explosions designed to learn more about the composition of the Earth, including underground nuclear explosions. These data have revealed that the Earth is composed of three main layers: the crust, the mantle and the core. The crust, the outermost layer, varies in thickness from about 5 km under oceans to about 40 km under continents. The mantle consists of an outermost zone about 100 km thick named the lithosphere, which is relatively strong and makes up the bottom part of tectonic plates. The layer below is a weak, partially fluid solid called the asthenosphere, which ends at a depth of about 300 km. Between 400 km and about 2900 km atoms are packed closer and closer together by extreme pressures, creating a crystalline structure with larger grains, and different minerals, than the layers above. The Earth's core extends from a depth of 2900 km to the center. Seismic wave propagation through the core indicates that the upper two-thirds of the core are liquid, while below a depth of 5100 km pressures are so great that the core becomes solid again.

It is approximately 4.6 billion years old. Young-Earth Creationists, deal with it.