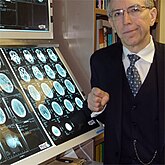 The God helmet is an apparatus developed by Stanley Koren and neuroscientist Michael Persinger that is placed on the head of an experimental subject to study the effects of subtle stimulation of the brain's temporal lobes by low frequency magnetic fields.[2]

According to Persinger's accounts of his experiments, many subjects reported "mystical experiences and altered states"[3] as well as a "sensed presence" while wearing the helmet. This detail was picked up in popular media and promoted in several TV documentaries, earning the device the nickname, "The God Helmet".[4]

The basic foundations of Persinger and Koren's experiments have been criticized in the scientific press. The fluctuating magnetic fields generated by the helmet are approximately as strong as those generated by a land line telephone handset or an ordinary hair dryer, but far weaker than that of an ordinary refrigerator magnet, and approximately a million times weaker than transcranial magnetic stimulation. In short, the magnetic fields generated by the God helmet are far too weak to penetrate the cranium and influence neurons within. [5]

One study has claimed to replicate[6] one of Persinger's early studies,[7] They reported that their experiment ruled out suggestibility as an explanation for God Helmet results, and that an analysis of their subjects’ verbal reports revealed significant differences between the speech of subjects and controls, and less robust effects for suggestion and expectation. However, the study is published in the pseudojournal Journal of Consciousness Exploration & Research.

A prior attempt at replication published in the scientific literature reported a failure to reproduce Persinger's effects and the authors proposed that the suggestibility of participants, improper blinding of participants or idiosyncratic methodology could explain Persinger's results.[8] The theoretical basis for the God helmet, especially the connection between temporal lobe function and mystic experiences, has been questioned.[5]

Richard Dawkins had the device tested on him; appearing in the BBC science documentary series Horizon. He did not have a 'sensed presence' experience, but instead felt at times 'slightly dizzy', 'quite strange' and had sensations in his limbs and changes in his breathing. Persinger explained Dawkins' limited results in terms of his low score on a psychological scale measuring temporal lobe sensitivity.[9]

Persinger and colleagues also developed a device nicknamed "The Octopus" which uses solenoids around the whole brain, in a circle just above subject's ears. Persinger’s research associate Todd Murphy, reports that his similar devices are able to modulate emotional states in addition to enhancing meditation and generating altered states. An experiment found no change in emotional responses to evocative pictures but said further investigation was required. [10]

Versions of the device were found being worn by the members of Aum Shinrikyo responsible for the 1995 Tokyo subway sarin attack.[11]