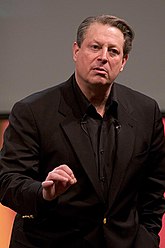 An Inconvenient Truth is a 2006 liberal atheist Californian[1] hippie green propaganda documentary documenting Al Gore's campaign to educate citizens about global warming via a comprehensive slide show, which he had shown thousands of times. Laurie David was so impressed with Al Gore's campaign (which started on the day The Day After Tomorrow came out) that Gore decided to turn it into a film. As the 10th best documentary film in the US, it has raised international awareness of climate change and environmentalism in general. A book of the same name was published at about the same time the film was released.[2]

Not surprisingly, when the film started being shown on schools' science curriculum, it generated controversy for teaching kids liberalism.

Origins of the film[edit]

Al Gore was long interested in global warming after taking a course with professor Roger Revelle, one of the first professors to measure CO2 in the atmosphere.[3] After writing the book Earth in the Balance: Ecology and the Human Spirit, and after losing to the future president of Jesusland, George W. Bush, he returned to environmental awareness and presented these facts around the US thousands of times.[4] From this slide show, the movie emerged.

Points in the film[edit]

Al Gore presents his film in an easy to understand format so as to reach the maximum number of people (though most of the film was dedicated to the disappearing ice on Earth). Here are the key points in the film:

. Also, Al Gore shows how ridiculous it is to have to chose between the Earth and the economy, and how there has to be a "balance" between the two.

While the movie was generally praised for alerting its audiences about the real threat of global warming, it didn't go without its obvious set of denialists. Ronald Bailey in the libertarian media Reason (magazine) said "Gore gets [the science] more right than wrong" but exaggerates the risks,[5] and an actual MIT physicist named Richard Lindzen asserted that Al Gore was being biased for his own political gain[6] (as if that gave him right to publish in the Wall Street Journal).

One of the more reasonable arguments is that the documentary never mentions the threats to the indigenous peoples (particularly Arctic natives) that are faced with global warming.[7]

Yup, there's supposed to be a sequel, considering the ceaseless extreme weather conditions for the planet Earth.