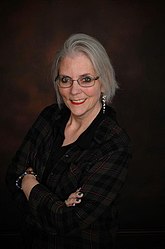 Guerilla Skepticism on Wikipedia (GSoW) is a group that edits Wikipedia articles to improve skeptical content.

It's also the tyrannical shadow government of Wikipedia, censoring views not in alignment with the Skeptical Scriptures.Do You Believe That?

GSoW was founded by Susan Gerbic, co-founder of Monterey County Skeptics, with the intent of improving skeptical content on Wikipedia and guiding fellow skeptics on how to contribute.[1][2] Gerbic, a Center for Inquiry fellow and adviser to Skeptical Inquirer magazine,[3] is also active in local skeptic organizations, and took part in a "sting" operation against self-proclaimed psychic and ghost hunter Chip Coffey.[4]

GSoW have written or improved a number of Wikipedia pages about skeptics, science educators, and science-based medicine proponents who push back against pseudoscience and the paranormal in the media, such as Ken Feder, Sara Mayhew, Indre Viskontes, Kiki Sanford, Bryan & Baxter, Jennifer Ouellette, Tim Farley, Alan Melikdjanian, William B. Davis, Mary Roach, and Sikivu Hutchinson. They also try to make sure all claims on paranormal themed pages are balanced and have citations to notable secondary sources. (For example, lots of obscure psychics have Wikipedia pages full of nutty claims that often turn out to be written by the psychics themselves.) GSoW also assists with translations of high-importance skeptical articles from English into other languages, such as Arabic, Dutch, Russian, Spanish, Swedish, and Portuguese.[5]

GSoW is very unpopular among the many supporters of paranormal, pseudoscience, and fringe science theories who would argue that their cranky views are the least bit plausible, or even of any noteworthy relevance to the scientific consensus view on any given topic. These brave whistleblowers frequently accuse GSoW of devising an organized effort to prevent fringe lunacy from permeating Wikipedia thereby bolstering the scientific quality and skeptical tone of the articles. This, of course, cannot stand, and so resistance needs to be mounted.

In March 2013, Robert McLuhan wrote on his blog Paranormalia that GSoW were coordinating the actions of editors at the online encyclopedia to label paranormal subjects as pseudoscience and to promote a skeptical point of view about psychic phenomena. He also claimed GSoW editors had destroyed Rupert Sheldrake's Wikipedia article.[6][7]

The Guerrilla Skeptics apparently did not take kindly to being outed. Since June, they have gone on the attack to seriously change Rupert’s Bio. On June 14th, he had a relatively stable and neutral biography, which is documented from June 14th. Compare this to the pretty current September 28th version. The changes are quite drastic and unfavorable to Sheldrake. [....] Sheldrake’s Wikipedia problem is a bit unusual because he appears to be the subject of a coordinated attack by an ideologue organization. [....] Pretty much all the “fringe” topics are subject to control by a large number of ideologues working together. They call themselves skeptics, but they are really just true believers of a different sort. They have a long history of ideologue behavior, -particularly towards the paranormal- that goes back to the 1900’s. They were organized long before Wikipedia was created and quickly moved onto the Internet when it became widely used. The Guerrilla Skeptics organization is merely an extension of what skeptics were already doing: working to control information in a way that is favorable to their ideology.

Weiler wove a complex conspiracy theory that claimed Sheldrake's article was being unfairly edited to marginalize his ideas, not just by Gerbic's group, but by organized skeptics everywhere. Encouraged by McLuhan and Weiler, Sheldrake endorsed the new conspiracy theory, posting a wacky rant titled "Wikipedia Under Threat".[9] Gratified by Sheldrake's response, Weiler erupted with a series of blog posts that accused atheists and materialists of taking over Wikipedia.[10][11] Weiler soon began posting his accusations of a skeptical conspiracy on the discussion page of Wikipedia's Rupert Sheldrake article.

The Guerrilla Skeptics are well trained, highly motivated, have an ideological agenda, and operate in teams, contrary to Wikipedia rules. The mastermind behind this organization is Susan Gerbik. She explains how her teams work in a training video. She now has over 90 guerrillas operating in 17 different languages. The teams are coordinated through secret Facebook pages. They check the credentials of new recruits to avoid infiltration. Their aim is to "control information", and Ms Gerbik glories in the power that she and her warriors wield. They have already seized control of many Wikipedia pages, deleted entries on subjects they disapprove of, and boosted the biographies of atheists.

Sheldrake claimed the group is unfairly boosting the biographies of skeptics and adding biased information to denigrate paranormal subjects. Sheldrake accused GSoW of having "captured the Wikipedia page about me" and of "rewriting my biography with as much negative bias as possible, to the point of defamation."[12][13]

An increasing number of people have taken up the narrative, including Deepak Chopra[15][note 1] and David Wilder.[18][19][20]

Rome Viharo, posting under the username Tumbleman,[21] appeared on the Sheldrake article's Talk page to accuse skeptics of conspiracy, stating his purpose there was to oppose "bias" by members of Guerrilla Skepticism on Wikipedia (the group Sheldrake claims is conspiring against him),[22] Viharo has since denied that he thought GSoW was to blame.[23][24]. After finally being nailed for sock puppetry and disruptive behavior on Wikipedia,[25] Viharo (posting as Tumbleman) was indefinitely blocked from editing by the unanimous decision of five Wikipedia administrators.[26]

One astrologer claimed that Sheldrake and Viharo were "slandered, mocked and ridiculed" by GSoW due to "the Sun opposed by transiting Pluto" and other planetary conditions (which are somehow also connected to Julian Assange).[27]

Even the BBC got pulled in, giving Sheldrake 5 minutes on their World Service programme, without bringing any opposing views on.[14]

According to the woo-friendly Epoch Times, Sheldrake believes the aim of GSoW is “to control information" and that "Ms Gerbik (sic) glories in the power that she and her warriors wield.”[28]

Occasionally it is claimed that RationalWiki is involved,[29] though we know of nobody active in both.

Paranormal researcher Callum E. Cooper has claimed that GSoW are paid editors, although he gives no evidence for this.[30]

Despite the name "Guerrilla Skepticism", the edits actually being made by the group were rather tame and typically uncontroversial, such as improvements to biographies of high profile skeptical personalities like Carl Sagan or additions of criticism to balance fringe claims in articles like Chupacabra.

However, there was never any evidence the GSoW group had ever edited the Sheldrake Wikipedia article. In fact, the editor who did most of the editting to the article (Vzaak

) posted a response to many of Sheldrake et. al.'s points.[14][31] According to skeptic Tim Farley,

[T]he central claim, that Guerrilla Skeptics are controlling Sheldrake's bio, is demonstrably false. It is a classic conspiracy theory. I asked Susan Gerbic directly, and she confirmed that Sheldrake's bio was not on their current project list. But you don't need Susan's word, just search for the name "Sheldrake" at the project blog and you find only a post about a related article, and no indication they had worked on Sheldrake's bio. (Believe me, they're not shy about showing off their work – it's part of their outreach efforts). Look in the editing history of the people actually editing Sheldrake's article, and you'll find only cursory overlap with articles the Guerrilla Skeptics have bragged about editing.

Hahaha we didn’t touch his page, even with our minds! We have a list of pages we want to edit and Sheldrake isn’t even on it! Maybe that’s the real reason for his tantrum ;-)

In December, 2013 GSoW founder Susan Gerbic discussed how the conspiracy theory had no real basis in fact, but woo-believers were still promoting it.[35]

My team has been very open about what we edit.  In fact every single WP editor's edit history is available with a couple clicks. Its easy to find out who edited what, when and even the time they edited.  But they didn't care about that evidence stuff.  The only thing important is the conspiracy.

GSoW's activities have apparently not been affected by the entire incident.[36]

Since Wikipedia policies actually require that pseudoscience and other fringe views be marginalized, the group's work was completely in sync with the encyclopedia's goals. A notice at the top of Sheldrake's talkpage mentions many relevant WP policies,[37] including WP:FRINGE:

Wikipedia summarizes significant opinions, with representation in proportion to their prominence. A Wikipedia article should not make a fringe theory appear more notable or more widely accepted than it is. Claims must be based upon independent reliable sources. If discussed in an article about a mainstream idea, a theory that is not broadly supported by scholarship in its field must not be given undue weight, and reliable sources must be cited that affirm the relationship of the marginal idea to the mainstream idea in a serious and substantial manner.

Weiler responded to WP:FRINGE by saying:[8]

[T]he skeptics use a tactic known as "undue weight." Labeling something as fringe, which has been done to a wide variety of topics on Wikipedia allows skeptics to give extra weight to their point of view because by their reasoning, there are way more people that oppose these ideas than support them. This brings to mind the Orwellian phrase: "All animals are equal, but some are more equal than others." And they’ve got legitimate second sources because they found some articles with a sentence or two that said something in favor of their argument.

Proponents of the GSoW conspiracy theory[edit]

Guerrilla Skepticism on Wikipedia had been investigated by ArbCom in 2022. Other than one of the editors being topic banned, the motions adopted were general praises from arbcom.[38]