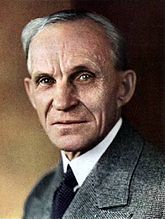 1935 portrait of Henry Ford. Whatever you do, don't stare into the eyes.

Henry Ford (1863–1947) was an American engineer and businessman whose impact on 20th century transportation and industry was profound. In 1903, he founded the Ford Motor Company, ownership of which would eventually result in Ford becoming one of the richest and most well-known people in the world. In 1908, he introduced the Ford Model T, the first motor car which many middle-class Americans could afford. Consequently, the car changed from being a plaything for the very wealthy to a practical mode of transport. Although he did not invent it, Ford popularized assembly line manufacturing. He introduced a franchise system which allowed Ford dealerships to open around the world.[1]

Ford was also a virulent antisemite, as evidenced by his publication of The International Jew, a series of four pamphlets which reprinted stories that had previously appeared in Ford's newspaper The Dearborn Independent in the early 1920s. 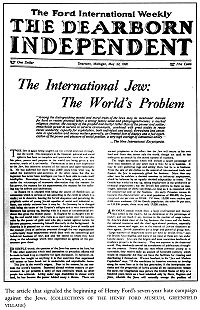 Although Adolf Hitler in Mein Kampf was not inclined to share the spotlight with other people, especially living, non-German ones, he did at one point single out Henry Ford as a person who "still holds out independently" against the International Jewish conspiracy. The use of the word "independent" was no doubt a reference to the Dearborn Independent, Ford's racist rag from which some of Hitler's "reflections" were copied.[2] Hitler also utilised sections of Ford's book, The International Jew (earlier circulated by the Nazis, and translated by them into a dozen languages), verbatim in writing Mein Kampf.[3][4] A portrait of Ford was displayed prominently in Hitler's private office.[5] Ford's funds were used to finance the Beer Hall Putsch, and at the subsequent trial in February 1923 vice president Auer of the Bavarian Diet testified:

In August 1938, Ford received the Grand Cross of the German Eagle, the highest Nazi decoration for distinguished foreigners.[7]

The following is excerpted from a report printed by the United States Senate Committee on the Judiciary in 1974:

Ironically enough, Ford was a Freemason,[9] something which Hitler virulently despised and alleged as being in cahoots with the very same international Jewish conspiracy Ford himself espoused. Being a member of a secretive society and a conspiracy theorist at the same time is a thing to behold.

And now for something completely different[edit]

Perhaps the most vile act of Henry Ford's career was his promotion of square dancing. Ever been forced to do a stupid dance to awful country music while in high school? Henry Ford.[10]

Just praise the FSM that the Macarena hadn't been invented yet...