The WWII alliances (Axis powers in blue).
Note: This article is not about anything related to any coordinate system.

The Axis was a military alliance of mostly far-right dictatorships, who were aligned against the Allied Powers (Great Britain, United States, Soviet Union and so on) during World War II. The alliance grew out of the diplomatic rapprochement between Germany and Italy, with the purpose of securing their military interests. Those two nations would sign a cooperation treaty in October 1936, an event followed shortly by a speech by Italian leader Benito Mussolini proclaiming that they had created a "Rome-Berlin Axis."[1] Less than a month later, Germany and Japan signed the Anti-Comintern Pact, directed at the Soviets. Italy joined shortly thereafter. Military provisions of the alliance were established and formalized in the Pact of Steel on May 22nd, 1939. Finally, the three powers would sign the Tripartite Pact on September 27th, 1940, which would become known as the Axis Alliance.

Their stated goal was to oppose both internationalist capitalist powers (the Allies) and communism (the Comintern).[2] Axis countries generally preferred an authoritarian "state capitalism" which somewhat resembled mercantilism under absolute monarchists. However, the primary practical purpose of the alliance was to overthrow the post-WWI global order and establish new empires through military conquest.[3]

The three main powers in the Axis were:

In addition to the three original signatories to the Tripartite Pact, there were a number of other members in the Axis, which included both independent states and puppet governments. They were:

There were also nations which fought alongside the Axis against common enemies. These nations did not sign the Tripartite Pact and should not be considered part of the Axis.

French volunteers fighting alongside the Axis in Russia.

Several nations, while remaining officially neutral, cooperated with or had friendly relations with one or more Axis alliance members.

Post-War, Portugal became a member of NATO and the UN, while Spain wasn't part of either until 1956 and 1982, respectively. This was likely because Franco, unlike Salazar, had favored the Axis over the Allies during the war. Both men remained in power until the 1970's.

Goals of the Axis alliance[edit] 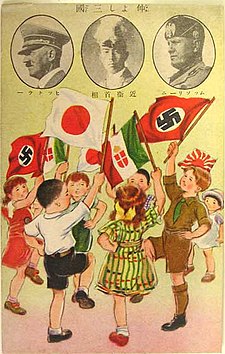 As a military alliance, the Axis functioned as a primarily offensive apparatus; the partnerships between its three main members were intended to enable them to fulfill their military ambitions. Of the three, Germany has had its motives most closely examined. Hitler spent much of the late 1930s reversing the Treaty of Versailles' limitations on German power by annexing Austria and Bohemia-Moravia, and dramatically increasing Germany's military capacity.[13] This reached a climax when Hitler forced a variety of symbolic humiliations on the French following their capitulation.[14] After the fall of France, Hitler's primary goal became the destruction of Soviet communism and the annexation of lands to the east in order to provide lebensraum for the German people.[15] This expansionism was considered vital due to Germany's expanding population; it had to import most of its food, which became a problem during the British blockade in WWI.[16] However, the most infamous motivating factor behind Hitler's wars were the racial policies of the Nazi Party, which emphasized Aryan racial superiority and mandated the extermination of Jews and other undesirables across East and Central Europe.

Benito Mussolini saw the Axis as a path to geopolitical dominance for Italy. After witnessing the hostile yet impotent response from the Western Allies after his invasion of Ethiopia, Mussolini decided they were decaying empires, not worth his time. Cooperating over the Spanish Civil War brought him closer to Hitler's Germany. Italy's goals for expansion consequently shifted.[17] He sought the return of Italian territories sacrificed during the Risorgimento (Nice and Savoie), as well as the conquest of British and French colonies in Africa. This territorial expansion, Mussolini reasoned, would lead to Italian domination of the Mediterranean and the birth of an era of Italian greatness not seen since the Roman Empire.[18] He was a bit too daffy to make it happen.

Japan, which had spent the last decades growing increasingly militaristic and aggressive, was already deeply involved in an invasion of China by the time the war began. Dutch colonies in Asia were rich in oil reserves, which Japan desperately needed to supply its war effort. British and French holdings also had vital resources. It sought to create a Japanese-dominated alliance called the East Asian Co-Prosperity Sphere,[19] where all the Asian people were equal, but the Japanese were a whole lot more equal that everybody else. Japan's imperial ambitions placed it into direct conflict with the old empires of Britain and France, and the rising United States. The last part went poorly for them.

See the main article on this topic: Axis of Evil

George W. Bush attempted to revive the Axis term, in the context of a modern "Axis of Evil," to refer to something other than the Nazi/fascist dictatorships of WWII and to drum up support for war in the Middle East in a Godwin's Law style. This usage is probably on the same level as the neologism "Islamofascism." In other words, bullshit rooted in using moral equivalence as a propaganda tactic. Doctor Evil reportedly rejected the idea, on the grounds that "They're not quite evil enough. They're semi-evil. They're the Diet Coke of evil, just one calorie, not evil enough."