From RationalWiki
(Redirected from Heretics)
Jump to navigation Jump to search

Heresy refers to aberration from a (typically religious) orthodox system of beliefs, while still making a claim to hold said orthodox beliefs. It is distinct from apostasy, renouncing one's religious or political belief system altogether, and schism, rejecting the power and/or legitimacy of the established authorities of the religion, while still accepting the religion's established beliefs.[note 1] Today, the word heterodoxy — a Greek word from which heresy is derived — is the preferred term among people who wish to appear more erudite and/or less provocative.

As demonstrated by St. Irenaeus' five volume Against Heresies (c. 180), nearly any belief can be called heresy, even if it pertains to a very minor point.[1] However, in modern times, use of the actual term "heresy" has developed such a negative connotation (thought control) that it is viewed as easier to use terms like "deviant", "deviates", "blasphemer", or "unbeliever" as stand-ins.[note 2] So Creationists do not call Stephen Jay Gould's theories of a godless universe running on automatic heresy, but by the standards of St. Irenaeus, the concept would certainly qualify — were he a practicing member of the Catholic Church. The key to what makes a heretic, religiously, is that they are advocating a religious doctrine that directly contradicts the teachings of that religion while being a member of it. If you say something which contradicts a religion’s teachings while not being a part of that religion, you aren’t a heretic. This is why most Protestants aren’t considered heretics by the Catholic Church — they were never Catholic to begin with.[note 3]

The term derives from the Greek word airesis, meaning something like "a school of thought", which was used by the Jewish historian Josephus to refer to heterodox Jewish sects such as the Nazarenes, Pharisees, and Saducees. In Acts 24:5, the same word was used by the authorities to refer to the sect led by St Paul of Tarsus.[2] But the punishment of heresy requires an authority capable of enforcing orthodoxy. Hence, while the early Christian church was full of doctrinal differences (over the nature of the Trinity, etc.) and various unorthodox sects such as Gnostics, it was only once Christianity became the official religion of the Roman Empire and gained the powers of the empire that punishing heretics became a thing. Priscillian (died c. 385) is said to be the first heretic following the criminalization of heresy in the Roman Empire: a promoter of extreme asceticism and dualism, he was excommunicated and then executed for sorcery by the authority of Emperor Maximus.[3]

Catharism was one of the best known heretical sects. The Roman Catholic Church established the Inquisition in 1229 to root out the Cathars. After executing the last Cathar in 1321, the Catholic Church continued the Inquisition for several centuries to suppress all perceived heresies. One of the most famous persecutions by the Inquisition occurred in 1633 when Galileo Galilei was found "vehemently suspect" of heresy and forced to recant his claims of heliocentrism (despite the fact that Pope Clement VII tried to encourage Copernicus to publish his heliocentric work in 1536, effectively making heliocentrism rather than geocentrism an orthodox belief).[7] The real reason for Galileo getting into trouble was that he put a favorite concept of the Pope into the mouth of a fool, even though said Pope was a big supporter of his. His insistence that his theory — one which, while eventually proven correct, he lacked the technology to prove at the time — on heliocentrism being accepted to the extent of changing Scripture at a time of massive religious strife was another reason. 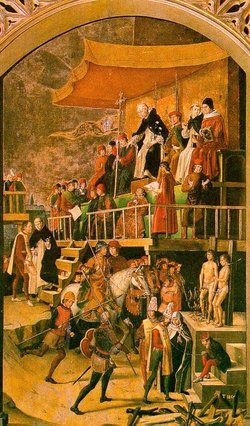 Often, those at the extreme ends of the political spectrum will hurl accusations of RINO or DINO, either because the candidate doesn't toe the party line as the accuser thinks it should be or that they are moderate enough to work with differing opinions in an attempt to govern. There will sometimes only be one detail that makes the candidate a heretic to a person or group, which results in the candidate being expelled from their orthodoxy.[15][16] The "in name only" candidate will often still get the vote if there is no one more orthodox, or if the only other option available is the other party candidate.

Those accusations can be true, as a candidate can be running in a district heavily on the opposite side of the spectrum and would like to gather appeal. Often, these are a minority of those claims. In online political forums, that likelihood reduces to almost zero.

Self-described "third Party" groups like Tea Partiers and Libertarians will often lob names they find pejorative (Nazi, Socialist, Marxist, Statist, Atheist, Muslim, collectivist, etc.) at opponents of their orthodoxy without regard to the actual meaning of the terms. Since many in these groups feel everyone should be like minded to them, because they are the right way, it doesn't matter if the people they are lobbing these insults at even want to be a part of their system of beliefs. These groups also tend to be inherently unstable, as egos fight for control and claim others are heretics to the true orthodoxy under their leadership.