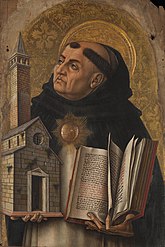 All church and no pray makes Tom a dull boy.

His massive Summa Theologica makes Das Kapital look like light beach reading, and it is renowned as the epitome of Christian theology and philosophy by the Catholic church. Why the essential insight it purportedly provides wasn't included in the holy scripture to begin with remains ignored by sola scriptura believers (e.g. Protestants).[notes 1]

Aquinas endorsed something he called "natural theology" — knowing God by reason apart from but not contrary to divine revelation as opposed to the belief that God can only be known by divine revelation (e.g. exclusively studying the Bible) — an approach he based on earlier work by Jewish and Islamic philosophers Maimonides and Averroes

His philosophical legacy, known as Thomism, shifted medieval philosophy away from Plato and towards the rediscovered works of Aristotle. This was one of the developments which led to the Renaissance, during which many new philosophies developed either from or in opposition to Thomism. Thanks for that, Tom![1]

For all his (relative) logical prowess, he was constrained by the fact that no part of his reasoning could bring him into disagreement with Scripture, and often trumped opposing arguments by simply throwing a quotation from the Bible or one of the Church Fathers at the problem. Unsurprisingly, doing so rarely caused it to go away.

Another early apologist device of his was redefining certain terms by saying "X may be understood in two ways". He then used the less obvious understanding when it suited his cause.

The Summa is his point-by-point summation about who he thought God was and, as such, how the universe worked. His original seed thought, of God as the un-caused Cause, thus explodes into multiple volumes detailing every tenet of faith upheld as dogma since then by the Roman Catholic Church. An introductory text for theology students, it is considered "one of the classics of the history of philosophy and one of the most influential works of Western literature."[2], and is a foundational text for Catholics — and an important text among Anglo-Catholics, some Lutherans who identify as "Evangelical Catholics", and Calvinists.[notes 2]

The Summa was written with a mind both attuned to Scripture and to Aristotelian philosophy; it can be very difficult to understand without first understanding Aristotelian philosophical concepts, such as 'movement', 'potentiality', and 'actuality' (which, incidentally, play a major role in one of Aquinas's arguments for the existence of God).

Aquinas puts forth five arguments that are supposed to, together, prove the existence of God.[3] Richard Swinburne argued that these arguments are only strong when collected together: individually, each of them is weak. Even if one accepts every single one of his premises, they only manage to prove that something resembling a deity exists, as opposed to the specifically Christian God.

The Argument of the Unmoved Mover[edit]

This cosmological argument asserts that God must be the cause of all movement in the Universe. Aquinas contends that an infinite regress of movers is impossible, meaning that there must be an unmoved mover that initiated all motion - and that this mover is called God. One could just as easily call the first mover "Charlie", or any other preferred name, since the argument does not establish that the "unmoved mover" has any of the characteristics that are usually associated with the concept of God, such as consciousness, benevolence, omnipotence, or a proclivity to intervene in our universe. Far from proving that the Christian God exists, the most the argument can do is lend some support to a sort of weak deism, but without even necessitating the continued existence of the "first mover" which could just as easily have been the Big Bang as any preferred deity.

The Argument of the First Cause[edit]

This is practically a paraphrase of the Unmoved Mover argument above: same steps, same order, same leap of logic from common sense to assumptions about the nature of the universe, same special pleading for God. Unlike its predecessor, this argument does not make the questionable assumption that the natural state of things is not motion; however, it still makes the leap of trying to apply the "in-universe" concept of causation to something that is supposed to have existed before the universe began.

This argument for the existence of God is yet another variation on the first two, this time phrased around an explanation of why something exists rather than nothing. According to Aquinas, it is conceivable for the universe not to exist (meaning that it is contingent); thus, it must have a cause for existing. This cause must not be something that is also contingent, but rather some thing whose existence is necessary. And this is what he calls God. This argument suffers from the same issues as the first two arguments in that it simply defines God as the original cause of everything, without any explanation of why this cause should have the attributes of Aquinas' preferred God rather than any other deity (or deities) or the Big Bang.

See the main article on this topic: Transcendental argument for God

Aquinas argues that there must be an ultimate standard of perfection to which everything else can be compared. Therefore, perfection must have a pinnacle, which he calls God. The main problem here is that the existence of a concept of a maximally perfect being does not prove that the being exists for real, any more than the pinnacle of any other positive or negative quality, such as smelliness, proves the existence of a real entity embodying this pinnacle. It's similar to the Ontological argument, and suffers from the same basic flaw that you can't prove something's existence by defining it in a certain way (Aquinas himself rejected the ontological argument, yet it seems he didn't see the issue with his own here).

See the main article on this topic: Argument from design

This argument is based on the premises that unintelligent objects, such as rocks, act towards an end (such as falling to the ground), but that they cannot do so unless they are directed. Aquinas' conclusion was that a single being with intelligence directs everything towards its end, and he called this being God. In addition to the questionable aforementioned premises, this conclusion also rests on the unsupported assumption that each individual object cannot be guided by a unique being. Or gravity, for that matter.

Aquinas attempted to counter several arguments for atheism. The format of this would consist of Aquinas offering a viewpoint that he considered erroneous, and several reasons why that view might be true, and then a rebuttal and his own point of view.

Aquinas dismissed the problem of evil by saying:[4]

This is part of the infinite goodness of God, that he should allow evil to exist, and out of it produce good.

If you're about to protest that infinite goodness, by definition, wouldn't allow evil to exist, you're not alone.

Aquinas rebutted an argument for atheism based on Occam's razor:[5]

Reply to Objection 2. Since nature works for a determinate end under the direction of a higher agent, whatever is done by nature must needs be traced back to God, as to its first cause. So also whatever is done voluntarily must also be traced back to some higher cause other than human reason or will, since these can change or fail; for all things that are changeable and capable of defect must be traced back to an immovable and self-necessary first principle, as was shown in the body of the Article.

Aquinas argued that nature works towards some end, also known as teleology. This would require intelligent design or some other related argument (such as the argument from beauty or argument from design) to be true. It should be borne in mind that this argument was much more compelling before we enjoyed scientific explanations for much of what goes on in the world.

Compelling others to the faith[edit]

Who should we love more[edit]

Summa Theologica is an honest attempt by a pre-modern scientist to explain how the world works. Unavoidably, many of his assumptions are contradicted by modern biology and medicine. Aquinas had no access to the microscope, germ theory, Darwin, or any other tools to serve him in any form that could be called scientific. (However, being monks never hindered William of Ockham or Roger Bacon giving science a method and logical foundation, or Gregor Mendel discovering heredity.)

Aquinas believed honestly that the sperm gamete was the only one required for impregnation to occur in a woman. In his version of reality, there is simply no such thing as the egg cell. In the world of Aquinas, not only are women relegated to strict gender roles — but in terms of who pulls the most weight in making babies happen, women are to be understood as playing the second fiddle. Given the obvious hardships endured by pregnant women on account of carrying a baby to term, this position seems needlessly spiteful. Besides, in his worldview, how are we to explain children who resemble their mother more than their father?

Aquinas formulated the idea of Natural Law, a mainstay of Roman Catholic theology which says the human body should be only used in accordance with the Laws of Nature (as according to Thomas). Obviously we quickly see where this is going. Unlike the Kama Sutra, whose authors knew how to throw a party, for the ever-celibate monk Thomas, everyone on earth is made "naturally" to be drawn to the opposite sex and engage in missionary-style procreation. Female sexuality in a heterosexual sense is missing, and Thomas quickly sends all Sodomites to the Other Place for violating Natural Law.[17]

Of course, to some modern Homo sapiens, this still seems like a perfectly sane way to think reality functions.

The Summa Theologica is an introductory text for theology students and is Aquinas' best known work. It's considered an important work both in Christianity and philosophy in general. It covers many subjects, but is perhaps best known for the five/three reasons which supposedly prove the existence of God (Quinque viae): argument from first cause (phrased in three different ways), the transcendental argument, and the argument from design.

Like King Arthur, he got tripped up a little: