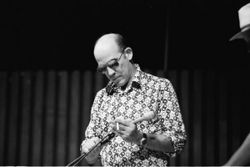 Hunter Stockton Thompson (1937–2005), aside from being someone we all might aspire to be one day, was an American journalist, writer, small-time politician, drug abuser, heavy drinker, chain-smoking, gun-toting explosion-liker and all round nice guy. He quickly rose to fame after writing his seminal work, Hells Angels — A Strange and Terrible Saga, which describes the time he spent riding around with the Hells Angels motorcycle club. He became quite close friends with the Oakland chapter and then Hells Angels big man Sonny Barger. This collaborative friendship came to a grinding halt when the Hells Angels discovered that Thompson did not plan to share any of the book's proceeds with the club (although in a later interview Barger said all Thompson owed them was a keg of beer) and they viciously stomped him, nearly to death. After the Hells Angels episode, Thompson went on to write for Rolling Stone magazine, The San Francisco Chronicle, failed magazine Scanlan's, and wrote several well-regarded books.

He was a Kentuckian, though very few people there will ever admit it. He also voiced skepticism regarding the official story on who was responsible for 9/11, although he admitted he had no way to prove his suspicion.[1]

Hunter Thompson was the original "dirtbag left" (wearing a Che shirt while getting high and shooting at your neighbors with a Luger is in the dirtbags' DNA) and a big McGovern supporter. Fear and Loathing on the Campaign Trail '72 is still depressingly relevant. 'Living the same idiotic nightmare every 8 years with just different names next to the boxes' relevant. Also a ton of schmucks appear in lowly roles who you'll later come to hate, like Sandy Berger and Gary Hart.

In 1970, he ran for Sheriff under a "Freak Power" platform, and pledged to barely enforce the law. His campaign poster was a two thumbed fist holding a peyote button. He also shaved his head and referred to the incumbent as "my long haired opponent" during the election.

It's constantly amazing that so many right-wingers love Thompson. It's because he was a strict civil libertarian and really liked gun rights.

On economic issues, he once called free enterprise "the single greatest evil in the history of human savagery." He was also notedly fond of Karl Marx, whom he once compared to Thomas Jefferson.

Perhaps the most iconic piece of Thompson's work was Fear and Loathing in Las Vegas. This savage journey of drug abuse, decadence and obvious fun defined Thompson for a generation. Thompson's partner on this escapade was his attorney, Oscar Zeta Acosta

(called in the book as Dr. Gonzo, and also known as The Brown Buffalo), a Chicano activist and lawyer. Acosta would later go missing in what some believe was a drug deal gone bad. Thompson wrote an obituary titled "The Banshee Screams for Buffalo Meat."

Until The Rum Diary was published, Fear and Loathing in Las Vegas was Thompson's only declared work of "fiction" as "Only a fool or a linthead would admit to any of the hellbroth of felonies committed in the course of this story." However, after Thompson's death, Jann Wenner, owner of Rolling Stone Magazine, admitted in the Thompson biography Gonzo that 90% of the actions in Fear and Loathing were true to word.

See the main article on this topic: Richard Nixon

Thompson was perhaps best exposed Nixon's utter nastiness to the masses until Nixon dropped trou, released his tapes, and exposed himself to the masses. His book Fear and Loathing on the Campaign Trail '72 covered Nixon's reelection campaign.

3:50 another glass of Chivas, Dunhill

7:05 Woody Creek Tavern for lunch-Heineken, two margaritas, coleslaw, a taco salad, a double order of fried onion rings, carrot cake, ice cream, a bean fritter, Dunhills, another Heineken, cocaine, and for the ride home, a snow cone (a glass of shredded ice over which is poured three or four jig­gers of Chivas)

Hunter's life ended in a manner befitting its content – with a planned gunshot wound from his own hand. His son Juan and grandson Will were in another room while Thompson was on the phone to his wife, Anita. It is thought Thompson shot himself while his son was in the house so he would be found quickly and by those he loved. Thompson wanted to have his ashes blown from a cannon (of sorts), and after his death, friend and actor Johnny Depp (who played him in the film version of Fear and Loathing in Las Vegas, and spent many hours with him in order to develop his role) paid to have a huge tower built, taller than the Statue of Liberty, topped with a two-thumbed fist clutching a peyote button (the "Gonzo Fist," a symbol Thompson used in his campaign for sheriff, and subsequently adopted as his unofficial logo) which exploded his ashes into the atmosphere[4]. Every time you breathe, you breathe in a little Hunter Thompson.