From RationalWiki
(Redirected from Hypnotherapy)
Jump to: navigation, search

Hypnosis is an induced state of trance. It's been defined as a mental state of relaxed consciousness, a splitting of consciousness, a role enactment, a nondeceptive placebo or something else;[1] there is no scientific consensus yet. This means that it can be a bit hard to talk about hypnosis, as it almost has no solid definition. Some people have taken this to mean that they can apply any whack explanations or functions to hypnosis, such as mind control, recovering memories or access to "higher mental states". Hypnosis has been used for all sorts of things, but whether or not it is actually effective at those uses is usually uncertain or even overtly disproven.

Hypnosis has often eluded a clear-cut definition. It's usually defined as a state of consciousness or trance characterized by heightened focus and heightened suggestibility. Some have argued it is a state of relaxation, dissociation, or even that it arises from a subject enacting a role.[2] It's not magic, and it's not mind control. Subjects of hypnosis definitely seem to be experiencing something, but the inner workings of this process are unknown.

Here's the classic setup: hypnosis is typically depicted as two or more people, one being the one doing the hypnotizing (the hypnotist), and the others being the ones getting hypnotized (the hypnotic subjects). The hypnotist may use an object of focus (such as the classic spiral, a swinging pocket watch, the sound of a clock, etc.) and will hypnotize the subject by speaking to them, a process called hypnotic induction. The hypnotic subject is then supposed to show increased relaxation and will show increased suggestibility by following instructions that the hypnotist provides. Hypnosis, in real life, may or may not look anything like this.

Stories of trance states have existed for centuries, but the term "hypnosis" (from the Greek "hypnos" for sleep) was coined in the early 1800s and was popularized by James Braid

. Prior to that, it may have been called "mesmerism" after Franz Mesmer

Hypnotherapy refers to a variety of therapeutic disciplines involving hypnosis. While some forms of hypnotherapy are regulated by professional bodies and qualifications[citation needed], the use of the term "hypnotherapy" itself is not fully regulated. Thus, in many countries, anybody who can hypnotise clients (which is a fairly simple skill to learn) and who claims to offer some form of therapy can concatenate those two words together and call themselves a hypnotherapist. Hypnotherapy is generally considered complementary/alternative therapy and is not widely endorsed by the medical and psychiatric community as a primary therapy. It can also be used successfully as a complement to other forms of therapy as it can make the patient feel more relaxed and open.[6]

This is a form of psychoanalysis using hypnosis in which the client explores their thoughts, emotions, and memories under hypnosis. In many cases, this involves the retrieval of supposedly repressed memories of traumatic experiences, usually from childhood.

Hypnosis may sometimes be used to relieve pain or enable patients to overcome pain — for example, for cancer sufferers. In rarer and more controversial cases, it has been used as an alternative to anaesthesia for surgery.[7] The use of hypnosis during surgery is called hypnosurgery.

This is a form of hypnosis that is allegedly used for retrieving memories. The practice has been criticized for having a false model of how memory works.[8]

Another problem (as with any form of regression therapy) is that the "repressed" memories which come to light may often not be conclusively proven. In some cases, genuine memories are discovered (though hypnotherapy is not necessary for old memories to be rediscovered). In some cases, however, the recovered memories are questionable and may be a creation of the client's own imagination, or confabulations. Sometimes the client may have been guided towards certain kinds of 'memories' by the suggestions of an eager therapist. Controversial cases include clients' claims to have recovered memories of childhood sexual abuse, and these have sometimes been used as testimony in court cases, although their validity as legal evidence remains disputed.[9][10] Many innocent people have been convicted and family relationships have been ruined due to this.[11] 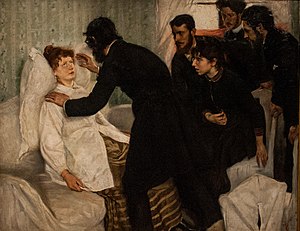 In this dubious 'therapy', clients are also encouraged to retrieve repressed memories while under hypnosis, but the memories are ostensibly from a 'past life'. This may be undertaken on the pseudotherapeutical basis that events in a former life are influencing patterns in the client's current life. Or the client may just be curious about who they were before they were themselves, as it were. Memories of past lives can never be conclusively proven or disproven, and claims made about past life regression rest heavily on clients' convictions that what they have 'remembered' is real. Similar to hypnotic regression that reveals details of alleged alien abductions, these therapies rely heavily on suggestions by the hypnotist, who can prompt the subject. Critics have pointed out how it's interesting that almost everyone who has undergone such therapy turn out to have led interesting lives, often at the sides of famous historical figures, completely ignoring any relatively boring or unglamorous cases where they find themselves dying of plague in a gutter. This may just be a response to the selective reporting of "interesting" regressions, however. In an episode of Penn & Teller: Bullshit! where this sort of hypnotherapy was shown, Penn Jillette thoroughly mocked the bad French accent by a subject who was claiming to be in the court of Marie Antoinette.[12]

You can also find folks who claim you can use it to change anything from hair growth to eye color. This is sometimes called biokinesis. Needless to say, there is absolutely no evidence for any of this.

The Church of Scientology condemns hypnosis publically.[13] L. Ron Hubbard worked as a hypnotist in the '40s and says it inspired some of his work.[citation needed] However, Scientology has often been accused of using hypnosis-like practices, particularly in auditing and with recovered "memories" of trauma.