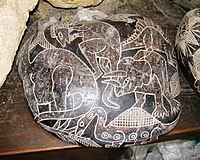 One of the stones showing dinosaurs.

The Ica stones are allegedly ancient artifacts that were "discovered" in Peru in the 1960s. Among other things, they depict dinosaurs, surgery, and modern technology, so they have been used as "evidence" by Young Earth creationists[1] and proponents of the ancient astronauts meme (most notably Erich von Däniken), despite all indications of being a modern forgery.

For example, there are some errors in the anatomy of the Tyrannosaurus rex on the stones: it is shown standing upright, which at the time the stones were found was believed to be how the T. rex walked, but more recent research shows they walked by keeping their spine horizontal.

This pseudoscience-related article is a stub.
You can help RationalWiki by expanding it.
Retrieved from "https://rationalwiki.org/w/index.php?title=Ica_stones&oldid=2400755"
Categories:
Hidden categories: