International Tribunal into Crimes of Church and State 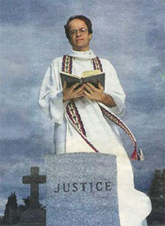 The International Tribunal into Crimes of Church and State or ITCCS (allegedly est. on June 15, 2010)[1] is a one-man blog that pretends to be a tribunal established to enforce common law. Kevin D. Annett (1956–)[2][Note 1] a Canadian, is the founder and operator of a series of crank one-man blogs and phony organisations, the most famous among these being the above mentioned juridical quagmire[Note 2] of nonsense and pseudolaw, the ITCCS. Annett is also a pseudohistorian, an enthusiastic supporter of the freeman on the land movement,[3] a "bankster" and chemtrail truther[4] and a defrocked[5] United Church of Canada

minister, who thinks they're not nearly transphobic enough.[6] He regularly accuses the Vatican, the government of Canada and the United Church of Canada of being worse than Hitler.[6]

Annett has his own page on whale.to[7] and has received support from other freeman[8] and militia movement[9] cranks, as well as David Icke-esque new age cranks.[10] That being said, other conspiracy theorists aren't so enamored of him.[11][12]

Annett has also fraudulently claimed to be a Nobel peace prize nominee,[9] a laughable claim which is completely out of the question.[13] Even so, being nominated doesn't mean squat. Oblivious to all this, some crackpots connected to the militia movement took the time to congratulate Annett on this non-existent Nobel peace prize nomination.[9]

International Tribunal into Crimes of Church and State[edit]

With the ITCCS, Annett attempts to mimic genuine international organisations, and is actually good enough at this to have fooled a few normal people (and a lot of raving conspiracy-prone nutters) into thinking there's anything at all to this. He produces very nicely-formatted, official-looking documents and everything.[15] The website did look fairly professional at one time, although it has since decayed heavily. If nothing else, it nicely illustrates how the Timecube Law and Haig's Law can go hand in hand. Most genuine international legal bodies are not "Proudly powered by WordPress".

The International Tribunal into Crimes of Church and State or ITCCS came to some notice in the social media sphere in February 2013, when Annett issued a claim that Pope Benedict XVI resigned for fear of arrest on an ITCCS warrant[16] and the hard of thinking forwarded it around as if this actually made sense. This stunt made his phony organization notable enough to be debunked on Snopes.[17]

The ITCCS website also sports a prominent link to a so-called "Common Law Community Training Manual", which is basically a Sovereign citizen FAQ.[19] They also have a collection of "Common Law Court Documents", in case you were looking for a pseudolaw starter kit.[20]

Via the ITCCS, Annett has also issued a proclamation dissolving Canada,[21] which he has replaced with the Republic of Kanata. He also dissolved Great Britain, though that one was only on Twitter.[22] This is particularly impressive, as Great Britain is not a country but an island. One wonders how much water was required to dissolve such a large island. Annett claimed to be replacing Great Britain with the "Republic of England", apparently being unaware of the existence of Scotland and Wales.

At the heart of the "organization" is something Annett calls the International Common Law Court of Justice or ICLCJ, which is rather similar to those "common law courts" sometimes set up by freemen on the land, right down to the "citizen jurors".[23] The ICLCJ is supposedly a "a lawful Citizens’ Tribunal of Conscience", whatever that means. This court, however, exists only in the mind of Annett.

Tribunal into Crimes against Humanity[edit]

Never running out of phony names for his non-existent organisations, the Tribunal into Crimes against Humanity or TCH. Annett has accused the Vatican and the British government of trying to block the clearly real and important actions of his Tribunal, stating:

Despite efforts by the British government and the Vatican to obstruct the Tribunals, including by deporting and harassing its leading members, survivors of church and state terror will gather in five countries to present evidence and come to a judgement concerning church-sponsored genocide, murder and the continued trafficking in children. We intend to share this evidence before the world, and bring indictments against the Roman Catholic and numerous Protestant churches, as well as the Crown of England, for mass murder and the continued trafficking and torture of children.[24]

In 2011, the powers that be apparently lost the ability to hold back the tidal wave force of the TCH, which was claimed by Annett to finally have convened in several world capitals globally (including Brussels, London and Ottawa), supposedly present in all these places at once to physically arrest the globalist heads of some vast conspiracy:

After more than a year of preparation, a network of community-based Tribunals into Crimes against Humanity will officially convene in Brussels, London, Ottawa and other cities on September 15, 2011, armed with the power to arrest and sentence guilty offenders – including the Pope himself.[25]

None of these arrests took place or were even attempted — Kevin probably didn't even leave his own basement on that very day. Still, in the same proclamations, he literally goes on to impersonate law enforcement, claiming to have "Common Law Peace Officers" at the standby to enforce his weird rants:

Equally important, the Tribunals will bring common law legal judgements against the guilty persons and institutions, including Pope Joseph Ratzinger, and will impose community sentences against them that will be fully enforced by Common Law Peace Officers.[25]

Unless a massive shoot-out between the common law peace officers and the proper authorities was also covered up internationally and all at once, it's probably safe to assume that nothing ever came of this either. If a global coverup took place, however, this event may be counted among the many freeman successes.

Annett claims (to this day) to have been personally chosen by the native Canadian community to (pseudo)legally represent them, previously also having made his money claiming to represent their interests.[26] Until they told him to damn well stop it.[27]

Before his press releases about arresting popes, Annett was known for making extensive claims of exposing ritual murder of native children in residential schools. He was active in native activist organisations in Canada[28] — which he had a habit of using to raise money for himself, claiming their support and endorsement until forced to desist.[29] Here's a real shocker: this is illegal in Canada.

Annett’s explanation for all this is to claim that all official representatives of native Canadians are corrupt and have agreed to keep the deaths of thousands of children secret.[30]

Despite the attempts to limit his abuse of real topics, he went on to make outright pseudohistorical claims:

Annett has a major beef with Gary Paterson,

the former Moderator of the United Church of Canada, for the simple reason that Paterson was openly gay and not a hateful asshole like Annett. The idea for the church to push forward with gay acceptance and to work against violence against transsexuals was met with disgust by Annett, who wrote:

I learned long ago the pointlessness of arguing morality with a psychopath – one wonders why the collective absurdity calling itself the United Church is lending itself to such increasingly bizarre and membership-shrinking gestures as the latest stunt emanating from the twisted gray matter of Gary Paterson.

It’s one of those compensations of a moral universe that anyone who gets away with a crime eventually goes mad from doing so; and the bigger the atrocity, the crazier they become. Ask Idi Amin, Adolf Hitler, or Joe Stalin.

Unless you’ve been avoiding the internet and television for the past few weeks, you can’t have missed Gary Paterson, the immoderate Moderator of the United (or was that Untied?) Church of Canada, who just announced that all good church members should honor transgender people in a special day of remembrance. Why? Because two such people were killed in Canada last year, ostensibly because of their sexual identity.[31]

In a fit of fake moral outrage, Annett sarcastically commented on the choice of not wishing death to transsexuals when there used to be residential schools that could be discussed instead:

Instead, well, let’s all remember, I don’t know, how about cross dressers?[31]

Truly a beacon of the freemen.[Note 3]