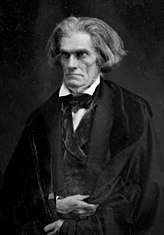 Doc Brown posing as Calhoun in Back to the Future IV Calhoun in his tuberculosis-riddled later years. Also, dig that slaveholder neckbeard (zoom to puke).

John C. Calhoun (1782–1850) was one of the nastier political figures in 19th century United States and could be considered the intellectual great-grandfather of American-styled white supremacy and Southern reactionary politics.[1] He was a strong defender of slavery[note 1] and brought the nation to the brink of civil war due to his nullification doctrine that basically argues that any state can nullify any law it doesn't agree with.[note 2]

Despite all that, he managed to be US Vice President for a time (1825-1832)[note 3] and overall one of the most important Southern leaders during the antebellum era. Famously he was Andrew Jackson's vice president while the two had a falling out during the Nullification Crisis of 1832, leading to the two bitterly hating each other and Jackson claiming on his last day in office that his two main regrets were that he "had been unable to shoot Henry Clay or to hang John C. Calhoun."

He furthermore gets chickenhawk bonus points for virulently supporting the War of 1812 (his political group at that time was called "war-hawks") despite never having served in any military.[note 4] In fact his pro-war stance and support for military buildup initially led to him initially being a Federalist sympathizer before flipping to the anti-Federalist/Democratic Party due to the issue of (you guessed it) slavery. If you needed definitive proof that the US would be better off without the Carolinas, he is it.

Calhoun was fiercely opposed to high protectionist tariffs.[2] He even threatened for his home state of South Carolina to secede over the issue, but Andrew Jackson had none of it.

This politics-related article is a stub.
You can help RationalWiki by expanding it.
Retrieved from "https://rationalwiki.org/w/index.php?title=John_C._Calhoun&oldid=2471564"
Categories:
Hidden categories: