The shill gambit, a type of ad-hominem and poisoning-the-well rhetorical move, occurs when one party dismisses another party's arguments by proclaiming them to be on the payroll of some agency. It usually goes something like this:

The shill gambit works as an attack because a conflict of interest[1] can cause serious problems when addressing scientific/technical issues, where both lives and massive amounts of money can be at stake. In many cases, conflict of interest has caused problems in the past, notably when medical trials go awry because data was covered up to save face and/or money.

Where this gambit becomes fallacious is where such conflict has not been demonstrated. Indeed, when a shill gambit is used fallaciously, the only "evidence" given of such a connection to a big company or government is that someone endorses a particular position — and therefore, they must hold that position only because they're being paid or receiving some other deal-sweetener. Such a move is less fallacious and can even be beneficial when such conflict of interest is demonstrated and shown to interfere with a person's judgment of the evidence.

There is further justification for some paranoia over internet-based shills as there are many online astroturf campaigns. However, such shills tend to spend their time flooding sites like Amazon.com with glowing reviews of their company's product using armies of sock puppets. When shills actually go on message boards, they will seldom engage in debate — instead, they make one or two quick posts or perform a brief back-and-forth with a sock puppet and then leave permanently.

The shill gambit is a more general form of the "pharma shill gambit" coined by Orac of Respectful Insolence.[2] Alties are especially prone to accusing anyone who calls their woo what it is of shilling for Big Pharma — leading many bloggers to say that they wish they were making that much money.

Orac also defined the "reverse pharma shill gambit," which calls the altie on his connection to a company that peddles quackery. (c.f. Big Placebo.) He pulled this gambit himself when he called Age of Autism out for taking money from alt-med woomeister Lee Silsby.[3] A similar situation occurred when people noticed that Andrew Wakefield suffered a major conflict of interest as he was financed by companies that had a lot to gain if the "triple-jab" MMR vaccine was revoked in favor of three separate ones.

See the main article on this topic: Politics 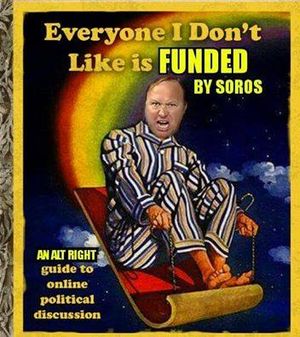 In American politics, right-wingers will often try to discredit liberal groups by showing that they, or someone they work for, are in the pay of George Soros, while left-wingers do the same to right-wing groups by showing that they have at some point received money from some corporation or other; at present (2010s) the Koch brothers are popular "evil capitalist pig" figures for this purpose (Richard Mellon Scaife is so 1990s, and Rupert Murdoch was 2000s news.).

See the main article on this topic: Climate change

Conspiracy theorists also love the shill gambit, though "shill" is often replaced with "operative" or "disinformation agent." This is the driving force behind the parody Bielefeld conspiracy and its many variants. Even when presented with incontrovertible evidence for Bielefeld's existence, the "theorist" can always use the shill gambit to turn the argument in his/her favor. It's not uncommon to find a conspiracy theorist claim to "expose" a popular skeptic/website as a way to come across as a whistleblower.[5][6] This is similar in the vein to other famous whistleblowers like Edward Snowden, but infinitely more credible, as the mainstream media (Read: Shills) doesn't bring any attention to them.

Many leftists who defend authoritarian anti-Western and anti-American regimes portray their critics as warmongers and neocons. Max Blumenthal,

who was once a pretty intelligent progressive, has fallen from grace in the pro-interventionism circles and questioned the scale of Uyghur detention in camps in China's northwestern Xinjiang province and challenged reports of atrocities allegedly committed by the Syrian President Bashar al-Assad. He has appeared on Tucker Carlson's show and multiple foreign state media outlets, including RT, Press TV, Turkey's TRT World, Al Jazeera, Venezuela's Telesur, and China's CGTN. He attempts to cast doubt on those who criticize the authoritarian tendencies of China, Putin's Russia, and others as warmongering neocon shills. This behavior shows that Blumenthal has not only gone full tankie and also employs the shill gambit.[7] Max also blames billionaire George Soros for regime change in Venezuela, Latin America, Nicaragua, and Hong Kong while being interviewed on the Jimmy Dore show.[8]

It's a well-known fact[citation NOT needed] that shills live in Shillington, Pennsylvania.

We found those checks we were waiting on.
Users of RationalWiki are still waiting on their checks from Big [Insert industry here], George Soros, and Correct the Record. Come on, we have servers to run and pool parties to host.