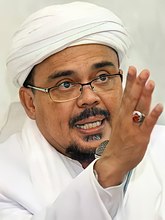 Muhammad Rizieq Shihab, the leader of the FPI.

The Islamic Defenders Front (Front Pembela Islam, الجبهة الدفاعية الإسلامية, FPI) was an Islamist vigilantist organization based in Jakarta, Indonesia. Formed in 1998, FPI's main ideology is a fundamentalist interpretation of the Islamic doctrine "commanding right and forbidding wrong" (amar makruf nahi mungkar), and as a result, they regularly employ violence to enforce their idea. Their "Great Imam" Muhammad Rizieq Shihab is also an ISIS supporter. On 30 December 2020, they were banned by the Indonesian government.

FPI was notorious in Indonesia for its vigilantism during the month of Ramadan when Muslims fast from the sunrise to sunset, as FPI conducts violence, sweeping across the town to crack down on open restaurants, Chinese restaurants etc. which serve pork, or any bars that serve alcohol. FPI also does patrols against nightclubs, brothels, and "hip" places that smell of Western cultural invasion like a billiard cafe. FPI argues that these places are a hotbed of drug trafficking, but this is bullshit as they will let go of these stores if they pay protection money (which therefore makes FPI more akin to organized crime).[2]

FPI also routinely conducts street protests carrying huge Jihadist banners with all-white-dressed guys screaming over loudspeaker-mounted trucks, blocking traffic in one of the world's most congested cities, Jakarta. The subject matter of these protests can vary depending on what's trending, but during 2014-2017 when the governor of Jakarta was an ethnic-Chinese Christian named Basuki Tjahaja Purnama (colloquially called Ahok), they were busy making racist protests against having a non-Muslim as a government leadership role.[3] The protest grew into a massive shitstorm in 2016 during the gubernatorial election season, after Ahok made a gaffe of mentioning the Qur'anic verse during his campaign speech, which was spun into a hoax video which portrayed Ahok as if he is condemning the Qur'an itself. This video spread across social media, creating a huge manufactroversy over his legitimacy as a non-Muslim governor. Eventually, the 2016 November-December demonstrations mobilized over tens of thousands of Islamists and semi-Islamists like a bunch of conservative grandmas joining the bandwagon, demanding for the resignation and blasphemy trial of Ahok. Ahok was eventually sentenced to two years in prison for blasphemy, which disappointed the majority of Indonesians who didn't want anything to do with Islamist agenda.

FPI called for a ban on Playboy magazine when it was first published in 2006, and when the outlet wasn't being responsive, they raided its headquarter in Jakarta. Playboy was forced to relocate to Bali, an island with a Hindu majority, and much more tolerant of sexual issues. The then-centrist government of Susilo Bambang Yudhoyono

in 2010 for violating sexual indecency law. Arnada was later released from prison in 2011 after appealing to the Supreme Court.

FPI also called for a ban on American pop singer Lady Gaga when she planned to do a huge concert in 2012. FPI called Gaga a "devil's messenger" and threatened her for being too naughty over her fashion and all. The Indonesian police, well known for its impotence, echoed FPI's sentiment and asked Gaga to tone down the flamboyance. Gaga rightly became angry over this and canceled the concert. Both the FPI and the Indonesian Minister of Religious Affairs Suryadharma Ali

made the statement that this is good news for Indonesian society.[4]

Who the fuck supports them?[edit]

Indonesia is known for being relatively moderate, and while there is a growing presence of conservatism, the majority of the population is much less conservative compared to other predominantly-Muslim countries.[5] A lot of Indonesians hate FPI, and this is proven time to time: the leaders of the biggest Muslim organization in Indonesia, Nahdlatul Ulama, called to disband FPI in 2015 and 2019.[6][7] The FPI is also banned in several places including the city of Balikpapan in Kalimantan island, where a significant number of populations are ethnic Christian Dayak people.[8] There was also a change.org petition in 2019 signed by 250,000 people to stop the extension of government permit toward FPI.[7]

The FPI was thriving politically and previously held official recognition as a legitimate socio-political organization. This was due to the Indonesian government's support toward FPI: the government, since its democratization in 1998, kept taming FPI as a tool to make a grassroots mobilization and do their dirty laundry (indicating astroturfing), especially in the capital of Jakarta.[2] The Indonesian government historically utilized these violent grassroots to get rid of their political enemies: case in point is Pancasila Youth, an ultra-nationalist paramilitary organization that was partly responsible for the 1965-66 genocide against the Communist Party of Indonesia (PKI).[9][10] The FPI is no exception, with their strong grassroots support among the urban poor and vocal minority of Islamic fundamentalists.

The government has historically provided support toward FPI on numerous occasions: this includes financial support by the former president B. J. Habibie

(2001–2004), military training by the Indonesian Army, as well as patronage by the former-military generals including Wiranto

.[2][11] However, the Indonesian government, led by the current president Joko Widodo

, have distanced themselves from FPI for becoming way too influential and on 30 December 2020, the Indonesian government officially disbanded the FPI and detained Muhammad Rizieq Shihab, who was later jailed, ironically, for disregarding COVID-19 legislation.[12][13]