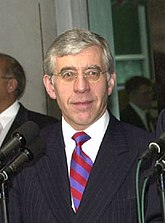 Jack Straw (1946–) is a former British Labour MP. In his time in Parliament he served as Home Secretary, Foreign Secretary and Justice Secretary.

He objects rather strongly to being called a "Trot."[1]

He backed the invasion of Iraq, calling it the "most difficult decision" of his career and admitting that he found the aims of the intervention to be "improper and unlawful."[2]

He is critical of Muslim women wearing the veil, calling it a "visible statement of separation and of difference" and asking "[w]ould those people who do wear the veil think about the implications for community relations?"[3]

He caused further controversy when, following twentysomething males Mohammed Liaqat and Abid Saddique being found guilty of rape, he appeared on the BBC programme Newsnight and alleged that Britain's Pakistani community has a rape problem, particularly with young white girls.[4]