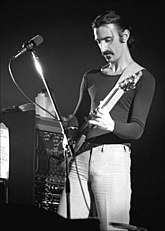 Frank Zappa (December 21, 1940 – December 4, 1993) was a guitarist, composer, independent music producer, and cult figure. Politically, he was an outspoken advocate of freedom of expression, and a vocal opponent of organized religion, fascism, and the PMRC- the latter of which was headed by then-Senator Al Gore's wife, Tipper Gore, at the time.

His lyrics were generally politically incorrect, leading to some of Frank's fans distancing themselves a bit from Frank.[6] Starting with the anti-establishment/anti-war zeitgeist of the 1960s, the message of his music changed over time, criticizing the United States government, religious conservatism, and televangelists. His lyrics were generally more biting and offensive to people than his interviews (which were also politically incorrect). and Frank generally evaded questions about lyric content, stating he thinks his lyrics contain valid criticisms or mockery of groups of people.

The Anti-Defamation League asked Frank to apologize for his song Jewish Princess, due to its content listing out various stereotypes of Jewish women, and Frank refused.[7]

He was also accused of being homophobic because of the songs He's so gay and Broken hearts are for assholes (among several others), however, Frank categorically denied this.

Criticism of the Women's liberation movement and accusations of misogyny[edit]

Frank was a self-described "sexual libertarian",[8] shyed away from calling himself anti-feminist,[9] and he was also opposed to full-throated support of what was called, "women's liberation", in the second half of the 20th century. He seems to state he thought women were already liberated, and that the only women who needed liberation were the more old-fashioned ones.[10]

That being said, he has also stated he thought the women's liberation movement was not ultimately bad, but just inconsequential and a temporary hobby for women, as well as his opposition to traditional gender roles.

Furthermore, perhaps one of the most uncharitable of his more questionable views is his apparent belief that most women are stupid people.[11][12]

There was not much public outrage over Frank's music at the time, as Frank had the most radio airplay in countries that did not speak English. For example, "Bobby Brown". became a hit in 1980s Finland, with people considering it a love song, due to not understanding the English lyrics.

Zappa did not state or imply high regard for any political party, but stated admiration for then New York Democratic governor Mario Cuomo multiple times, as well as 1988 Republican Party primary contender Pete du Pont around the time of the 1988 US party political primaries.[14] Richard Nixon and Ronald Reagan were favorite political targets of Frank. Two live albums, Broadway the Hard Way and Frank Zappa in New York, are good showcases of his politically-informed songs. His snark was not restricted to Republicans; Democrats like Jesse Jackson were also targets. That most of his political music criticized Republicans is more evident of the party's political dominance of the 1960s, 70s and 80s than any personal political convictions (he considered running for president in the 1980s)—the cause he championed was democracy.

Zappa described himself as a "practical conservative", who mostly leaned libertarian.[15] He had a few non-libertarian stances, one of which was his strong desire to, "tax the churches".[16] He was also not known to self-identify as a libertarian, and was a registered Democrat.[17] A delegate from the Libertarian Party once tried to convince Zappa to run for president as a Libertarian, to which Frank declined, arguing that the party platform's Randite wet-dreams were "either wrong or stupid".[18]

Zappa was also a notable example of an artist who desired to be judged on his works, rather than on image or categorization. He never made any Sexiest Man Alive rankings, except maybe his own.

See the main article on this topic: Christian right

Zappa was an outspoken opponent of the Christian Right from the outset, and in songs such as "Heavenly Bank Account" Zappa advocated removing the tax-exempt status from all religious organizations, regardless of politics. He was also contemptuous of the fundamentalists' hypocrisy, as demonstrated in his song Jesus Thinks You're A Jerk (1988):[19]

That being said, Frank also expressed explicit admiration of spirituality without religion.[citation needed]

Apart from the controversial nature of the lyrics, his compositions are extremely cerebral and often use alternate, changing, or otherwise overlapping time signatures, as well as strange chord progressions and unorthodox musical techniques. A throng of musicians toured and recorded with Zappa throughout his career, many of them making big names for themselves in the process for having been "schooled" in Zappa's style of musical adeptness. Among these were include Steve Vai, Terry Bozzio, and Mike Keneally. Bands or individuals citing Zappa's influence or admiration for his work include the funk-bluegrass-metal-experimental band Primus,[note 1] liberal documentarian Michael Moore, pop musician Kate Bush, the creator of the Simpsons Matt Groening, and the comedian Bill Hader.

See the main article on this topic: PMRC

Zappa testified before the U.S. Senate in a 1985 hearing about his concerns regarding the potential risks of having a mandatory "explicit lyrics" warning label on records and tapes, as it would establish a dangerous precedent in violation of the First Amendment. As such, he was an outspoken critic of the PMRC, and any other legislation that resembled it.[20][21] Eventually the RIAA agreed to voluntarily place the warning labels on records, thus preventing the need for any government regulations, but Zappa was not a fan of this either, believing it to be just as bad. For a while in the 1980s and 90s, tapes and CDs featuring Zappa's music lacked the warning label. Interestingly enough, Zappa's 1986 album 'Jazz From Hell' is the only instrumental album since the hearings to carry the RIAA Parental Advisory sticker, due to some stores (allegedly Fred Meyer) objecting to some of the song titles:[22]

The PMRC proposal is an ill-conceived piece of nonsense which fails to deliver any real benefits to children, infringes the civil liberties of people who are not children, and promises to keep the courts busy for years dealing with the interpretational and enforcemental problems inherent in the proposal's design. It is my understanding that, in law, First Amendment issues are decided with a preference for the least restrictive alternative. In this context, the PMRC's demands are the equivalent of treating dandruff by decapitation … The establishment of a rating system, voluntary or otherwise, opens the door to an endless parade of moral quality control programs based on things certain Christians do not like. What if the next bunch of Washington wives demands a large yellow "J" on all material written or performed by Jews, in order to save helpless children from exposure to concealed Zionist doctrine?

Zappa passed away on 14 December 1993 from prostate cancer. In 2016, Zappa's children had very public fights over inheritance and licensing issues surrounding his former property not long after their mother, Gail Zappa died.[23] This feud was reconciled two years later, due to holding private meetings reconciled their issues.[24] In the late 2010s[When?], Lady Gaga purchased Zappa's studio and surrounding house.