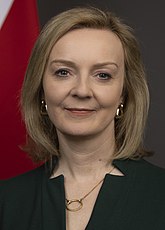 Her politics has shown a steady rightward trend, from the Liberal Democrats, republicanism, and drug policy reform in her youth, through support for the European Union, to current right-wing positions under Theresa May and Boris Johnson and later as Prime Minister. As a result she has become known for her frequent U-Turns, so much so that she has been nicknamed "la Girouette de fer" (the Iron Weathervane) by the French media [2] Like Conservapedia, she has a name you can Truss.

Truss began her political career as something of a centre-left firebrand. Her parents were on the left, in particular her mother, who was a prominent member of the Campaign for Nuclear Disarmament; her father was a mathematics professor who has been described by The Guardian as "left-leaning". Truss was born in Oxford, and also spent part of her childhood in Paisley, Scotland, and Leeds, England. In Leeds she attended Roundhay secondary school, which she has attempted to portray as a tough, inner-city school, but was actually in a leafy, Conservative-voting suburb.[3]

She attended Oxford University, and was active in student politics in the Liberal Democrats, where she spoke out in favour of the abolition of the monarchy — something that would prove problematic when Queen Elizabeth II died a couple of days into her premiership. At the same time, she advocated for cannabis legalisation. She also showed an interest in the classical liberal economist Friedrich Hayek, who would perhaps remain a more lasting influence.[3]

However, she joined the Conservatives in 1996. In 2000 she married Hugh O'Leary, an accountant whom she had met at a Conservative Party event; their marriage would survive an 18-month affair she had with party worker Mark Field.[3]

She unsuccessfully contested a solidly Labour seat in Yorkshire in 2001, and after a hunt for a better seat, was elected for South West Norfolk in 2010.[3]

She started out as an economic right-winger, calling for low taxes and deregulation as founder of the Free Enterprise Group of MPs. She also co-wrote a pamphlet Britannia Unchained which blamed Britain's economic failures on workers being too lazy.[3]

She held a junior role in the education department, and became environment secretary in 2014.

She argued for Remain in the Brexit referendum, but later did a U-turn to become a firm advocate of Europe getting to fuck.[2]

She was briefly Justice Secretary under Theresa May. There she was criticised for failing to defend the political independence of the judiciary after the Daily Mail called them "Enemies of the People" for upholding the law about Brexit.[4]

She then was moved to chief secretary to the Treasury (a junior role to the Chancellor of the Exchequer), which was seen as a demotion for her failings at the Justice department.[3]

Truss supported Boris Johnson's leadership bid in 2019, and became international trade secretary and then foreign secretary, where she had to deal with the debate over the post-Brexit status of Northern Ireland, and the war in Ukraine.[3] As international trade secretary she advocated for a reduction on tariffs on foreign steel imports, which would have damaged what remains of Britain's steel industry, but she was overruled.[2]

The Conservative Party leadership selection process has two parts. Firstly MPs vote in a series of rounds of voting to eliminate all but the last two, then the last two go to a ballot of party members. In the latter, she beat Rishi Sunak by 81,326 votes to 60,339.[1] For reference, the UK had a total population of 67 million in 2020, with somewhere around 46-48 million eligible voters, so Truss was elected with less than 0.2% of the electorate.

Truss responded to rising fuel costs with a massive program of public sector borrowing to fund a subsidy of fuel prices, without trying to raise any additional money from a tax on energy companies and leaving it to the national debt and ultimately taxpayers to pick up all the bill.[5]

The massive borrowing plan was followed two weeks later by a plan to ward off a recession with massive tax cuts (primarily for the wealthy) funded by government borrowing.[6] British financial markets responded immediately and extremely negatively to the supply-side economics[7] scheme: the British Pound dropped to a 37-year low, government bond rates rose (making borrowing more expensive), and the London Stock Exchange fell.[6][8] The plan received a denunciation from the International Monetary Fund, who called on the government to re-evaluate.[9] The widespread negative reaction of markets caused the Bank of England to take the unusual step of announcing that it would temporarily buy unlimited amounts of government bonds in order to stabilize the market.[10] Who would have thought that someone would so quickly show that Boris Johnson was actually an icon of stability?

As PM Truss employed a number of figures linked to various secretive and extreme neoliberal think tanks and lobby groups, adding to her long-term relationship with the Institute of Economic Affairs.[11] Her senior special adviser Ruth Porter worked for the IEA and Policy Exchange (which received money from Exxon and called for new laws against Extinction Rebellion). Her chief economic adviser Matthew Sinclair and interim press secretary Alex Wild were both employed at the TaxPayers' Alliance. Her political secretary, Sophie Jarvis, was head of government affairs at the Adam Smith Institute (another extreme neoliberal, minarchist organisation).[12]

One of the first problems as PM was the rising cost of gas (due in large part to the war in Ukraine and disputes with Russia). Rather than respond in an environmentally friendly way (encourage fuel efficiency by funding home insulation, support green energy, transition away from gas), she proposed a series of measures to increase reliance on fossil fuels. She ended a moratorium on fracking and called for more gas and oil exploration in the North Sea, and the green levy (a tax on fuel bills which funds alternative energy) was suspended.[5] Explaining this behavior, after graduating from university, she worked as an industrial economist for four years for energy conglomerate Shell plc, a company well known for greenwashing.

She has shown herself slightly less crazy on human rights than some Conservatives, shelving Boris Johnson-era plans to abolish the Human Rights Act. Although even this may not have been entirely liberal, as there was widespread concern in the Tories over Labour MP's Stella Creasy's idea to introduce an amendment to the Tory bill that would create a constitutional right to abortion. Clearly that had to be stopped. And there were also fears that if they had a Tory Bill of Rights, they would no longer be able to blame Labour's Human Rights Act if courts ruled against them.[13]

While foreign secretary, she failed to raise human rights issues with other governments, such as Saudi Arabia and the other Gulf states: when asked by Labour MP Chris Bryant to name one time she had raised human rights with a Middle-Eastern leader she was unable to answer.[14]

However, while foreign secretary she was credited with getting British citizen Nazanin Zaghari-Ratcliffe out of an Iranian jail, even if she failed to impose sanctions on the people responsible. So that's one person she helped.[15]

The Russian invasion of Ukraine proved a good opportunity for her to get her war on, and she was a keen supporter of Ukraine.[16]