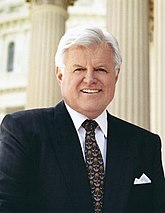 Edward Moore "Ted" Kennedy was a member of the United States Democratic Party and at the time of his death the senior Senator from Massachusetts. He was the youngest Kennedy brother, after Joseph Kennedy Jr., John F. Kennedy and Robert F. Kennedy, and had done extensive political work since the 1960s, taking staunch liberal stances on a variety of topics and endorsing several Democratic presidential hopefuls.

Kennedy was first elected to the Senate in 1964 and due to his popularity was re-elected in every subsequent Senate election, the most recent being the 2006 Senate election. He had served on several committees during his career, including the Committee on Armed Services, the Committee on the Judiciary and the Committee on Health, Education, Labor and Pensions, of which he was chairman. Though a popular Senator, Kennedy did not run for president until the 1980 Presidential Race, where he ran against then-president Jimmy Carter. He took 10 states during the primaries, but ultimately lost. He never ran for president again, but endorsed several Democratic candidates in the past elections. Kennedy's bid against incumbent president Carter is considered one of the factors causing the President to lose re-election, as a result of a divide in the party.

Kennedy was by far one of the most popular senators at the time of his death, being the, then, second-longest serving senator (behind Robert Byrd) within the U.S. Senate and having been placed on Time Magazine's list of "America's 10 Best Senators" in April 2006. Such was his influence and popularity, that Democratic candidates for the presidency consider his endorsement to be extremely valuable. The list of Senator Kennedy's endorsed candidates from the 1988 Presidential Election are as follows:

Kennedy was one of the loudest liberal voices in the U.S. Senate. He was an advocate for things like abortion rights, disability rights, gay marriage, Single-Payer Healthcare, and tighter gun control, and a critic of the Iraq War, George W. Bush's domestic spying programs and the troop escalation surge in Iraq in 2007. In 1987 Kennedy helped to "Bork" ultra-right wing judge Robert Bork. He delivered these memorable lines during the hearings:

“Robert Bork’s America is a land in which women would be forced into back-alley abortions, blacks would sit at segregated lunch counters, rogue police could break down citizens’ doors in midnight raids, and schoolchildren could not be taught about evolution, writers and artists could be censored at the whim of government, and the doors of the federal courts would be shut on the fingers of millions of Americans.”

On July 18, 1969, Kennedy was driving a former RFK campaign worker, Mary Jo Kopechne, back to her hotel from a party on Chappaquiddick Island off the coast of Massachusetts. A wrong turn caused Kennedy to turn onto a railguard-less bridge and swerve into a pond. Kennedy survived but Kopechne died, and the event continued to haunt him (and caused him to lose in the 1980 presidential primary — oh and the Kopechne family was somewhat affected too, albeit not politically) as the "Chappaquiddick Incident". Much of the scandal revolved around Kennedy's delay in reporting the event to the police until the next morning when he was caught.

Unlike his older brothers Joseph, John and Robert, who met the Reaper before their times, Ted survived being at Death's door on many occasions. In 1964, he survived a plane crash with severe back injury, broken ribs, a punctured lung and internal bleeding. This incident was the cause of the senator's health problems late in life, as he has suffered from chronic pain ever since then.

In October 2007 Kennedy had surgery to unclog a blocked carotid artery.

On May 17, 2008, he was taken to Cape Cod Hospital and then Massachusetts General via helicopter after complaining about feeling ill, where it was found that the senator had symptoms of a stroke, after he had suffered two seizures earlier.

On May 20, 2008, he was diagnosed with a malignant glioma (a type of cancerous brain tumor). Yet he felt good and was even better when the tumor was removed on June 2. He underwent radiation treatment and chemotherapy before being released on June 9. He returned to good health at the time.

On January 20, 2009, Kennedy was taken ill during the Inaugural Lunch, which seemed reminiscent of his stroke episode. It was determined to be due to fatigue, however.

Kennedy passed away on August 25, 2009 as a result of the aforementioned brain tumors. He was laid to rest in Arlington Cemetery near the graves of his brothers John and Robert.