From RationalWiki
Jump to navigation Jump to search
Not to be confused with the alternative medicine "Water Cure." 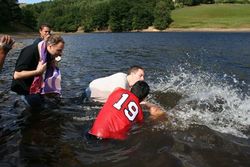 One form of waterboarding that's not only legal, but actively encouraged in some circles.

Waterboarding, formerly known as the "water cure" or "Chinese water torture", is a term used to whitewash a method of torture whereby a person is subjected to the sensation of drowning. Although undeniably — at least by those who have experienced it[1] — a form of torture and a war crime, it's recently claimed not to be in order to legalize it, or at least make the public believe it to be less than brutal. After all, "torture" is only something bad people do.

The "procedure" involves strapping a victim down, and either covering their head with plastic, be it cling-film or plastic bag, or by stuffing a cloth into their mouth. Then the victim is tilted so their head is lower than their body. Water is then poured slowly and steadily over the victim's face and head. As the victim cannot speak while being waterboarded, they are generally given a dead man's drop (A small weight of some sort, which they hold in one or both hands), which they will release when they are ready to co-operate and give up information. The experience of the inability to breathe combined with water flooding the throat and nasal cavities is similar to the experience of drowning, and pretty much sucks. If done too incorrectly or for too long, waterboarding can result in drowning and death, blocked air passages, choking on vomit or a heart attack. 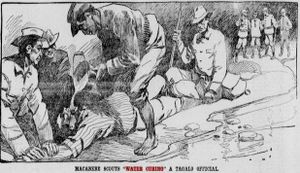 Waterboarding is not a new technique.

Waterboarding has been documented since at least the Spanish Inquisition,[3] and drowning, because of the intense fear it provokes in the victim, has been a popular torture method ever since. Waterboarding is seen as a better tactic than most other forms of torture (read: beating the shit out of people) because if done correctly, it causes no immediate physical harm. This makes it easier to cover up, and allows it to be used far more often, as the subject does not have to heal between sessions. As there are no physical marks left on the subject, waterboarding can be easily denied after the interrogee's release.

After World War II, the United States tried, convicted, and executed Japanese soldiers for waterboarding American POWs.[4] It was also used by both sides during the Vietnam War[5] and the British during The Troubles.[6] Much of the American experience is based on these two scenarios. During the Vietnam War, "high risk of capture" personnel (special forces and aviators) were trained to resist waterboarding, among other forms of torture, at the hands of potential captors. Waterboarding was chosen for this training because it was a type of torture that would not kill or permanently injure those being trained, an outcome that would have made the training rather pointless. The British refined the technique during The Troubles, a period of unofficial armed conflict with the IRA. The British wanted a way to extract information from captured IRA operatives, without giving the IRA a rallying cry. It is worth noting that the British abandoned the tactic fairly quickly. There were also sporadic uses of waterboarding by American police in the 20th century, which sometimes led to felony convictions of the police officers involved.

After 9/11, the U.S. government under George W. Bush routinely engaged in (and apparently still did under the Obama administration) questionable practices such as suspension of habeas corpus, extrajudicial imprisonment, and torture.

The truly sad part is that there was no debate at all when it came to torture, a method of interrogation that experts agree is not useful, and which violates every formal or informal understanding of human rights.

Furthermore it gives the opposing side an argument (if only on a tit-for-tat basis) to use waterboarding in return, thus exposing American soldiers to torture.

, refused to define waterboarding as torture. Ironically (or perhaps not), when asked if it would be torture if "done to him," Mukasey responded, "I would feel that it was."[7]

See the main article on this topic: Torture

Given that Khalid Shaikh Mohammed was subjected to the procedure 183 times,[8] there would seem to be some doubt about its effectiveness — as it presumably didn't work the first 182 times. However, the actual number of times that he was waterboarded depends on how you define the procedure — although he had water poured up his nose 183 times while he was tied down, Fox News maintained that he was only tied down five times while he had water poured up his nose 183 times.[9] So that's all right then, as it's only five examples of torture, rather than two hundred. Though, in this case, it's admittedly hard to feel terribly sorry for the mastermind behind 9/11, if nothing else it would seem obvious that waterboarding would be stooping to the level of almost everything they claimed to be fighting.

Jesse Ventura, the former governor of Minnesota and a former Navy Seal who was actually waterboarded as part of his military training, said that:

In a lot of words, torture in general is a highly unreliable method of intelligence gathering — that so many people in the past had admitted to being witches under torture should set off alarm bells there. It assumes that previous intelligence is correct, and even if it is, subjects can be easily driven to give up false information, or admit to things which they were not involved in. If the wrong person is captured, or the previous intelligence is incorrect, this not only leads to false imprisonment, but allows the real responsible parties to get away. Often, captured subjects know far less than the interrogator would like, but will fabricate intelligence in order to stop the torture. Again, this is actually harmful to the interrogator's cause, as it leads to wild goose chases, wasting valuable time and resources. These are not considered problems for totalitarian regimes, for whom torture is primarily used to extract confessions from political enemies with the truthfulness of the confession being irrelevant, but as a legitimate intelligence-gathering method it clearly falls short. The fucking Qin Dynasty figured out that torture only works in specific circumstances—when someone has been full of shit all along and shows no sign of letting up on their bullshitting—and despite their claims that the Qin rulers killed three generations of a family for jaywalking, the subsequent Han Dynasty seems to have taken their cue from the Qin.

While it is true that some intelligence can be gleaned through torture, it is almost always of no consequence, outdated, or misleading. John McCain, for example, gave up the names of his squad, a tidbit of intelligence that had no bearing on any future operations. Khalid Sheikh Mohammed likewise "confessed" to numerous plots while being tortured, including plans to attack Sears Tower, Big Ben, and other landmarks, and assassination plots on Pope John Paul II, Pervez Musharraf and Bill Clinton; all of these were later proven to be fabrications, designed to stop the torture. Lastly, IRA operatives were even known to use this fabricated intelligence to lead the British into traps.

With the numerous other methods of intelligence gathering (payoffs and bribes, SIGINT, infiltration, negotiation, aerial reconnaissance, covert operations, and so forth), torture is not a valid tactic. It is one generally employed only by a desperately poor force, or by sadists and sociopaths.

Waterboarding demonstration at a 2008 protest against Condoleezza Rice in Iceland