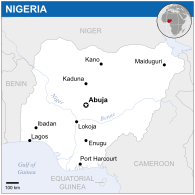 The Federal Republic of Nigeria is a country in western Africa cobbled together by the British from various societies with different languages, cultures, and religions, broadly split between the Christian south and Muslim north. It is the most populous country in Africa and, as of 2015, had the 20th largest economy in the world.[2] Since its independence from the British Empire in 1960, it has seen several military coups and a bloody civil war in its province of Biafra; more recently, Islamist insurgents have been performing atrocities, especially in the north.

Currently, it is ruled by Muhammadu Buhari, a military strongman who claims to be opposing corruption and Islamist terrorism despite a long history of corruption, authoritarianism, and support for Sharia law.[3][4]

There is evidence of civilizations going back to 800 BCE. By the 11th century CE, modern-day Nigeria was divided between several kingdoms, with Hausa and Borno states in the north and Oyo and Benin in the south. Portuguese explorers reached Nigeria around 1472, and the region was badly affected by the Atlantic slave trade, particularly the southeast. In 1809 the Islamic Sokoto caliphate was founded in the country's north. The British established a colony in the 1850s, initially around Lagos, later taking over Germany's colony Kamerun (Cameroon).[5]

Nigeria was created by the British from various groups with different histories, religions, languages, and traditional forms of government. In the north, the Hausa and Fulani lived in Islamic feudal or autocratic states; the British relied on the local leaders to impose control and, in return for their loyalty, did not allow Christian missionaries in. The Christian Yoruba had traditionally enjoyed more benign and less authoritarian monarchies in the southwest. The Igbo, who lived in the southeast, were mainly Christian but lived in democratic, autonomous groups. 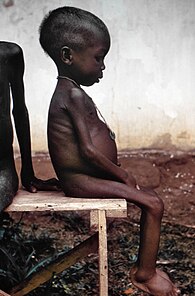 Starving child during the civil war.

The Biafran war, sometimes called the Nigerian civil war, was fought between 1967 and 1970 when the southeastern province of Biafra, with its largely Igbo population, attempted to secede. In January 1966, there was an attempted military coup against the Nigerian government. Many (particularly the northerners) blamed this on the Igbo, even though most of the plotters were Hausa-Fulani. After crushing the coup attempt, General Aguyi-Ironsi came to power and suspended most democratic institutions; the new military government vacillated between proposals for a more federal Nigeria and more centralized authority. Large numbers of Igbo lived in the north, and they faced pogroms and persecution, with approximately 100,000 killed and 1-2 million forced to flee to the southeast. Colonel Odumegwu Ojukwu, governor of the eastern provinces, declared Biafra independent on 30 May 1967.[6]

Biafra is also the region of Nigeria with most of the oil. When the Biafran government tried to collect revenues from the oil companies, the Nigerian government blockaded Biafra. Britain wanted access to the oil, so it armed the Nigerian government while the French secretly supplied arms to the Biafrans. Similar geopolitical and economic concerns guided other interventions: the USSR and Israel supported Nigeria with equipment, while the USA remained neutral, although Nixon privately supported Biafra. Nigerian armed forces invaded Biafra on 6 July 1967. While the Biafran armed forces had some initial successes, Nigeria soon captured major oil installations on Bonny Island and Port Harcourt. Meanwhile, in Biafra, there were massacres of non-Igbo minorities by the Igbo and massacres of the Igbo by advancing Nigerian forces.[6][7]

By 1968 the war had turned into a stalemate, with Nigeria blockading the Biafrans: the result was famine and a humanitarian catastrophe with at least one million deaths (some sources say more than two million deaths) from starvation despite an international relief effort — one of the first famines to be widely covered by television with resultant humanitarian aid efforts. But with Britain supplying far more weapons than anyone else and Biafra starving, the outcome was inevitable. In late 1969 Nigeria launched another offensive, and Biafra formally surrendered on 14 January 1970.

Accurate estimates of the number killed are hard to make due to poor records and suspicions about the census results before and after; it is also hard to tell who was killed in the fighting and who died from famine or disease. Hence suggested figures range from 500,000 to six million.[7]

Despite the horrors of the war, support for Biafran independence has grown again in the late 2010s, although their complaints about lack of economic development are hardly unique to the southeast.[8]

See the main article on this topic: Boko Haram

The terrorist Islamist group Boko Haram has been active in Nigeria, most notoriously committing the 2014 Chibok schoolgirls kidnapping,

when 276 female schoolchildren were kidnapped; while some were rescued, some were imprisoned for years and forced into marriage, and many remain unrecovered. 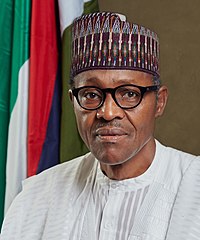 Nigeria is a federal republic with a presidential system of government and a bicameral parliament, influenced by both the American and British (Westminster) systems. However, corruption is a serious problem: it rates 144th out of 180 nations in Transparency International's ratings (where 1 is the least corrupt, Denmark), with a score of 27/100 (0=highly corrupt, 100=very clean).[9]

Muhammadu Buhari is the current president, elected in 2015. His symbol is the broom he waves around at political rallies to symbolize his intentions to sweep away the old.[3] Despite this "new broom" image, Buhari is a former military officer and was head of state from 1983 to 85 in the military government, which took power in a 1983 military coup. This earlier period was marked by grave human rights abuses, with arbitrary detention and suppression of freedom of speech; draconian actions included the jailing of musician/political activist Fela Kuti in 1984 on trumped-up charges. But Buhari's martinet tendencies extended to the comical: "tardy civil servants had to perform frog jumps in public."[3] Buhari promised elections in 1985 but was overthrown in a coup before he could deliver; his defenders say this coup was by army officers upset at possibly losing power. Earlier, Buhari had served as Federal Commissioner for Petroleum and Natural Resources, facing accusations of corruption.[4]

Before the 2015 presidential election, the incumbent Goodluck Jonathan attempted to have Buhari disqualified for standing — Nigeria has an educational qualification for the presidency for which Buhari had no evidence. He stood anyway as a candidate for the All Progressives Congress, which has center-left economic policies but is strongly nationalist. Buhari promised to come down hard on corruption and Boko Haram while also more quietly promising to pardon all previous corrupt leaders. Buhari is a Muslim from a Fulani family and had previously spoken in favor of Sharia law. But in 2015, he declared his support for freedom of religion. After his victory, Buhari completed the first peaceful transfer of power in Nigeria. When his wife criticized his advisers, he told her to get back in the kitchen, to much consternation.

He was re-elected in 2019.[3] This is despite rumors about his ill-health and claims he had been replaced by a double.[3]