Tradition is continuing to do that which has always been done, because it has always been done. This can form a sense of continuity with the past and one's community, which is nice, but it can also get in the way of doing what is necessary or useful. "We've always done it this way." is a powerful force of irrationality that holds back progress in many areas. Joseph Lister's pioneering work on antisepsis saved many lives, but would have saved more if the medical profession hadn't clung so tightly to their traditions of having blood from their various patients on their hands to show that they'd been doing their job — thus cross-contaminating every patient they operated on. China became the first country to have entrance examinations for its civil service — a good idea at first, but the exam never changed, and promotion could be gained by parroting the correct (and, eventually, centuries out of date) answer. Most religions thrive on tradition as an aspect of comfort, a mark of identity, and a measure of control. 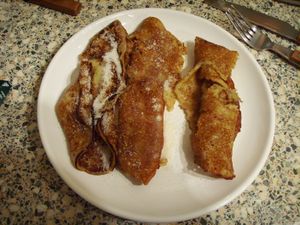 In Brazil they have carnivals. In England we have... these.

Today's traditions are no better. Take the day this article was created for instance. The 24th of February was Shrove Tuesday (Mardi Gras) in 2009. On this, millions of Christians celebrate the day before Lent by having a big party. Even non-Christians "celebrate" this day, often by eating pancakes (crepes) — piles of fried flour with sugar and lemon on them. Some even go out and buy the bloody things, thus going against the whole point, which was to use up perishables before the forty days of going without. That's tradition for you. A great servant but a terrible master.

The Internet is beginning to show the wealth and weakness of "tradition" by highlighting both individual traditions against other people's traditions ("Wait, you get money in your Free Parking?") as well as creating traditions of its own.

Many "traditions" date only from the 19th century; they are either inventions, or attempts at re-creation of historical traditions that fell into disuse or were imported from other countries (e.g. the Christmas tree,

a German tradition which became popular in the 18th century and spread abroad in the 19th century). Romanticist writers such as Walter Scott in particular deserves a lot of blame, with his historical novels, such as Ivanhoe and Rob Roy, created such traditionally stereotypical image as the 'knight in shining armour' and the romantic Scottish bandit, while the modern Scottish kilt was a product of a Lancashireman tailoring a smaller, more convenient garment

for Scottish workers who, after the defeat of the Jacobites, provided raw materials for English industries.

The idea that tradition is an invention of nation-states in order to foster the notion that nations are and have been homogeneous is the fault of that eternal rabble-rouser of British Marxism, Eric Hobsbawm.