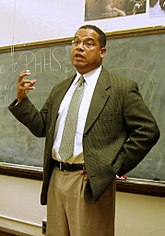 Ellison on the campaign trail in 2006.

Keith Ellison (1963–) is the Attorney General of Minnesota and a former Democratic representative from the same state, but is better known as a Muslim terrorist the first Muslim elected to Congress. In response to those howling how our Founding Fathers would be apoplectic at a Muslim in Congress, he took his oath of office using a Qur'an owned by Thomas Jefferson.

As a young man he was a Louis Farrakhan sympathizer, but has greatly moderated his views since that time; of course, his opponents take great care to make a lot of noise about the former and not to mention the latter. According to former Fox News talk show host Glenn Beck, Keith Ellison shouldn't be trusted because all Muslims are terrorists.[1] Despite what his holy books say, Ellison is strongly in favor of LGBT rights.[2]

In 2016 Ellison, along with Hillary Clinton intimate adviser Huma Abedin appeared in an Islamic State hit list for the crime of apostasy to (their variant of) Islam.

After the 2016 election debacle, Keith Ellison launched a campaign to become the new Chairman of the Democratic National Committee.[3]

He lost, in no small part due to an Islamophobic smear campaign and behind-the-scenes maneuvering against him by certain factions within the party, but he was almost immediately named Deputy chair by Tom Perez, the man who beat him.

On June 5, 2018, Ellison announced that he would not be seeking re-election to his congressional seat, but would instead run for Minnesota Attorney General. On August 14, 2018, he won the Democratic Primary for the AG nomination, before winning the general election on November 6. He was sworn in on January 7, 2019.[4]

This politicians-related article is a stub.
You can help RationalWiki by expanding it.
Retrieved from "https://rationalwiki.org/w/index.php?title=Keith_Ellison&oldid=2441854"
Categories:
Hidden category: