Unite the White Right (UTR) was an alt-right riot performed by a blend of Republicans, neo-Confederates, neo-Nazis, white nationalists, Klansmen, white supremacists, antisemites, Kekistanis, self-proclaimed red-baiting anticommunists and Identitarians on August 11 and August 12, 2017. UTR ended with three people dead: one killed directly by one of the UTR participants, and the other two killed indirectly in a police-helicopter crash. The "protest" ultimately ended in failure, with public opinion turning against the alt-right, the Daily Stormer getting kicked off Google, the arrest of some UTR protestors, and mass crackdown and suspension of alt-righters.

) planned to remove a statue of Robert E. Lee. Predictably, this act upset white supremacists, who organized the rally in response. A counter-protest was also formed by various anti-racist groups. The alt-right earlier had held a rally on May 14, 2017, with a torch parade similar to the August 11 brawl, and the Ku Klux Klan had held their own rally on July 8.

The scheduled speakers for the event were the following:[2] 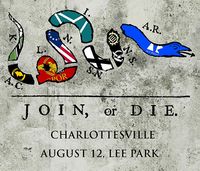 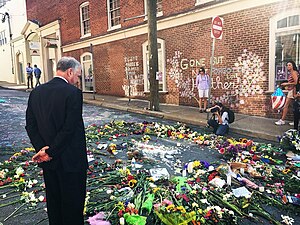 Senator Tim Kaine at the site of Heyer's murder.
See the main articles on this topic: James Alex Fields Jr. and Blaming the victim

A guy who sent a Hitler pic to his mom[8] thought it would be a good idea to drive a car through a crowd of the counter-protesters, killing a woman named Heather Heyer and injuring 19 other people. The attack was livestreamed by counter-protesters.

Neo-Nazi internet rag The Daily Stormer (TDS) called Heyer a "fat childless slut"[9] (as a result, GoDaddy, Google and Zoho decided not to maintain TDS's DNS),[10][11] and foreign "skeptics" such as Sargon of Akkad promoted the white nationalist canard that she died of a heart attack.[12][13]

Default judgments were held against 7 of the defendants for refusing to comply with court orders.[15] All defendants were found liable for more than $26 million in total damages under Virginia state civil conspiracy law, but no verdict could be reached on simultaneous federal conspiracy charges that required a higher level of evidence.[23]

See the main article on this topic: 4chan

Following the attack, /pol/ started "researching" who the driver was, falsely concluding the driver to be Joel Vangheluwe.[24] Sadly, certain media outlets took the bait. Vangheluwe, being an innocent man, was not arrested, but he was mercilessly harassed.[25] Instead, a neo-Nazi named James Alex Fields Jr. has been convicted of second-degree murder in the case.[26] Fields had been seen at the rally wielding a Vanguard America shield, although the organization later claimed not to be associated with Fields.[27]

These media groups took 4chan's bait and propagated the false accusation against Vangheluwe.

It wasn't just the killing of Heather Heyer. There were other violent acts committed by the UTR protestors, such as the beating of a black man named DeAndre Harris, the shoving of shields into counter-protestors who were obstructing them entering the park by a Florida division of the League of the South and members of the National Socialist Movement and Traditionalist Workers Party, and a Ku Klux Klan Grand Wizard shooting a gun.

Jason Kessler, the man responsible for organizing the rally, was sentenced to 50 hours of community service for punching James Taylor.

Jacob Scott Goodwin, who was a member of neo-Nazi Billy Roper's Shieldwall Network and Traditionalist Workers Party and who wore an "88" pin and TWP pin during the rally, was convicted of maliciously wounding DeAndre Harris at the rally.[34]

In September 2018, four California men were charged with violating the federal rioting law by traveling to Charlottesville "with the intent to … commit violent acts in furtherance of a riot."[35] The indicted men, "Benjamin D. Daley, 25, of Redondo Beach; Thomas W. Gillen, 34, of Redondo Beach; Michael P. Miselis, 29, of Lawndale; and Cole E. White, 34, of Clayton," are members of the racist and anti-semitic Rise Above Movement.[35] 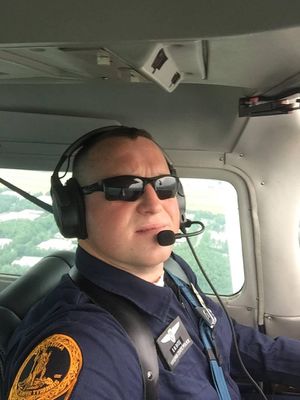 The helicopter which crashed was piloted by Lt. Jay Cullen, who was accompanied by Trooper Berke M. M. Bates, who was operating a video camera and taking aerial surveillance footage of the rally. Bates filmed the Dodge Challenger pressing the Toyota Camry from behind into the rear of the maroon-red Honda Odyssey which had been parked in the middle of 4th Street several minutes prior by Lizete Short, blocking the southern and only legal exit (onto Water Street) of the one-way street, which had no legal northern exit.

The helicopter then pursued the Challenger and filmed the arrest. This footage was introduced into evidence by the prosecutor Joseph Platania's assistant Nina-Alice Antony in December 2017, in combination with ground footage taken from the window of the Red Pump Kitchen restaurant. Both of these videos were then sealed for a reason left out of the court transcription, but which Judge Robert Downer and replacement defense attorney Denise Lunsford agreed to. When the FBI took over the case in 2018, the two videos remained sealed and banned from public viewing.

The crash happened 3 hours after the Challenger hit the Camry, as the helicopter was rerouted to aid in escorting the vehicle of the Governor of Virginia.

President Donald Trump's response was quite delayed and insidious; rightfully, this pissed people off.[41] It is fairly certain that white nationalists, neo-Nazis, and alt-right activists voted for Trump, if they voted for anyone in the 2016 Presidential election. "President Trump is rarely reluctant to express his opinion, but he is often seized by caution when addressing the violence and vitriol of white nationalists, neo-Nazis and alt-right activists, some of whom are his supporters."[42] Indeed, none of the other candidates for president ever displayed sympathy for any of these aforementioned ideologies, while Trump had done so on many occasions.[43] The maker of the parade torches used in the march, Tiki® Brand, in contrast to the President, was quick to disassociate itself with the pro-Confederate-statue crowd.[44]

Five days after the murder of Heather Heyer, members of ISIS carried out a similar terrorist attack

in Barcelona, Spain. Predictably, since the perpetrators were brown Muslims, Trump was quick to condemn the attack, which contrasted sharply with his slow, dishonest, and half-assed condemnation of white nationalist domestic terrorism.[45]

Things got even worse after Trump's massive criticism of the peaceful protests of black NFL players taking a knee during the national anthem (to raise awareness of racism and police brutality, by the way), slamming them by saying they should all be fired.[46]

By 2019, Trump himself, Scott Adams, Morton Klein (head of the Zionist Organization of America) with the help of Louie Gohmert, Steve Cortes (Trump advisor/sycophant and Fox News hack), Breitbart, and Prager "University"[47] have attempted to whitewash Trump's false equivalence of racists with anti-racist protesters.[48][49]

The hacktivist group Anonymous, in response to Unite the Right, has supposedly hacked multiple alt-right websites, even saying they are going to shut down The Daily Stormer. However, many think this is being faked by said websites for attention, since everybody hates them even more now and they may want to feign weakness so the mob/"freeze peach!" crowd comes to defend them.[50] The Daily Stormer in particular reportedly had gotten notice of being shut down soon by their webhoster before the "hacked" message appeared.

See the main article on this topic: False flag operation

Some people on the Conservapedia talk pages ranted about UTR being a false flag by teh leebrals in an attempt to discredit the right.[51][note 2] They claim that since this happened at the same time as the "Democrat Party" was involved in controversy, the left manufactured it to distract the MSM. The false flag conspiracy theory has also been propagated by Infowars, and US House Republican Paul Gosar of Arizona.[52] Gosar also brought up the debunked claim that George Soros was a Nazi collaborator.[52]

A couple weeks later, for a UVA football game ESPN decided to pull an announcer for happening to have the name Robert Lee.[53] Unsurprisingly, being of Asian descent, he was not actually named for the Confederate general.[citation NOT needed]