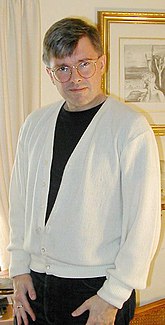 In high school Strom was introduced to the John Birch Society by a teacher. He eventually left as he felt that the organisation did not have enough emphasis on race, and instead became a disciple of the neo-Nazi William Luther Pierce, joining Pierce's National Alliance.[1]

During the 1980s he ran a pirate radio station, "The Voice of To-Morrow"[3], which had a rather infamous reputation among shortwave radio listeners, i.e. it was met with almost universal dislike for its openly white supremacist programming.[4][5] The format consisted mostly of interviews and commentary from white supremacist activists. During the 1990s he took his radio efforts legal with the show "American Dissident Voices", sponsored by the National Alliance and carried by whatever shortwave and AM stations were willing to sell them airtime.

William Pierce introduced Strom to Kirsten Kaiser, and the two married in 1990. They had three children, although Strom lost custody of them after reportedly abandoning one on the grounds that they were a "weakling". The two later divorced.[1]

After Pierce's death in 2002 Strom and his second wife, Elisha, were amongst the members of the National Alliance who got into a dispute with the leadership and started a split-off organization called the National Vanguard in 2005.[1][2][6]

An anti-semite, Strom has argued that Jews are "dominant and influential in debasing and deceiving white women and girls on such a massive scale" that they cannot be forgiven.[7] A 1993 essay of his, "All America Must Know the Terror That is Upon Us", coined the quote "[t]o determine the true rulers of any society, all you must do is ask yourself this question: Who is it that I am not permitted to criticize?" This quote, often misattributed to Voltaire, has since become a popular anti-Semitic/neo-Nazi canard.[8]

In 2006 Strom's home was raided and his computer seized; the following year he was arrested on five charges of possession of child pornography. In 2008 he pleaded guilty and was sentenced to 23 months.[2][7] The criticism that he received during this period led him to disband the National Vanguard.[1]