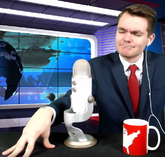 "If I pretend that I don't understand what you're saying, then you're being irrational." 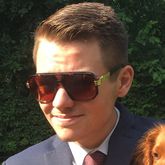 He operates and hosts the America First livestream podcast, which is currently hosted on a proprietary website after he was banned from both YouTube AND DLive. He previously co-hosted the Nationalist Review podcast with James Allsup, from its founding until January 16, 2018.

For an introduction to Fuentes' political beliefs (centered around "Marxist infiltration", "rootless global elites", and "invasion" by nonwhites), we recommend his blogpost "The Villain America Needs﻿". He begins with an apocalyptic tale about impending doom of the country:

The prologue to the legend of Nicholas J Fuentes:

My timely birth [in 1998] allowed me to watch on the nightly news the spoils of the American experiment squandered for one final time before the dying gasp of a once exceptional people as the free world and economic abundance of Ronald Reagan was inherited by the lizard people. To understand how far the country has come from the virgin constitutional republic born of the Revolution to the corrupt, unitary technocracy of a new Statist century. From George Washington to George W. Bush. Everyone knows the country is going to hell and if you don't then you're a liberal apologist arguing why the change your President promised you is all that it was cracked up to be.

He proceeds to blame the evil liberals and multiculturalism:

My generation is the generation of hopelessness. They don't see it that way because Buzzfeed can use upbeat stock background music, punchy graphics, and a self-righteous punk weakling to dress up cultural suicide as egalitarianism. But we know better. With George W. Bush we got a neoconservative Utopian who could not wage the culture war and when center right Dubya collapsed in 2008 we got a communist Islamist sympathizer whose entire candidacy and governance was wholly founded on the ignorance of the masses and a media that would just plain lie night after night.

And alleges that our entire culture has been "cucked" by some distant elites into believing scary untruths like "trans people exist" or "nonwhites are people too":

And in 2015, it looked as though we would have the proverbial "more of the same," "lesser of two evils," "business as usual." 2016 looked to be a grand orgy of stockholm syndrome induced cultural cuckholdry in which we, the free men and women of the United States of America, would grudgingly but unflinchingly elect either our third bumbling conservative Bush lite or our second white trash criminal Clinton. Having spent the entire century being blown up by IEDs in the desert. The worst economy since the great depression. The largest government in the history of the world. Flagrant lawlessness at the highest level. An invasion from the South and from the MidEast. An education system infiltrated and conquered decades ago by Marxists. A Bill of Rights in peril by the death of an actual conservative Supreme Court Justice, the last soul in the way of the loss of the republic. A terror state, a new Cold War, a billion people saying they own the ocean, more dollars in debt than atoms in the universe, Seth Rogen, boys are girls and girls are boys, facts are racist, feminism, infanticide as a right, Tumblr.[3]

It doesn't get better from there.

On April 2017, Nick Fuentes (then a host for RSBN) first argued that the First Amendment "was not written for Muslims":[8]

The First Amendment was not written for Muslims, by the way. It wasn't written for a barbaric ideology that wanted to come over and kill us. It was written for Calvinists. It was written for Lutherans and Catholics, not for Salafists, not for Wahabists, not for the Saudi royal family. Don't think the founders had that one in mind. And it also was intended for citizens, not for immigrants. If the First Amendment protected everyone's right to have their religion and express it in every country, we'd have our police in the Congo or in Uganda fighting against the Lord's Resistance Army. And you never hear that side of the story on the mainstream media, and why not? Why don't we hear about it? Why do none of our elected officials talk about this or like this? They know it's true. Why don't we hear about in the mainstream media? We don't hear about it on Fox News, by the way, either. And why not?

He proceeded to argue that "globalists" and "the people behind CNN" should be killed, directly calling for and inciting political violence against reporters and several dozen media executives:

Who runs the media? Globalists. Time to kill the globalists. I don't want to not watch CNN. I don't want CNN to go out of business. I don't want CNN to be more honest. I want people that run CNN to be arrested and deported or hanged because this is deliberate. This is not an accident. It's not, "Oh, you know journalists have a liberal bias because they're educated, and educated people tend to be" — none of that. It is malicious intent. There is a design, there is an agenda here. And the people behind CNN that are pushing outright lies, and you see the people who try and expose the truth are cut off so obviously. They get their mics cut off, and they say, "Oh, whoops! We've lost the signal! Technical difficulties!"

RSBN issued an apology, asserting that the above was said "in jest".[9] He was later removed from RSBN.[10]

Fuentes genuinely believes that different races are not just biologically, but spiritually different.[11] Fuentes calculated his own "spiritual whiteness" at 91%.[12][13] A voluntary DNA test from 23&Me revealed his ancestry as 79% European and 14.8% Native American. Of course, some of his followers immediately told him Ancestry.com was better, as 23&Me "lied" to "mess with racists".[14] The accuracy of these racial DNA tests are of unknown and unvalidated accuracy.[15]

On March 6, 2019, Fuentes held a public event at Iowa State University in Ames, IA. Fuentes actually didn't have permission to speak in a University classroom, and was ejected by the police and sent to a designated Free Speech area. He delivered a speech in the cold at 8:00 PM to a group of mostly detractors. Two conservative student organizations located near the University both denied involvement, but the Iowa State Daily reported that the local Turning Point USA chapter was the most likely candidate. Incidentally, that TPUSA chapter had lost its Student Organization privileges in Fall 2018, explaining why Fuentes was kicked out by University police.[19]

Nick Fuentes thinks the Holocaust didn't really happen that much. Speaking in an openly-published video about Adolf Hitler, a smiling, gleeful Fuentes spoke of "the two hundred to three hundred-thousand Jews that he killed during the Holocaust" and "those two hundred to three hundred-thousand Jews". This is a common Holocaust denial lie by Nazis to deliberately downplay the gigantic scale of the monstrous crime that was the Holocaust. The empirically-proven number of Jews murdered by Nazis is 5.6 to 6 million, which is 20 to 30 times larger than Fuentes' lie.[20]

Nick Fuentes has recently started going further and further off the deep end by giving advice to radicalized right-wing extremists on how to avoid getting caught, telling children the following:

Nick Fuentes believes there is an "LGBT agenda".[22]

Fuentes claimed that half of homosexuals are pedophiles on a livestream, and said that Sam Hyde "did the numbers". However, Hyde is a troll comedian known for extreme jokes, who had earlier clarified that he had made the claim in an effort to troll people.[23][24] In fact, a large study by the world renowned sexologist Ray Blanchard

, which measured the blood flow in the penises of men who were shown images of underage boys and girls, found that gay men were no more likely to have pedophilic interests than straight men.[25] Pedophilia is often mistakenly blamed on gay men since roughly a third of child sexual abuse victims are male. This is a logical fallacy, because most child abusers will molest a child of any gender given the opportunity. Since parents often guard their daughters from risk of abuse, child abusers will ultimately target boys due to ease of access and less risk of being caught. This is supported by the fact that the vast majority of identified perpetrators of the sexual abuse of boys are a heterosexually married relation of the victim.[26] The rest are unrelated to the child, for example, a priest, teacher or authority figure who are also frequently heterosexually married. Since boys are 50% of the population and much less guarded, a child molester has more opportunity to victimize a male child.

In January 2020 Fuentes joined CatboyKami (cat boy), a gay YouTuber and alt-right personality, in a day long livestream.[27] The catboy date generated controversy online, with many Fuentes fans speculating on Fuentes sexuality. Neo-nazi Richard Spencer went on an angry rant about Fuentes' appearance in the livestream with catboy.[28]

Fuentes apparently hates homosexuals so much that he was able to overcome his hatred of Muslims to side with the Taliban, pointing out that the group opposes "abortion, vaccines and gay marriage".[29]

Fuentes supports the Taliban's prohibition on vaccines,[29] believing that they're part of a conspiracy to poison the American people.[32] He has also referred to the coronavirus vaccine as "gene therapy" and linked it to the spread of AIDS.[33] He once threatened to take up arms against anyone who tries to give him a vaccine.[33][34]

Ordinary GOP conferences, like the once sober and serious but now populist, ideological and culturally reactionary Conservative Political Action Conference

,[35] aren't extremist enough for Fuentes. Instead, Fuentes and his fan base (who call themselves "Groypers" due to, naturally, a 4chan meme involving Pepe the Frog)[36] have, since 2020, organized an alternative event to CPAC called the America First Political Action Conference. The conference, according to its website, offers a chance for "true patriots" to "mingle with like-minded Americans fighting to save this nation."[37] According to the ADL, what this event is really about is a gathering for those who wish to normalize white nationalism and other extremist views (such as homophobia, misogyny, antisemitism, racialism, and extremist anti-immigration viewpoints) into the conservative movement.[38]

The event has attracted the sort of noxious GOP speakers that you would expect, e.g. politicians long associated with white nationalist and/or extremist anti-immigrant rhetoric, such as Paul Gosar, Steve King, Michelle Malkin,[39] and Marjorie Taylor Greene.[40] Other guests include racists such as Jared Taylor, alt-right trolls such as Baked Alaska and Milo Yiannopoulos, and assholes such as Joe Arpaio.[38]

The event, and particularly the appearance of national GOP politicians at them, have often aroused controversy due to the extremist rhetoric at the event, especially the rhetoric coming out of Fuentes. In 2021, Fuentes wailed about America losing its "white demographic core" and defended the participants of the 2021 U.S. Capitol riot, even proclaiming that "we need a little bit more of" the sort of "energy" displayed by the insurrectionists. ref name="afpacabc"/> In 2022, Fuentes complained about diversity in America, stating that America's secret sauce was "young white men".[41] He then praised Vladimir Putin for his unprompted invasion of Ukraine that was happening while the 2022 AFPAC event was going on, leading to a chant of "Putin! Putin!" from the crowd.[41] "Joking" about the general distaste for Putin's invasion in most non-white nationalist Western media, he even offered up a bit of coded praise for Adolf Hitler.[40]

Fuentes and fellow-Nazi Baked Alaska both participated in the 2021 U.S. Capitol riot that was incited by Donald Trump, and each separately livestreamed the destruction and theft that occurred.[42] Subsequently, Fuentes was banned from DLive, the streaming website he had been using to host his "America First" podcast since being booted from YouTube. Fuentes claimed that he did not enter the Capitol building, but with all of the other lying that he does, we are skeptical to take him at his word.