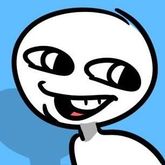 StoneToss, also known as MineralMotion, PebblePunt, RockThrow, GravelChuck and other, similar names by his detractors, is an alt-right webcomic seemingly from the same creator as RedPanels due to the similarities between[2] the content and the art style and patterns used in both comics.[3][4] What started as a racist comic then became outright white supremacist when he transitioned to writing comics as "StoneToss". He has a nasty tendency to create more benign comics in an effort to try and disguise his more heinous ones.

See the main articles on this topic: Transphobia and Homophobia

Because accepting trans and gay people clearly leads to paedophilia and bestiality. To literally no-ones surprise, it doesn't.[5] The irony is that it's usually Conservatives that have issues with pedophilia and child abuse among their ranks.[6] Note that StoneToss commonly depicts LGBTQIA+ people with colored hair and trans women with facial hair.

StoneToss cartoon mocking suicide (by hanging) among the transgender community.[7]

StoneToss trying to paint transgender individuals as having a high rate of suicide. The "40%" statistic refers to a 2015 study by the National Center for Transgender Equality that found that approximately 40% of trans people have attempted suicide at some point in their lives.[8] The statistic has been removed from context and used as a dogwhistle by StoneToss to claim that being trans is a mental illness, and that 40% of trans people commit suicide.

Because transphobia obviously has nothing to do with the unusually high suicide rate. Or is it that reducing stigma and discrimination against transgender people actually saves lives?[9]

See the main articles on this topic: Sexism and Misogyny 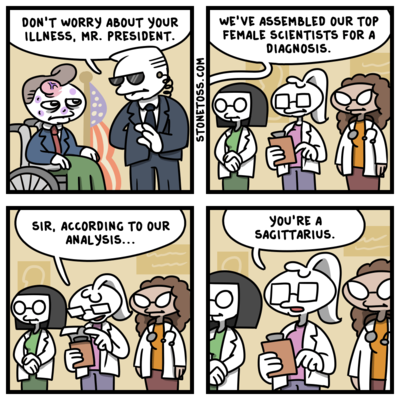 Oh, those silly women, playing at being doctors![11] Could've at least written an actual joke regarding a particular zodiac sign involving crabs.
In a cross-sectional study by the Journal of the American Medical Association (JAMA), it found that patients treated by female doctors had significantly lower mortality and readmission rates than male doctors,[12] proving, once again, that StoneToss is an uninformed bigot. 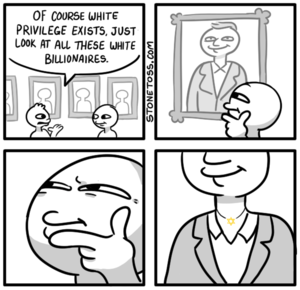 "It's funny" because the billionaire is (allegedly) Jewish[13] 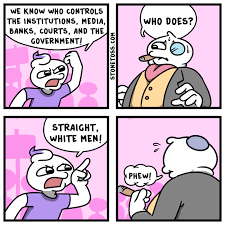 In the minds of anyone that isn't anti-semitic, it doesn't matter whether billionaires are Jewish or not, but there are plenty of billionaires that aren't Jewish, such as Jeff Bezos (richest person on Earth), Bill Gates (2nd) and Elon Musk (3rd). However, Jews make up at least 5 of the 10 richest Americans.[15] However, this has an explanation. From the 12th to the 17th century, Christianity had laws against usury, which is lending money with interest. Halakha (Jewish law) did not prohibit usury to goyim (non-Jews) however, which allowed them to earn quite a bit of money by filling that niche. 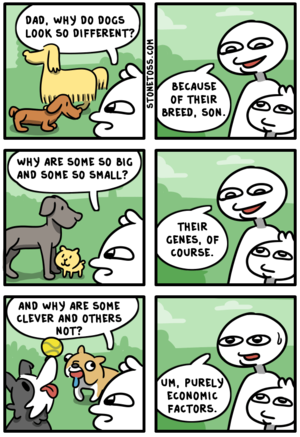 He managed to make the dumbest possible comparison here.[18]
Unlike dogs, humans have not been selectively bred for any specific purpose, Alien Uplifting conspiracy theories aside. While there are occasionally some people who propose we do selectively breed humans to create "better" humans, this is known as Eugenics and it's a thorny issue to say the least. Human size differences after nutritional differences are eliminated are probably under 5% by mass if a couple of specific outliers are ignored. For dogs, two breeds might well be 5000% different in size, because dogs are extraordinarily diverse and they go through generations quickly as they reproduce 60 times faster. However, since the healthiest and smartest dogs tend to be mutts,[19] comparing humans to dogs would imply that humans should promote interracial marriages, leading to...

There is so much wrong with this...
1. Another example of the alt-right's weird fixation on interracial sex acts.
2. This piece of insane 'art' is titled "Refugees Welcum"[20] and there is yet no indication that the black person in question (or any other person depicted for that matter) is a refugee other than the racist assumption that black individuals are by default refugees, which is just incorrect.
3. The next layer to this metaphoric shit onion is that women are considered property to share, as if women (in this case white women) are the property of men.
4. The white socialist holding the hand of the woman is probably a reference to cuckoldry, another obsession that the alt-right has.
5. And being socialist doesn't mean being for open borders; Bernie Sanders, a self proclaimed democratic socialist, also opposes open borders.[21][note 1]
6. Finally, the fact that the black character allegedly representing the refugee is engaged in an act of oral sex and implied to be enjoying shared food and wealth (in the second panel), is a nod towards the common alt-right talking point that refugees are predominantly criminals, particularly rapists, and that they are economic migrants intending to steal benefits and jobs. This trope is used to back xenophobia in Europe and North America, despite the fact that refugees commit less crime on average than the native population,[22] and provide more to the economy than they cost in benefits and public services. 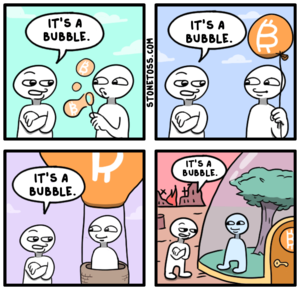 Bitcoin, in reality, is not stable enough to rely on and live off of,[23] and the technological components required to produce them are massive energy hogs[24] so yes, it monopolizes all resources at the detriment of everything else.[25] 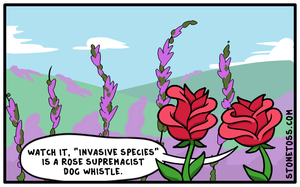 Funny how he compares roses, a group of flowering plants known for consuming a lot of water and resources,[citation needed] with white people. Also, this is the incorrect use of the ecological term "invasive species" (a species that is not endemic to a region, whose impact has altered the environment of the region) when the Nazi cartoonist Stonetoss doesn't specify which region he is referring to. As far as we know, the roses depicted here could be the invasive species. If he means Europe, lavender (the plant with the thinner, violet flowers) is actually native. It is also quite a poor analogy to compare legal immigrants to invaders, when they are allowed in by governments that are voted in by the people.

See the main article on this topic: Soy

Soy doesn't act like estrogen (a female sex hormone). Otherwise, it would be a viable and cheap hormone replacement therapy (HRT) option for trans women as well as treatment for polycystic ovarian syndrome

. Other than that, obesity can cause gynaecomastia

See the main article on this topic: Whataboutism 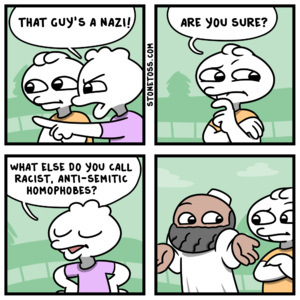 See, Muslim extremists are violent. And homophobic. And antisemitic. And, allegedly, racist. Therefore we get to be too![27] 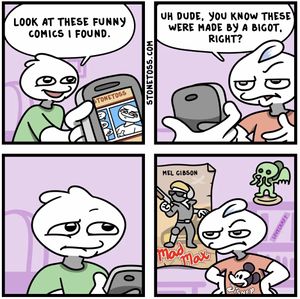 The Mad Max and Disney movies themselves are not bigoted alt-right propaganda pushed by talentless hacks. 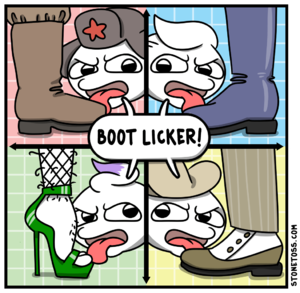 Notice the transphobia in the bottom left. Comics like this serve to both help his comics spread to people who consider themselves centrists and to obfuscate the fact that he is far-right.[28]

Look at all of the above comics and see for yourself how much of a "centrist" this guy is. His supporters claim his comics are satirical, but when he has comics making fun of the opponents of Holocaust denial and "race realism", both of which are only popular on the far right, while not making fun of even marginally right wing ideas unless the punchline is they're not right-wing enough, it makes this lie clear: the "satire" defense is trite and lazy. Nevertheless, comics like this one give him a veneer of neutrality that can make a bit more difficult to convince his fans that he's a Nazi. 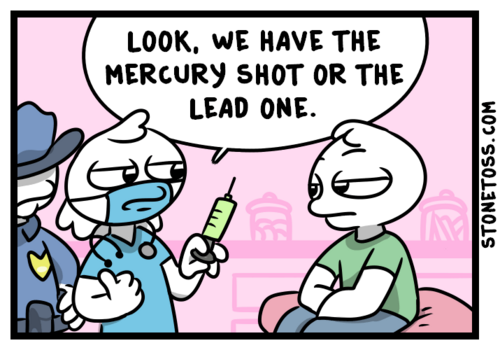 When arguing against vaccines, he went with the oldest PRATT in the book.

The mercury thing's been debunked over and over and over again, the amount of thiomersal in vaccines was way too small to be significant, there is no evidence that it causes any harmful effects in those amounts, and most vaccines don't use thiomersal anymore anyway.

StoneToss briefly had a page with Hatreon, the self-aware "anti-SJW" knockoff of Patreon, prior to Visa suspending financial service to the site. After that, he used NewProject2, a minimalist "freedom of expression" membership platform (just like Gab and 8chan) that didn't have a complete privacy policy as of February 2019.[32] The comic had fourteen supporters as of April 2020. The NewProject2 was eventually shut down.

Stonetoss's official subreddit, banned on 18th March 2019, was a Neo-Nazi hive. The official reason given by Reddit was, "This subreddit was banned due to a violation of Reddit’s content policy against creating or repurposing a sub to reconstitute or serve the same objective as a previously banned or quarantined subreddit".[33] This ban came a few weeks after the banning of an associated Discord server.[34]

In 2020, either a fan or someone within the creator's circle created a TV Tropes article about the comic, which was later deleted and salted after discussion decided there was nothing salvageable about the page, that it was impossible to describe the work in a neutral manner, and also because of concerns about his fanbase brigading the article.[35] This is a rather special case, as TV Tropes normally keeps articles on hateful works.[36] Of course, the article's creator was also banned from the site.[37]

In November 2021, Stonetoss decided to dip his toes into the world of crypto art by launching his own collection of 5000 Non-Fungible Tokens (NFTs) called "Flurks," each depicting one of the humanoid characters he uses in his comics, but with randomized features and clothing. However, one day after the minting day, his collection was banned off of OpenSea[38] and Rarible,[39] two major NFT trading platforms. So much for decentralization?

Good one. He's not banned yet, though.

Due to their exploitability as a meme template, Stonetoss comics have commonly been parodied/edited for meme purposes by online leftists, usually with Stonetoss's website URL replaced by the phrase "Stonetoss is a Nazi." For instance, the Reddit community r/antifastonetoss has managed partial success as a parody and deplatforming effort, even temporarily overtaking his amount of followers.

In 2020 and 2021, edits of Stonetoss' comics with people replaced with characters and intentionally bastardized references to the popular game "Among Us" also became a popular internet meme.[40] So much so that, unfortunately, Stonetoss played into it.[41]