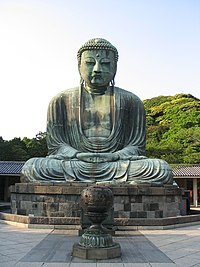 The Great Buddha of Kamakura

Asian values, or Asian customs and values, is a cultural and political ideology that defines elements of social norms, ethical values, traditional customs, belief systems, political systems, artifacts and technologies common to the nations of East and Southeast Asia.[1]

The ideology of Asian values has primarily been associated with and discussed in certain East and Southeast Asian countries at the time, most notably Singapore, Malaysia, China, Japan and South Korea, but has also generated some discussions in other parts of Asia, such as India. It aims to use commonalities – for example, the principles of collectivism or communitarianism – to unify people for their economic and social good and to create a pan-Asian identity. This contrasted with and challenged the perceived Western ideals of individualism, which is felt as incompatible for the region.[2]

Asian values are usually thought to be incompatible with Western liberal democracy or individualism. Asian values favor collectivism, strong leadership, and an organized society to address its needs. They give positions of power through their own democratic processes. The idea is based on societal governance and principles, without forcefully adopting Western values or assuming Westernization as mandated in neoliberalism.

The concept's popularity slightly waned after the 1997 Asian financial crisis. Asia then lacked a coherent regional institutional mechanism to deal with such crises.[5] A few months after the crisis, The ASEAN Plus Three (APT) was conceived in December 1997 with the convening of a summit among the leaders of ASEAN, China, Japan, and South Korea. The APT Summit was institutionalized in 1999 when its leaders issued a joint statement at the 3rd APT Summit. It determined the main objectives, principles, and directions of APT countries. It resolved to strengthen and deepen cooperation at various levels and in various areas, particularly in economic, social, political, and other fields. Asian values were further reinforced with the signing of Regional Comprehensive Economic Partnership (RCEP). It was the first free trade agreement between China, Indonesia, Japan, and South Korea, four of the five largest economies in Asia at the time of its signing.[6]

The idea of Asian values has been criticized by leftists within Asia and by some human rights groups in the West, accusing the ideology as inherently authoritarian. Critics point out that it may perpetuate issues surrounding gender-based discrimination, homophobia, and strict attitudes toward children, also known as tiger parenting.

Because of Asian values, while various nations in East and Southeast Asia can be as economically rich as the Western world, with some even more so, it has a much more conservative, semi-authoritarian attitude and a deferential social culture than the West. This could explain why many Western conservatives or alt-rightists who are against political correctness and multiculturalism often praise East and Southeast Asian societies, who seek to emulate it back in the West.